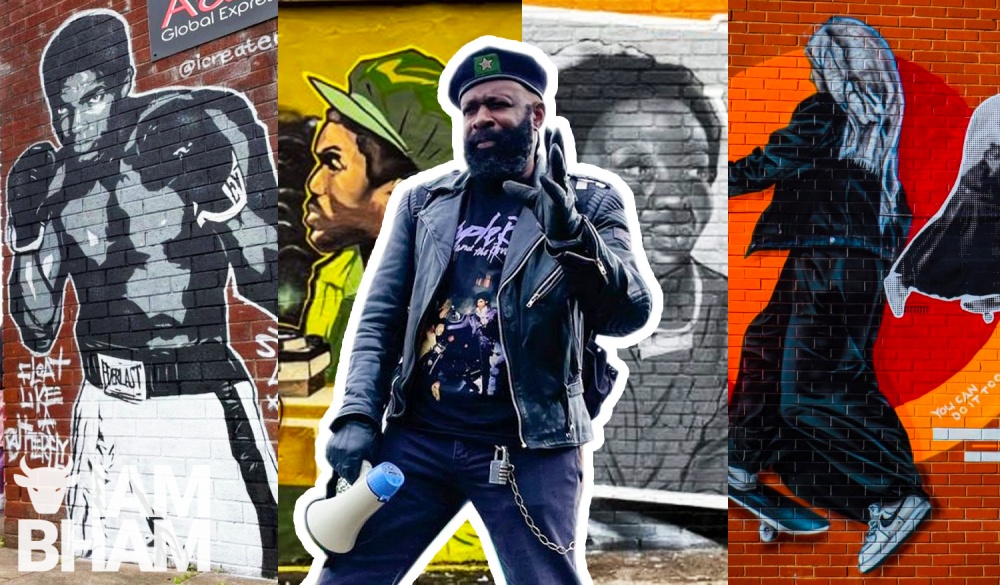 A series of stunning murals have been unveiled throughout Lozells in Birmingham as part of an interactive arts trail created to inspire local residents.

The colourful artworks have been designed at 10 different locations across the north Birmingham neighbourhood by artist Bunny Bread as part of the Gallery37 project, a city-wide 3-year visual arts project helmed by community social empowerment organisation Saathi House.

Dubbed ‘Downlow’ and launched in Georges Park last Saturday (October 23), the vibrant mural trail is tied together by interactive QR codes which visitors can scan on their phones to find out more about the story behind each street art presentation, or alternatively have a nice stroll around the area to view the bold urban creations.

Commissioned to “re-animate” and bring together local communities and encourage more physical exercise post-lockdown, the series of murals have been primarily funded by Arts Council England and produced in partnership with The Active Wellbeing Society, Sport England and Punch Records.

Among the innovative artworks aiming to connect with the local population are tributes in Heathfield Road and Lozells Road to the Windrush generation of nurses “who saved the NHS”, a portrait of boxer and civil rights activist Muhammad Ali; and flowers to commemorate all the lives lost during the ongoing pandemic.

“There is no better time to celebrate the NHS nurses who swooped in during Windrush and became the backbone to a failing structure at the time,” Bunny Bread said at the Downlow launch.

Additional artworks portray a young Muslim skater girl who consented to her likeness being recreated on a wall in George Street, and an African proverb illustrated on large letters on the same street.

Artist Bunny, who is also an established DJ and designer, collaborated on the community arts project with Jason Caballero and Simone Linton; who form creative group ‘Create Not Destroy’. The trio said their work reflects empowerment of the “ecosystem that lives within the community”.

With a mission to transform ten walls with untold stories, quotes and thought-provoking activism, the artists also used the opportunity to also update murals previously created in Georges Park, working with local residents to spruce up a key recreational spot in the area.

Leading the mural trail launch, Bunny told residents it was “designed for distance! Street art is not just about Digbeth.

“The Commonwealth games is coming. When people come to Birmingham, I want people to be like ‘there’s some great art in Lozells too’.

“There’s economics to art. People will visit the murals and buy food, which will hopefully continue to invest in Lozells.”

Speaking to I Am Birmingham, Bunny Bread said: “With the art trail now complete I hope its a mark of inspiration to all those live and come through Lozells and that people will stop and enjoy.

“One of my aims as curator is to sow the seeds to an ever growing art legacy and that this is just the beginning.”

Mashkura Begum, chair of Saathi House, said: “Creating public artworks that are local and accessible to our communities is incredibly important in north Birmingham, especially in areas such as Lozells, Handsworth, Perry Barr, Erdington and Aston.

“We want to ensure we work with talented artists from these communities to produce engaging art that reflects the stories and experiences of residents in these very neighbourhoods.

“We want this to be their opportunity, their space and essentially a representation of their voice, which often gets missed in the sphere of celebrated public art in this city.

“What Bunny Bread and his fellow artists are doing here is dynamic and exceptional, the impact of their work will transcend its original purpose.”

As part of Birmingham’s Gallery37 creative development project “bridging multiple locations through participatory creative activities and social action”, producers aim to “kickstart the creation of up to twenty new public artworks”; including an upcoming mural at Saathi House in Aston, celebrating local pride, with support from Aston Villa Football Club.

“Saathi House has worked to empower local communities struggling with access to active and artistic opportunities for over 40 years and we continue to do so. When they see these murals, it will inspire them in ways that will have a lasting impact. This is why this Gallery37 is so important,” added Mashkura.

Lozells ward councillor Waseem Zaffar, cabinet member for transport and the environment, said: “I was awestruck by the amazing work from Bunny Bread and his creative team.

“The murals they’ve created represent many untold stories from the community of Lozells and not only will all of these public artworks positively engage local residents but they will unite the diverse communities of Lozells, using arts as a vehicle for change.

“This is an incredible project. Thank you to everyone who has been involved, in particular Bunny Bread.”

Lozells Police team attended the launch and commented: “Great to see more amazing work in Lozells adding vibrant murals that reflect the community, lovely to chat with Bunny and the passion behind his work.”