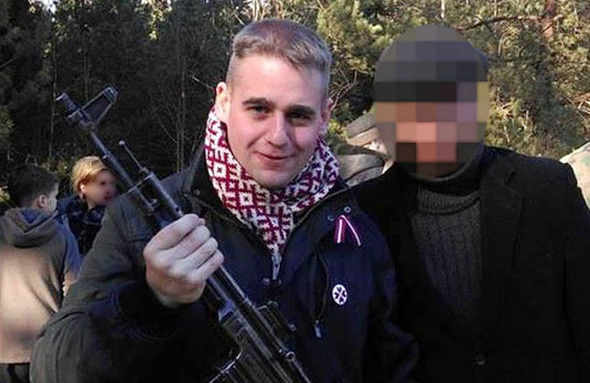 The co-founder of a UK neo-Nazi group described as “racist, Islamophobic, anti-Semitic, with an ethnic cleansing agenda which advocated attacks on LGBTQ+ people” has been convicted today of being a member of a banned extreme right-wing terrorist organisation.

Detectives from West Midlands Police Counter Terrorism Unit led the investigation which culminated in the arrest of Ben Raymond, aged 32, who was found guilty on Tuesday (30th November) at Bristol Crown Court following a four-week trial.

After last year’s arrest and conviction of four members of a neo-Nazi terror group at Birmingham Crown Court the crackdown against National Action continues as another member of the group is convicted. Co-founder of the group Ben Raymond faces jail after being convicted of terror charges at Bristol Crown Court.

The guilty verdicts were returned on the charge of Raymond being a member of the proscribed group National Action and two charges of possessing terrorist information, including guidebooks on how to make bombs and Molotov cocktails.

The court heard disturbing details about National Action and how members of the neo-Nazi group hoarded a disturbing stockpile of weapons which included a pump-action shotgun, a machete, ice-picks, a crossbow strong enough to bring down an elephant, swords, CS gas and rifles.

Raymond, from Swindon, was the co-founder of the terror group National Action which was formed in 2013, and in December 2016 it became the first right-wing organisation to be banned by the government since the British Union of Fascists was outlawed in 1940.

At the time of the group’s formation, Raymond was an undergraduate studying politics. During the trial, the group was described as “unapologetically racist, anti-Semitic and aggressive” as well as “secretive and paranoid”.

Members of the group shared Islamophobic and homophobic posts and advocated a “race war” which included targeting migrants. They used encrypted apps and messaging platforms with high levels of security to share information and Raymond would routinely wrap his phone in tin foil to block out the signal.

He was described as the public face of the group; giving media interviews and setting out their ethnic cleansing agenda. He was also the point of contact with other neo-Nazi groups in Eastern Europe, Norway and the US.

In an essay written by Raymond in 2015 he wrote: “We are carrying out a holy struggle to give the white European race its soul back, and to get justice for our people.

“Our flag is black and our motto is ‘long live death’, because only those who are willing to die for their beliefs are truly alive.”

Raymond was known as the ‘Head of Propaganda’ for National Action and he produced much of the online material which was inspired by the techniques used by Joseph Goebbels, the infamous Third Reich’s propaganda chief. Raymond also assisted other racist groups in the UK such as the Midlands-based KKK Mafia for whom he created images.

National Action was later proscribed after it celebrated and glorified the murder of the MP Jo Cox by white supremacist terrorist Thomas Mair in 2016. Raymond shared his sickening views on the various social media platforms used by National Action to spread violent and divisive views.

After the shocking murder of MP Jo Cox, members of National Action discussed which politician would be killed next. They finally settled on Birmingham MP Shabana Mahmood (Lab, Ladywood).

In February 2016 during a National Action demonstration in Liverpool, Raymond gave a controversial speech threatening to “gas traitors”.

Detectives from West Midlands Counter Terrorism Unit led the investigation into Raymond which followed a number of trials in recent years convicting several individuals imprisoned for National Action membership as well as other offences.

Despite the group being banned by the government the group’s former spokesman Jack Renshaw – an associate of Raymond – was apprehended and jailed for a terrorist plot to murder his local MP Rosie Cooper in Lancashire.

Police discovered that Raymond had also been been in contact with Zack Davies. In 2015 Davies had used a hammer and machete to attack a Sikh dentist in Flintshire. He was later arrested and given a life sentence for attempted murder.

After the government ban the group continued to flaunt authorities. National Action allegedly morphed into cells and operated underground.

One of the group’s leaders issued an email to members which stated: “We are shedding one skin for another … These are exciting times.”

Detective Chief Superintendent Kenny Bell said: “My detectives have been successful in bringing members of this group to justice over the last few years, many of whom have received lengthy jail sentences.

“As a result of these investigations, we saw a significant increase of right-wing referrals to our Prevent programme.

“Today’s verdict is a significant part of the chapter in dismantling this banned neo-Nazi group as Raymond was its co-founder.

“Extremists use this kind of ideology to create discord, distrust and fear among our communities and we strive to counter this. I would encourage people to report hate crime to us and it will be taken seriously.”

During the trial prosecutor Barnaby Jameson QC described Raymond as the “public face” of National Action.

Jameson added: “His jihad was fought with words and images.

“He was, like Joseph Goebbels of the original cabal of Nazis, the natural head of propaganda.

“He gave media interviews, setting out the group’s virulent ethnic cleansing agenda to the media with sometimes transcendental calm.”

Raymond did not give evidence in his defence. He was remanded into custody and will be sentenced on Friday.