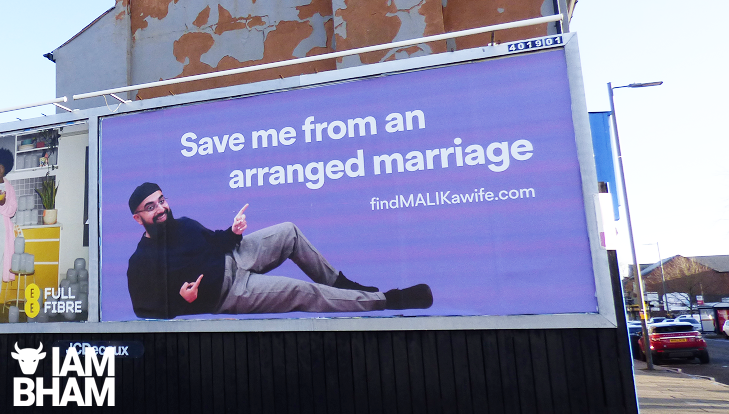 Billboards have appeared across parts of Birmingham featuring a Muslim bachelor in search of a wife.

29-year-old Muhammad Malik has forked out hundreds of pounds on a witty and unconventional public campaign in his quest to find a spouse.

The larger-than-life posters, which were pasted up on Saturday (1 January), show a picture of Malik cheekily smiling and reclining across a purple background with the humorous slogan “Save me from an arranged marriage” emblazoned across the billboard.

However, despite the advertising campaign looking like a prank, Mr Malik said he was very “serious” about the creative call-out.

“I’ve been searching for a partner who’ll work with me to grow our love for each other and Allah,” he said.

Malik also said the campaign had the blessings of his family, although he confesses he had to “convince his mum” to get her approval.

Malik, an entrepreneur who works in London as a bank consultant, explained that he was “not against” the idea of arranged marriage but wanted to try something different after struggling to find a life partner.

“I just want to try and find someone on my own first. I just haven’t found the right girl yet. It’s tough out there.”

His search thus far, which has included the common methods including dating apps and matrimonial events, have proved fruitless so he decided to literally follow the advice of a friend who suggested that he should advertise himself.

Mr Malik took the first step in that direction and created a website – findMALIKawife.com – which he followed up with the billboard campaign, noting “I had to get a billboard to get seen!”

The advertising hoardings have been plastered up in Birmingham locations and have been spotted in Sparkbrook, Perry Barr, Hockley Circus and Small Heath; while Malik has also been targeting cities with large Muslim populations including London and Manchester.

Discussing his ideal partner, Malik is hoping his ads will grab the attention of a young religious woman with a passion for spirituality to mirror his own.

“My ideal partner would be a Muslim woman in her 20s, who’s striving to better her deen (faith). I’m open to any ethnicity but I’ve got a loud Punjabi family – so you’d need to keep with the bants.

“Always personality and faith over anything else.”

The response has been positive and Malik has been inundated with such a huge response to his campaign that he’s marshalled friends to help him shift through the replies he’s receiving.

“I haven’t had the time to look through yet. I need to set some time aside – I hadn’t thought this part through.”

The billboards will remain up until 14 January.

(Visited 543 times, 2 visits today)
https://www.iambirmingham.co.uk/2022/01/03/muslim-bachelor-launches-witty-billboard-campaign-birmingham-find-wife/https://www.iambirmingham.co.uk/wp-content/uploads/2022/01/P3240624_pe-copy.pnghttps://www.iambirmingham.co.uk/wp-content/uploads/2022/01/P3240624_pe-copy-300x170.png2022-01-03T20:57:08+00:00Rangzeb HussainBrumFeedCommunityFaithHumourMuslim BirminghamNewsStreet LifeArranged Marriage,B'ham,billboard,Birmingham,Brum,Campaign,community,Coventry Road,Dating,England,findMALIKawife.com,Green Lane,Green Lane Masjid,Hockley Circus,I Am Bham,I Am Birmingham,London,Marriage,Midlands,Muhammad Malik,news,Perry Barr,poster,Rangzeb Hussain,Small Heath,Sparkbrook,UK,Wedding,West Midlands,wifeBillboards have appeared across parts of Birmingham featuring a Muslim bachelor in search of a wife. 29-year-old Muhammad Malik has forked out hundreds of pounds on a witty and unconventional public campaign in his quest to find a spouse. The larger-than-life posters, which were pasted up on Saturday (1 January), show a picture of...Rangzeb HussainRangzeb Hussain[email protected]AuthorI Am Birmingham
« Two Winson Green teenagers in hospital with gunshot wounds
Blazing inferno at Small Heath barber shop brought under control by 40 firefighters »