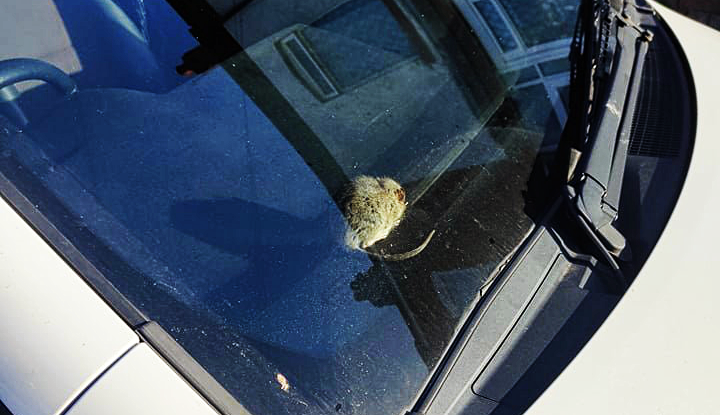 A rat was spotted inside a car in Fifth Avenue, Birmingham (Photo: IAB)

Public health concerns have been highlighted after a resident was left horrified when a rat was spotted crawling around the inside of a car in the Bordesley Green area of Birmingham this week.

The shocking picture was shared on social media on Monday (31 January) and local people have been left aghast as numbers of rodents increase in the area.

A local resident, who wishes to remain anonymous, and his sister were seated in their car in Fifth Avenue, Bordesley Green, when some movement was detected in a nearby vehicle.

Speaking to I Am Birmingham, the local man said: “Basically me and my sister were sitting in the car chatting and catching up and she noticed the rat first.”

The mortified observer added: “I went over to see and I couldn’t believe my eyes. I took a picture and then informed the owner of the car.”

It appears the owner is aware of the rat problem and is currently trying to sort out the issue.

The threat posed by rats to public health is serious. Rats are known to spread Weil’s disease – a form of a bacterial infection also known as Leptospirosis – through their urine, and rats are also notorious for causing major damage to internal wiring inside homes and vehicles.

There are also fears that an unsuspecting driver could panic while driving after spotting a rat or mouse scurrying around the dashboard of their car which could result in a motoring accident.

Since last Christmas the refuse collections in the Small Heath and Bordesley Green area have been disrupted – Birmingham City Council cites the COVID-19 pandemic for the delayed refuse collections – which has resulted in uncollected rubbish piling up in some of the streets.

The rotting rubbish has attracted pests and rodents and now it seems some have managed to find a way into parked cars.

The local man who witnessed the alarming sight is not surprised at the increase in the rat infestation around the local area and said: “It’s the norm these days in Birmingham. It’s normal to see the rats out in broad daylight.

“Birmingham is known for the rat problem. Birmingham City Council does nothing these days.”

Flytipping and missed refuse collections in the Small Heath and Bordesley Green areas are causing misery to local residents and people are demanding immediate action for a deep clean of the streets.

(Visited 2,466 times, 1 visits today)
https://www.iambirmingham.co.uk/2022/02/01/rat-spotted-crawling-inside-car-bordesley-green/https://www.iambirmingham.co.uk/wp-content/uploads/2022/02/Rats-01.pnghttps://www.iambirmingham.co.uk/wp-content/uploads/2022/02/Rats-01-300x173.png2022-02-01T19:12:46+00:00Abdul KareemCommunityHealthNewsB'ham,Birmingham,Birmingham City Council,Bordesley Green,Brum,community,coronavirus,COVID-19,England,Flytipping,Hygiene,I Am Bham,I Am Birmingham,Infestation,Leptospirosis,Midlands,news,Pests,public health,rats,Refuse Collection,rodents,Small Heath,streets,UK,Weil's disease,West MidlandsPublic health concerns have been highlighted after a resident was left horrified when a rat was spotted crawling around the inside of a car in the Bordesley Green area of Birmingham this week. The shocking picture was shared on social media on Monday (31 January) and local people have been...Abdul KareemAbdul Kareem[email protected]AuthorI Am Birmingham
« New Malik tribute painted in Small Heath after previous piece destroyed in Digbeth
Rapist who held woman hostage and stabbed her in the neck jailed in Wolverhampton »