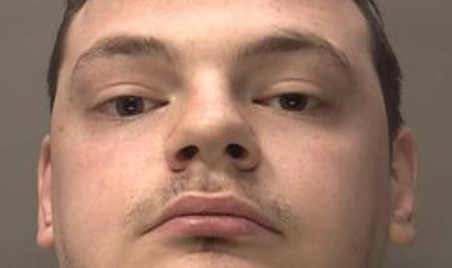 Luke Ward, 25, jailed for rape and attempted murder of a mother of two (Photo: WMP)

A violent sadist who held a mother hostage in her home and stabbed her in the throat will serve at least 14 years in prison for attempted murder and rape in Wolverhampton.

In August last year, Luke Ward forced his way into the terrified victim’s home where the woman – a mother of two little children – suffered a sickening ordeal that lasted for more than 34 hours.

The brutal monster raped the poor victim before stabbing her in the throat while her two young children were left alone in their bedrooms.

The stab wound to the neck was so savage that the knife blade reached the victim’s spine.

Despite losing a lot of blood, the brave woman managed to clean the wound and stop the bleeding, but her injuries were still serious and she believed she was going to die.

However, instead of allowing the woman to seek medical help, Ward continued his violent depravity. He threatened to kill her and continued his brutal sexual assaults against the injured woman.

The horrific nightmare lasted for more than 34 hours until the tormented woman, fearing for her life, finally found an opportunity to run for the front door, only just managing to slip from Ward’s grasp.

Once outside, local people immediately came to her aid and police were alerted to the horrific crime.

When police officers arrived at the scene they discovered that Ward had escaped through the back of the property.

Thankfully, the children were found safe and unharmed.

Ward managed to flee the city, but was apprehended and arrested the following day in London.

Luke Ward, aged 25 from Princess Anne Road, pleaded guilty to attempted murder, four counts of rape and sexual assault at Wolverhampton Crown Court on 20 October last year and was sentenced on Monday 31 January to life imprisonment to serve a minimum of 14 years.

Detective Constable Nikki McMurray, from the Public Protection Unit, said: “This was a terrifying attack on a woman who feared for her life and the welfare of her children.

“She has had to undergo a lengthy operation to repair a deep wound that reached to her spine. She has been left with significant scarring to her neck, so even if the memory of her ordeal fades, the scars are a constant reminder.

“I hope that knowing Ward is behind bars gives her some sense of security.”

(Visited 520 times, 1 visits today)
https://www.iambirmingham.co.uk/2022/02/02/rapist-held-woman-hostage-stabbed-neck-jailed-life-wolverhampton/https://www.iambirmingham.co.uk/wp-content/uploads/2022/02/Luke-Ward-1.pnghttps://www.iambirmingham.co.uk/wp-content/uploads/2022/02/Luke-Ward-1-300x178.png2022-02-02T14:33:23+00:00Abdul KareemCrimeNewsAttempted Murder,B'ham,Birmingham,Birmingham City Council,Crime,England,hostage,I Am Birmingham,jail,jailed,knife crime,London,Luke Ward,Midlands,murder,news,Police,Princess Anne Road,Prison,rape,rapist,Sex Crime,sexual assault,Stabbing,UK,West Midlands,West Midlands Police,WMP,Wolverhampton,Wolverhampton Crown CourtA violent sadist who held a mother hostage in her home and stabbed her in the throat will serve at least 14 years in prison for attempted murder and rape in Wolverhampton. In August last year, Luke Ward forced his way into the terrified victim's home where the woman -...Abdul KareemAbdul Kareem[email protected]AuthorI Am Birmingham
« Public health horror as rat spotted inside a car in Bordesley Green
Stetchford deaths ruled as “murder suicide” after man kills woman and then hangs himself »