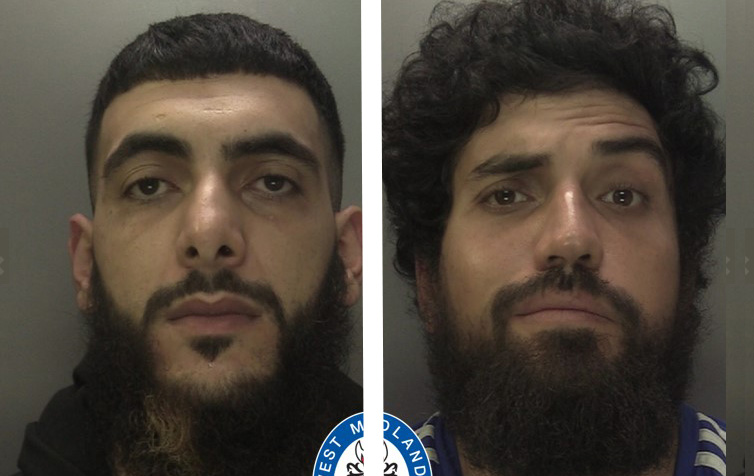 A West Midlands drugs gang have been jailed for a total of almost 50 years (Photo: WMP)

A gang who supplied cocaine and heroin across Birmingham and into Worcester have been jailed for a total of almost 50 years after police busted their County Lines drugs network.

The eight men pushed at least 5kg of Class A drugs onto the city’s streets over a 12-month period between August 2019 and July 2020.

Ahmed Kadoora ran the eponymous ‘KD’ County Line and was head of the crime group.

Police admitted they were unclear as to exactly how much the 30-year-old made from his drug dealing, but found him with a Rolex watch valued at £32,000.

The crime group included Khalid Alabdullah (34) – who converted his drugs money into gold bars – and Faiyaz Qazi (36) who collected the cash and supplied drugs to Faraz Rehman (31) and 33-year-old Sohaib Kassim who ran store houses.

Sibtain Hussain (39), Javed Ali (32) and 33-year-old Zaqib Hussain carried out the deals on behalf of Kadoora.

West Midlands Police (WMP) became aware of the KD line in February 2020 when Qazi was arrested outside a club in Worcester city centre for brandishing a baseball bat at door staff. He was later charged with possessing a weapon.

But crucially during police enquiries, information in Qazi’s phone uncovered the extent of the County Line and links to his fellow gang members.

One significant strike came on 26 June 2020 when officers found more than 800 wraps of Class A drugs in a car being stored by Rehman.

It was the single biggest drugs recovery during the investigation but extensive analysis of the group’s phone work helped police understand the scale of their offending and how much cocaine and heroin they were dealing.

Officers then arrested Kadoora, Alabdullah and Qazi during simultaneous warrants on 16 June 2020, with the other five gang members being arrested over the following days and weeks.

Qazi and Rehman denied being involved but were convicted following a trial that ended in December, while the rest all admitted conspiracy to supply cocaine and/or heroin. Today, at Birmingham Crown Court, they were all jailed.

Alabdullah was jailed for eight years and four months while Kadoora Qazi and Rehman were all handed eight-year terms.

Detective Constable Andrew Barker-Ellis from WMP Force CID, said: “These convictions followed a detailed investigation involving the analysis of lots of phone data; we evidenced the extent of their drug dealing and linked all the defendants to the KD line.

“The group made substantial financial gains through this activity and in the process caused significant harm in the community.

“We found drug dealing ledgers with a value in excess of £100,000. Kadoora was sending regular £10,000 instalments to Gibraltar, while others had access an Audi RS3 and Range Rovers.

“However, none of the defendants had a legitimate form of income.

“They’ve been rightly handed long jail terms but we’ll also now be looking to strip them of any cash or assets we can prove they’ve accrued through drugs.”

According to a West Midlands Police statement, County Lines offenders often exploit children or young people to run drugs on their behalf.

“If you feel in danger or are worried someone is getting you to do something you’re not comfortable with then we can help.”

What are ‘County Lines’?

The National Crime Agency defines County Lines as where illegal drugs are transported from one area to another, often across police and local authority boundaries (although not exclusively), usually by children or vulnerable people who are coerced into it by gangs.

The ‘County Line’ is the mobile phone line used to take the orders of drugs. Importing areas (areas where the drugs are taken to) are reporting increased levels of violence and weapons-related crimes as a result of this trend.

According to the National Police Chiefs Council (NPCC), a County Line is a term used to describe gangs and organised criminal networks involved in exporting illegal drugs into one or more importing areas (within the UK), using dedicated mobile phone lines or other form of “deal line”.

They are likely to exploit children and vulnerable adults to move and store the drugs and money and they will often use coercion, intimidation, violence (including sexual violence) and weapons.

Exploitation of young and vulnerable people

A common feature in county lines drug supply is the exploitation of young and vulnerable people. The dealers will frequently target children and adults – often with mental health or addiction problems – to act as drug runners or move cash so they can stay under the radar of law enforcement.

In some cases the dealers will take over a local property, normally belonging to a vulnerable person, and use it to operate their criminal activity from. This is known as cuckooing.

People exploited in this way will quite often be exposed to physical, mental and sexual abuse, and in some instances will be trafficked to areas a long way from home as part of the network’s drug dealing business.

The Children’s Society – who work with affected children from London, Birmingham and Greater Manchester – states County lines is “a form of criminal exploitation”.

“It is when criminals befriend children, either online of offline, and then manipulate them into drug dealing. The ‘lines’ refer to mobile phones that are used to control a young person who is delivering drugs, often to towns outside their home county.

“Children as young as seven are targeted. Young people aged 14-17 are most likely to be targeted by criminal groups but there are reports of seven year olds being groomed into county lines.

“Primary school children are seen as easy targets because they’re less likely to get caught. The grooming might start with them being asked to ‘keep watch’ but it soon escalates to them being forced to stash weapons, money, or become drug couriers.”

For more information from West Midlands Police on help to get away from gangs and for parents advice on how to spot the signs your child is being exploited, click here.