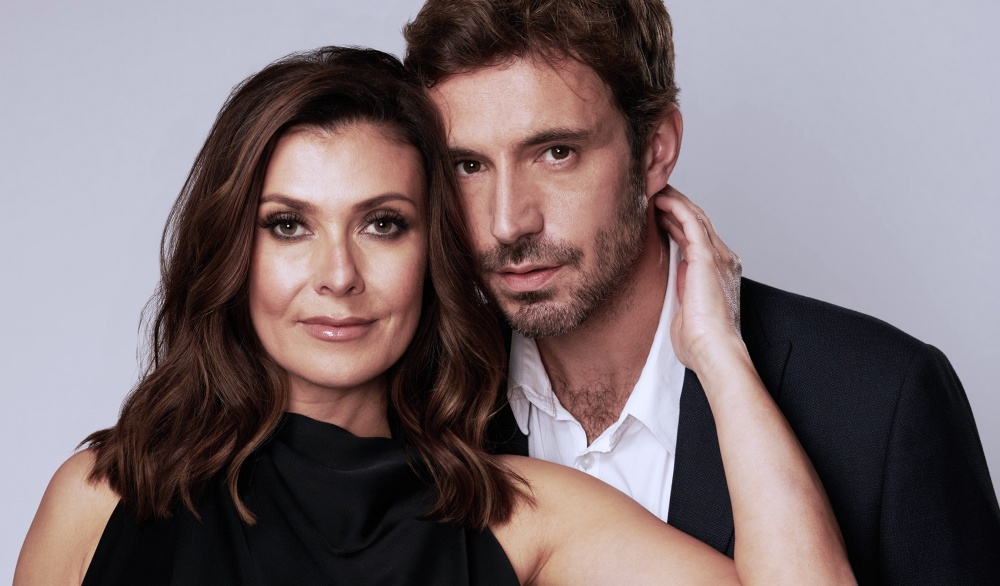 Fatal Attraction – a sexually charged film which shocked audiences in the 1980’s – returns to grip another generation in a psychologically complex and topical stage adaptation starring Coronation Street actors.

The play – which originally premiered in the West End under the direction of Trevor Nunn – now comes to The Alexandra theatre in Birmingham.

Coronation Street actors Kym Marsh and Oliver Farnsworth star in the stage version of Fatal Attraction at The Alexandra, and the adaptation boasts a new climax which was originally scrapped by producers of the film.

British director Adrian Lyne’s provocative 1987 revenge thriller Fatal Attraction, which was a worldwide hit with cinema audiences and garnered six major Oscar nominations, is revamped for the stage by James Dearden who wrote the screenplay for the original film version. However, the contentious themes of the original cinematic version are now wisely viewed through the modern era of #MeToo.

The questionable misogyny of the 1980’s film – which was aimed squarely at the character of Alex (played by Glenn Close) who has a causal fling with a married man (Michael Douglas) – is now filtered through with a deeper exploration of the psychological pain and alienation which leads to her ‘vengeful’ behaviour after she is dumped by her callous lover.

The torrid tale follows the repercussions following an intense affair which ends with the jilted woman seeking revenge on the shallow and insincere man who betrayed her love and affection.

Kym Marsh (Coronation Street, This Morning) who was part of the pop group Hear’Say takes on the role of Alex which was made famous by Glen Close in Adrian Lyne’s original horror themed slasher film.

She brings a seductive energy to the role, but unlike the original film where the character is seen as psychotic and unsympathetic, Marsh adds a deeper understanding for her negative actions. Her personality disorder is written and performed with a sensitive edge, and Marsh is compelling as she reveals the insecurities and loneliness suffered by Alex.

Whereas in the original film the underlining reasons for Alex’s disturbing actions are not given much time in the script, the stage version reveals that some of the mental health issues weighing down Alex stem from the controlling and manipulative mind games played by her coercive lover who is driven by power and by his libido.

Although she is voluptuous and enticing on the exterior there is a layer of vulnerability which Marsh captures beautifully in her portrayal of the psychologically wounded Alex. The issue of consent is presented in a really poignant and heartbreaking manner. Marsh may look like a vamp on the stage but she is less a sexual predator and more a victim who is ensnared and trapped in a world where society objectifies and controls women.

Oliver Farnsworth (Coronation Street, Hollyoaks) takes on the role of Dan, the married yuppie who preys on Alex’s alluring sexuality, and unlike the original film where the audience is instructed to see the character of Dan as the ‘hero’, in this stage version the tones have shifted and Farnsworth colours Dan as emotionally weak, manipulative, angry and controlling. He refuses to acknowledge any blame for the circumstances which led to his one night stand. This is a man who is quick at pointing the fingers of blame at others.

Farnsworth wants the audience to understand that Dan is a flawed character and that it takes two to tango when it comes to comes to one night stands. He fails to invest any emotional depth in his relationship with Alex. He craves the physicality and excitement, a release from his current existence where his life seems to have stagnated.

The audience’s sympathies and allegiances are no longer as surefooted as the film version. Dan is a man who enjoys flattery, and his morality has been muddied due to his work as a lawyer. This is a man who is willing to give into his carnal desires without hesitation yet is quick to blame the woman when the affair turns sour. More disturbingly, this is a man who has no qualms about using violence against his lover.

As Dan’s carefully constructed world begins to crumble around him following his infidelity he starts to reveal the darker and more violent aspects of his character. Farnsworth’s depiction of Dan is drawn from modern headlines of domestic violence against women. The real horror revealed by Farnsworth is how easy it is for a ‘cultured and educated’ man to slip and slide into an abyss of abuse culminating in physical and psychological torture.

Director Loveday Ingram’s decision to put the spotlight on the fractured psychosis suffered by both of the lovers results in a more realistic unfolding of the torrid tale. Her direction blurs the lines between ‘hero and villain’. There are only victims here. No one wins when it comes to the abuse of love and trust. Ingram turns the play into a clarion call for a much needed debate about violence against women.

Although set in New York – and the cast of this version employ convincing American accents – the themes in the drama are as potent and relevant here in Birmingham, England, as they are across the Atlantic.

The mental health and social issues, including moral dilemmas, surrounding physical relationships are often brushed under the carpet. The taboo topic rarely makes it beyond scandalous headlines. This stage adaptation of Fatal Attraction courageously explores the thorny topics of love, trust, abuse and betrayal.

The naturalistic approach employed by this stage play is so effective in laying out the dangers of coercive relationships that it could be tweaked and adapted for a youth audience and performed for a sixth form or college production and used as a tool to educate and arouse debate about the urgent issues surrounding sexual abuse and domestic violence against women.

The set design of the play by Morgan Large is spartan and evokes a cage where the protagonists are constantly trapped with their world closing in upon them. Back projections paint a world of skyscrapers and urban apartments, a sea of humanity where each person in the city is cast adrift on a bleak ocean of loneliness. Despite access to all kinds of communication devices such as mobile phones, laptops, etc, these people exist in a claustrophobic world where they rarely give voice to their unrealised dreams and hopes.  Regret and poor decisions are bubbling and eating away at the inner core of these haunted souls. The lean nature of the set makes the audience home in on the emotions and desperation of the two lovers.

Paul Englishby’s soundtrack is subtle and evokes a sense of urgency as the drama moves from light to dark. The opening chords of a new day, full of merriment and discovery, soon fade away to be replaced by the pulse of heartbeats as the darkness begins to penetrate the daily existence of the characters. Englishby retains the motifs from Puccini’s Madame Butterfly – which were a key part of the original film – and adds his own unique layers across the drama.

This remarkable and subtle stage adaptation of Fatal Attraction dares the audience to show empathy towards a misunderstood woman who is less a villain and more a victim. The disturbing subject matter is dealt with dignity and compassion.

The cast and crew behind this emotionally gripping production of Fatal Attraction have taken a scandalous 1980’s Hollywood thriller about a spurned woman seeking revenge and turned it into a powerful and topical piece that speaks to an audience in 2022.