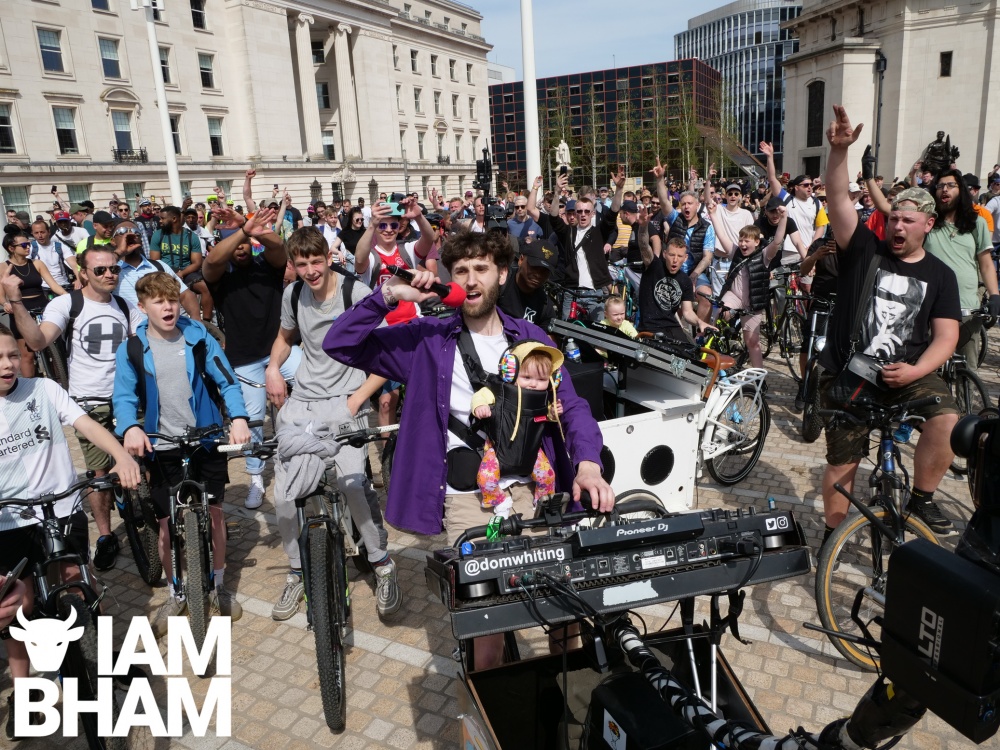 Around a thousand cyclists came out to join ‘Drum and Bass on the Bike’ as the mass gathering made a return to Birmingham.

Hundreds of excited cyclists and drum and bass music enthusiasts turned up outside the Library of Birmingham in Centenary Square to see DJ Dom Whiting launch the event for the second time in the city, one of many large bike rides orchestrated by the 26-year-old across the UK and Europe.

Led by London-based Whiting, they followed the artist on his custom-made three-wheeled bike, mounted with turntables attached to its handlebars.

Since hosting his first music-loaded bike ride a year ago to combat the lack of indoor music venues and nightlife during lockdown, the ‘mobile DJ’ decided he wanted to “take music to the streets”.

Whiting held his first Birmingham event back in July 2021, riding through Digbeth while DJ-ing drum ‘n’ bass music and leading fellow cyclists through the city centre, towards Edgbaston and into Cannon Hill Park, where he ended their big ride with a mini music chill-out session.

Just over 8 months later and the disc jockey returned to the city for another get-together with Brummie cyclists alongside any roller skaters, scooter riders, longboard and skateboard fans who wanted to join in.

Having had minor struggles with some steep uphill inclines on his last visit, Whiting picked a less arduous route this time around, deciding to begin in Centenary Square and work his way through Smallbrook Queensway, past the Bullring and Grand Central shopping centre, past Birmingham Children’s Hospital and up Newtown Row; and then back around for a nice finish at Aston University.

While the route also knocked off around 40 minutes from the journey time compared to his previous cycle ride, bringing it just under an hour in total, there was a last minute decision to bring the ride back to outside the Library of Birmingham rather than head to the university. This didn’t dampen any spirits, however, as cyclists continued to enjoy the music, joyously waved Ukrainian and Palestinian flags, set off coloured flares and cheered each other on.

Halfway through the journey, Whiting and entourage caught up with police officers who were trailing the cyclists. After asking if they would be following the ride, he thanked them and encouraged a “massive shout out to the police service” before carrying on.

Whiting says the aim of the bike rides is to bring positivity to people around him through physical activity and music.

“If I was just doing it on my own, maybe it’s not much of a buzz but now I’m still going, obviously there’s more people here and that’s like a motivation in itself to just turn up and unite everyone. I think the main reason I’m doing it is just the joy of doing it and it brings people together.” he told I Am Birmingham.

Asked why the rides were accompanied by drum and bass tracks, Whiting said that while he also liked house and techno music, “it’s just the whole thing of being on the move and being on the bikes, it’s not fast-paced as we’re not going that quick but I think it just gets people up and it’s energetic music bike rides so it suits it quite well.”

Whiting’s return to Birmingham was clearly a welcome one as an estimated thousand people came out to take part (some estimates place the figure much higher), dwarfing his last visit to the city.

Despite originally starting on his own, his UK-wide events take very little planning as word of upcoming get-togethers attract more and more people with each musically enhanced cycle outing. The ‘Drum and Bass on the Bike’ sessions have become so popular that Whiting has even taken the concept to Brussels and Ibiza, while his YouTube videos of his antics have amassed millions of views, with many recordings going viral.

More than 850 people were watching his Birmingham live stream on Facebook at one point, which has had (at the time of writing) more than 3,600 likes and over 1,000 comments.

Whiting believes part of the appeal of what he does is accessibility and openly welcoming all kinds of participation.

“We’ve got all ages here, all backgrounds, all walks of life, and touching on why I still do it, that’s probably one of the main reasons it’s probably still relevant and hopefully always stays relevant,” he said.

“I think uniting people from all walks of life is probably a very key part of these bike rides.”

Throughout his free and very public venture, Whiting has also been able to use his following to raise money for charity and believes it’s significant to use opportunities such as this to raise awareness about important social issues.

“Homelessness is at its peak and obviously this whole situation with refugees and Ukraine, there was a previous situation before that when at the time of me doing the charity ride, refugees were at the peak of [being] on the news front.

“So, I just think that these issues, while I don’t have a big voice in the world, I think just a small voice could make a difference to the situation in terms of homelessness and the refugee community. Unity wins.”

Originally from Birmingham, Sekina doesn’t live in the city anymore but said she wanted to come down to join the ‘Drum and Bass on the Bike’ ride.

“The weather’s good for starters and to keep fit, plus I’m a Drum and Bass fan so everything all in one.

“My cousins went to the one a couple of weeks ago in Bristol and said that was fantastic as well. People are coming from other places with their bikes, linking up with different people, it is a unity thing really, definitely.”

Simon Manning joined Drum and Bass on the Bike with family members Ros and her son Tarot Cross, travelling to central Birmingham all the way from Taunton in Somerset, and it wasn’t their first time taking part.

“We followed the guy Dom from Southampton, Bristol and now here. I’m a DJ, we’re all into music, Tarot loves this guy, he’s been following him online a lot, and it’s something he can come out and do with his family and see the country as well,” he said.

“I’ve pretty much got the cheapest bike here to be fair but coming here, I’m definitely thinking of upgrading my bike when we get back and getting more into cycling, without a doubt.”

Dressed up in his very best Peaky Blinders period attire despite the Easter weekend heatwave, John Irvin from Stokenchurch in High Wycombe brought along a customised bike to help boost music for participants and passers-by.

“I live in the same town, just around the corner from Dom [Whiting] so normally he picks me up in the van. I’ve got a load of speakers now, I started off with one, one on my back, two on the trailer and they all connect up to his system and I love doing it. I haven’t missed a UK one since Birmingham this one last year so I made the effort this year.

“I’ve always loved Drum and Bass and used to go to dance festivals all the time and because of COVID, it was hard to do those sorts of things, and he’s doing it on a bike and I bike from work everyday as it is. So them two things combined was a luxury for me and I live around the corner so it was all like the stars aligned for me, all my expendable cash I spend on this movement.

Expanding on what he meant by “movement”, he said, “I’ve always been at free parties and festivals where it’s P.L.U.R., Peace, Love, Unity and Respect. We’re not here to cause any hassle to anyone… we’re just a rolling movement, we’re going through the city trying to bring people happiness and joy, especially in today’s day and age with what’s happened in the last two or three years.

“Then that problem’s just finished, we’re all worried about Ukraine now so there’s always something in the news that’s bringing us down, so we need stuff like this to bring us back up. That’s what we do.”

Sporting a large Ukrainian flag bearing the words ‘D&B Army’, John wanted to show his support and solidarity to the people of the presently war ravaged nation.

“You only read what you read but there’s a country being invaded, why invade countries? There should be no borders!

“All people are united, all people are the same, it doesn’t matter about skin colour, anything like that, skin colour, race, religion, anything; it’s mental that people still go on about that. It’s danger, they call it ‘race’ as if it’s a race to the finish line, there’s no one in front or behind, we’re all the same, it doesn’t matter what mother you come from, we’re all under one mother.”

Joining others with this bike outside the Library of Birmingham, Robert Child from Coventry told I Am Birmingham the event helped him with his physical and mental health, saying it brought a smile to his face and kept him “focused”.

“Basically it’s opened my soul from what’s happening in my personal life, this is what I need, to get out, especially after lockdown and COVID and stuff like that.

“It’s a community thing and I like it, it’s something different, this is brilliant, look at it, great turnout, lovely weather, can’t go wrong.

Sisters Ellise, Kiesha and Chloe Grizzle joined the crowd on their roller skates so they could enjoy a day out with other music lovers.

Ellise, who told us she and her siblings have been skating from a young age, said: “We came here today because we heard there was an event with the drum and bass lot, so we thought it would be good to have a skate with some cyclists and enjoy some drum and bass.”

“We all like the outdoors, we’re all trying to get better with our skating, and it’s good fitness as well,” added Chloe.

“I like all types of music but drum and bass, yeah of course, especially when you’re in the mood for it and it’s sunny and you’re outdoors, yeah.”

Kiesha said joining other cyclists and skaters had a “beautiful vibe” and was a good opportunity to socialise, while all three smiling sisters agreed the event had “good energy” and was very friendly.

(Visited 411 times, 1 visits today)
https://www.iambirmingham.co.uk/2022/04/21/hundreds-people-join-dom-whiting-drum-bass-bike-return-birmingham/https://www.iambirmingham.co.uk/wp-content/uploads/2022/04/Drum-and-Bass-on-a-Bike-in-Birmingham-photo-by-Adam-Yosef-17.04.2022-photo-by-Adam-Yosef-227-800x600.jpghttps://www.iambirmingham.co.uk/wp-content/uploads/2022/04/Drum-and-Bass-on-a-Bike-in-Birmingham-photo-by-Adam-Yosef-17.04.2022-photo-by-Adam-Yosef-227-300x225.jpg2022-04-21T13:03:24+00:00Staff ReporterBrumFeedCommunityEventsMusicNewsStreet LifeTransportB'ham,bicycle,Bicycles,bike,bike ride,Bikes,Birmingham,Brum,Brummies,Centenary Square,City Centre,cyclist,Cyclists,DJ,DJ Dom Whiting,Dom Whiting,Drum & Bass,Drum and Bass,Drum and Bass on a Bike,gathering,Interview,John Irvin,Library of Birmingham,music,route,scooters,skatersAround a thousand cyclists came out to join 'Drum and Bass on the Bike' as the mass gathering made a return to Birmingham. Hundreds of excited cyclists and drum and bass music enthusiasts turned up outside the Library of Birmingham in Centenary Square to see DJ Dom Whiting launch the...Staff ReporterStaff Reporter[email protected]AdministratorI Am Birmingham
« Birmingham Rum Festival set to make a comeback in Moseley
IN PICTURES: Grimeboy at the Birmingham REP theatre »