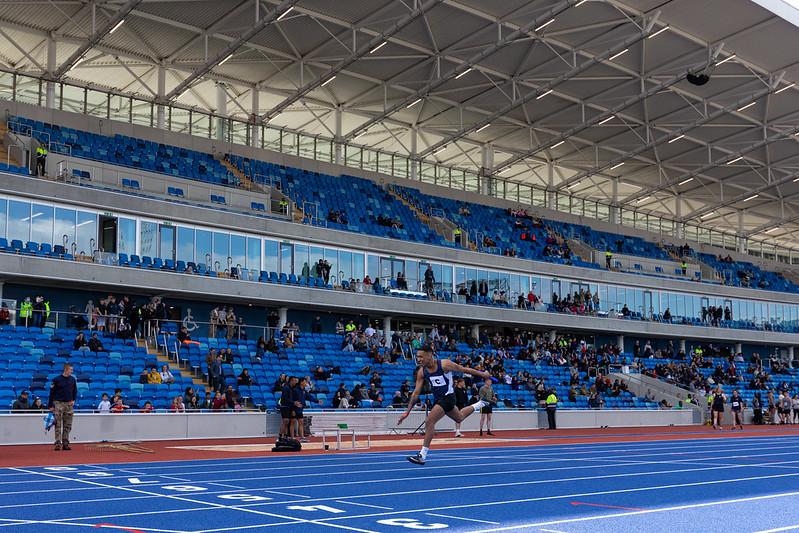 The UK Midlands Army Athletics Championships were staged at the Alexander Stadium in Perry Barr, Birmingham this week. (April 20).

This was the first athletics event at the venue since its £72million redevelopment and was one of the designated test events for the stadium to receive the required safety capacity certificate.

The Alexander Stadium will host Athletics and the Commonwealth Games opening and closing ceremonies.

Around a thousand spectators attended, made up of military personnel and their families, Birmingham City Council staff and families along with local residents and community groups.

Colonel Paul “Shove” Gilby, Commander Army West Midlands, said: “It’s a great honour for our service personnel to be the first people using this track. Only a few weeks ago it was covered in diggers. It’s awesome and what a legacy for the Midlands.”

Sergeant Danni Hodgkinson, 5 Medical Regiment, won the 800 metres yesterday finishing in a highly impressive two minutes 13 seconds, despite only recently recovering from a long-term achilles injury. She has represented England at 10K and 1500 metres and was the 2019 UK Armed Forces and Army Sports Woman of the Year.

Danni said: “I used to train here when I was doing a mental health degree with the Army and ran the British Championships here. It’s the first time I’ve been back. It’s a beautiful track. There’s something about a blue track that I find special, I don’t know why.”

WO2 Musa Audu, 6 Battalion REME, was another elite Army athlete at the Alexander Stadium. Musa is the Army Track and Field assistant team manager and is a former Olympics bronze medalist, at the 2004 Athens Games, with Nigeria in the 4×400 metre relay. Musa also ran in two Commonwealth Games and three times in the World Athletics Championships.

Musa said: “I’ve been to so many big stages like the Olympics but this stadium has a very fast track. I think it’s a good one for the kids coming up and this is an eye-opening event for the local kids around the area.”

The internationally famous Red Devils, the Army Parachute Display Team, jumped into the Alexander Stadium as part of the closing ceremony where the Army Cadet Forces Massed Bands performed.

“The stadium is truly world-class. I would like to thank the contractors, the project team and everyone involved in making this a reality.

“Hosting the Army Athletics Championships at the Alexander Stadium is just the start of an incredible summer of sport in Birmingham with the Commonwealth Games arriving in July and August.”

The revamped Alexander Stadium will provide enhanced facilities for the local community and existing tenants to use for generations to come and will establish a new teaching base for Birmingham City University. The redevelopment will also make the venue the largest facility of its kind in the UK, giving Birmingham a golden opportunity to reaffirm its claim to be the national home of athletics.