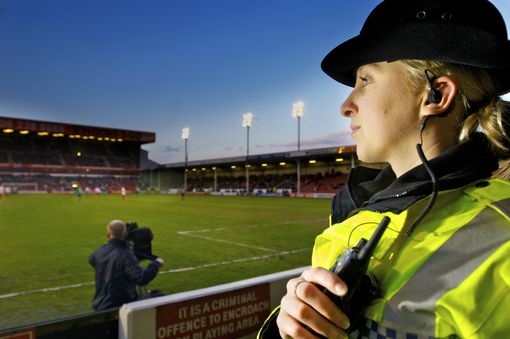 Five men have been arrested on suspicion of a variety of offences (Photo: WMP)

A large operation was in place for the football fixture, say police, but incidents broke out across a large area of the city on Saturday (23 April).

“The level of violence – which our officers put themselves in the middle of to protect people – meant some of our officers had to wear public order helmets, use shields and draw their batons, while continually warning people to move away.

“We understand how the scene may have scared people who had nothing to do with the violence.”

Bricks, bottles and objects were used as weapons in the hotspots around Digbeth and other areas between the stadium and New Street Station in the city centre.

Football Policing Unit and detectives from Force CID have now opened a joint investigation into the violence, working closely with both football clubs and supporter groups.

A spokesperson for the force said more arrests will come in the following weeks, “meaning anyone involved should immediately go to their local police station to explain what happened.

“Witnesses have been spoken to and CCTV is being reviewed alongside images posted online.”

Five men have been arrested on suspicion of a variety of offences including non-recent offences at football matches, racism, violent disorder and public order crimes.

Chief Superintendent Ian Parnell, said: “It is important to remember that despite how disruptive these incidents were and the fear they caused others, the behaviour of these people represented a minority.

“The violent behaviour was unacceptable and we will do everything we can to find those responsible so that they can be punished appropriately by the courts.

“We always push for the maximum punishment and we are supported by the clubs in this. Most fans just want to enjoy the game but a minority have ruined today for the majority.”

Around 150 seats inside St Andrew’s stadium were vandalised during the game. This is also being investigated.

In an incident before kick-off, a 30-year-old man was arrested on suspicion of wounding after a 60-year-old Millwall fan was assaulted before the game on Cattell Road.

Three men were arrested at the Walsall FC v Port Vale FC match. Two were held for a short period to prevent a breach of the peace while the third was arrested on suspicion of causing fear of violence.

“There was a large operation in place for today’s three games. Officers from across the West Midlands were called in to help, supported by dog units, drone teams and others, and cancelled days off. The clubs were each involved in creating and supporting those plans.

“Our preparations meant that we successfully stopped lots of incidents before they started and most people will never know about those.

“The security plans and the bravery of our officers also meant that we were able to quickly get things back under control in the multiple, sporadic locations covering a large area where people were intent on violence.”

There were no reported incidents at the West Bromwich Albion and Coventry City game.

Police are urging anyone involved in one of yesterday’s football related incidents or know who was, to message them via Live Chat on the West Midlands Police website, quoting reference number 810-230422; or alternatively anonymously call Crimestoppers on 0800 555 111.