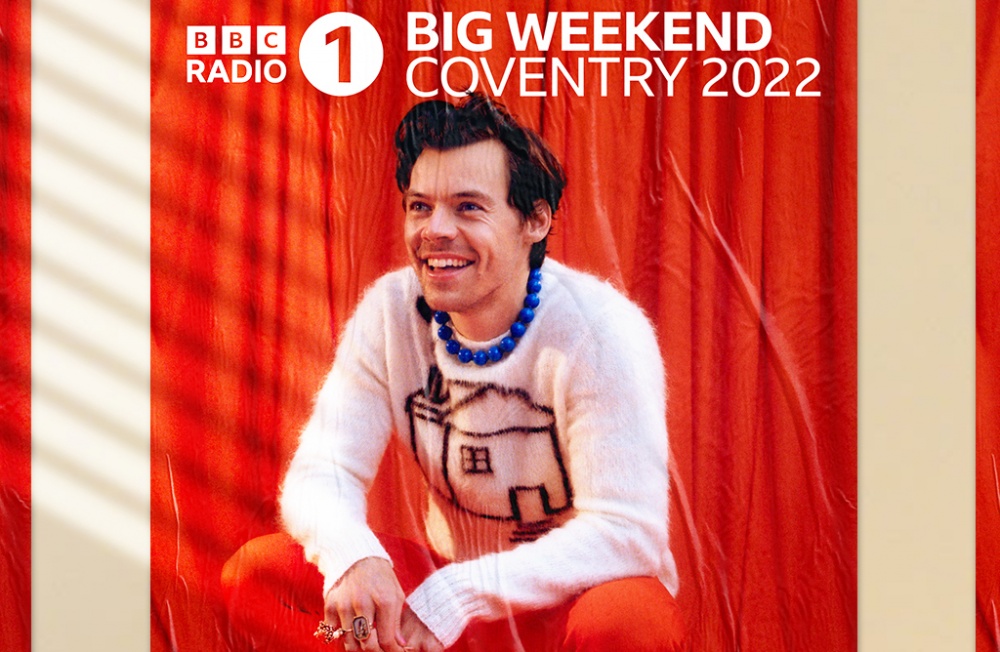 Harry Styles has been added to the line-up, headlining Radio 1’s Big Weekend 2022 in Coventry on Sunday 29 May, with Pa Salieu and Rina Sawayama also joining the star-studded line-up.

Radio 1’s flagship live music event will welcome an audience of 80,000 BBC Radio 1 fans to War Memorial Park from 27-29 May 2022 to watch some of the biggest acts on the planet take to the stage including Ed Sheeran, Charli XCX, KSI, Calvin Harris, George Ezra, Lorde, Jax Jones and Anne-Marie.

Coventry’s War Memorial Park will play host to Radio 1’s flagship live music event with over 80,000 Radio 1 fans expected to attend the three day festival which will take place from 27–29 May 2022.

Pa Salieu says: “Excited to be finally performing in my home town Coventry as part of Radio 1’s Big Weekend. I know the Coventry crowd will do our city proud and show all the other artists the energy of the Midlands.”

Rina Sawayama says: “I cannot WAIT to come and play at Radio 1’s Big Weekend for the first time!! It’s going to be such a moment.”

Music superstar Ed Sheeran said: “I can’t wait to kick off festival season and perform in front of a live audience at Radio 1’s Big Weekend 2022 in Coventry. See you all there!”

Griff said: “I can’t wait to scream Black Hole with everyone at Big Weekend!! Verrryyy excited, See you in Coventry.”

Performances from Radio 1’s Big Weekend will air on BBC Radio 1 across Friday, Saturday and Sunday and will be available to watch live and on demand on Radio 1’s BBC iPlayer channel and on BBC Sounds.

BBC One will also broadcast a highlights show as well as a special Harry Styles show – full details will be announced soon.

Aled Haydn Jones, Head of Radio 1 says: “We are kicking off the UK’s festival season in true Radio 1 style with an incredible line up of acts already on the bill, and more exciting names to be revealed this week. We can’t wait to bring our flagship live music event to Coventry for 2022.”

This year, the festival will return to the field for the first time in two years and will be part of the BBC’s Centenary celebrations.

It will also kick off the UK’s festival season, as well as taking artists to the cities that may not otherwise host a large scale event like Big Weekend, shining a light on the host city and providing a major boost to the local economy. The BBC is working closely with Coventry City Council to put on Radio 1’s Big Weekend 2022.

BBC Radio 1 will broadcast live from the festival site across the weekend, with performances and tracks available live and on demand across Radio 1’s iPlayer channel and BBC Sounds.

A small number of tickets have been held back for Harry Styles fans which will go on sale at 5pm today (Monday 25 April). For more information about the festival, visit: www.bbc.co.uk/backstage/bigweekend/.