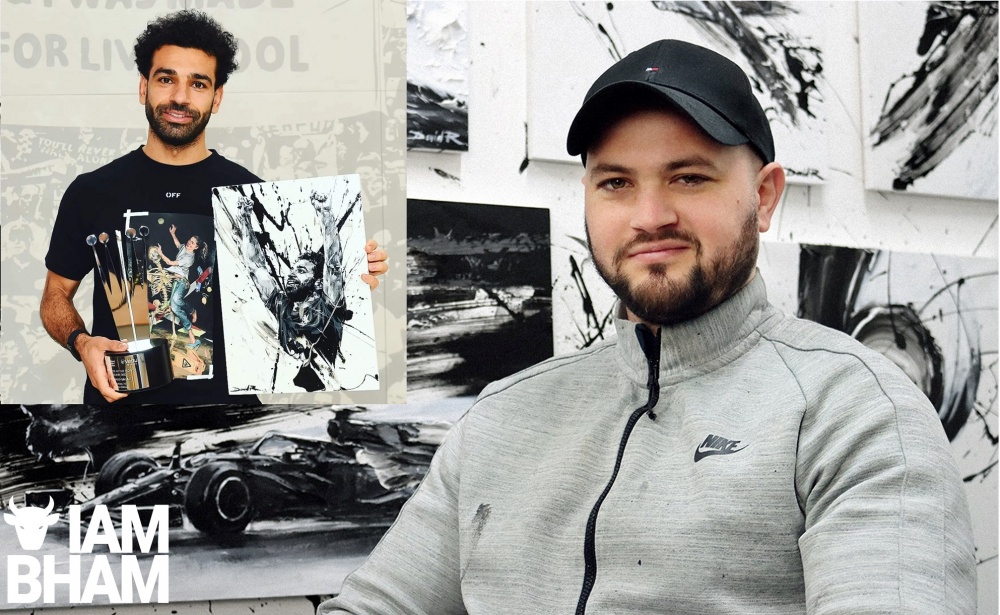 A Birmingham artist whose dynamic work is collected by the likes of legendary Liverpool footballer Mohamed Salah, is unveiling his first collection this month.

David Roman, 30, will be showcasing his experimental and compelling Icons of Extreme Sports collection on 11 May.

David Roman is a leading Romanian-British sports artist known for his heavily textured and energetic acrylic paintings of world-class athletes which pulsate like cinematic film stills frozen in time.

His material flows with intense emotional energy, with the artist capturing dynamic movement and rhythm which heightens the sense of a sporting moment literally frozen in time.

The artist uses a monochromatic palette which hearkens back to the golden era of sports photography which employed black-and-white film to capture the dramatic energy of sporting events. Roman takes that template and then infuses it with his own experimental and unique style of painting which blends a dreamlike quality of movement into the art.

The splashes of paint seem to ripple and move in his paintings, each droplet of black and white weaving an atmosphere fuelled by powerful emotion.

While Roman’s painted subjects may be figurative, each canvas is painted with dynamic, textured abstractions of power and strength.

Works by Roman have been collected by renowned athletes like Mohamed Salah, Trent Alexander Arnold and Aleksandar Mitrovic, as well as private collectors across the world, from New York to Dubai, London and Sydney.

Speaking to I Am Birmingham, Roman said: “I started painting athletes while studying Fine Art at Coventry University.

“I was fascinated with capturing the sense of movement with paint and over the years it evolved into creating artworks that celebrate career highlights of elite athletes.

“This is art for the champs. Through these paintings athletes’ greatest moments live on for generations to come.”

Roman enjoys painting a wide range of sports which includes rock climbing, surfing, boxing, snowboarding, formula one racing, and rally driving. The core element in each sport that he paints is the sense of a rush of “adrenaline”.

He said: “The feeling of high adrenaline is the common thread in all these sports, so I wanted to create the most dynamic and energetic paintings that truly capture that. I’m excited to step into the NFT world and share my art in a new format.”

The artist loves his home city of Birmingham and has a studio in the Southside.

“My studio is in the city centre just by the Chinese Quarter, where I’ve been painting for the past eight years,” he said.

Asked about which one of his works is his personal favourite Roman instantly selected a portrait of iconic Liverpool striker Mohamed Salah. Roman described the experience of painting it as “a labour of love” because Salah is one of his “heroes”.

Speaking about the unveiling of his new collection, Roman said: “Over the past year I’ve been learning more about Web3, NFTs and explored different options of how I wanted to expand my art practice into this new world. For my first NFT drop I decided to partner with GENIACE, a NFT marketplace for iconic collectibles.

“Together we decided the theme of the collection – extreme sports, and I chose eight iconic athletes, each representing a different sport. I then created paintings of each athlete capturing them at their best, in my heavily-textured black & white style.”

Roman also mentioned that each year he donates 10% of profits from his art to support the next generation of athletes through local charities.

The Icons of Extreme Sports collection will launch on 11 May exclusively on www.geniace.com.