Candle-lit vigil held in Birmingham for victims of London attacks 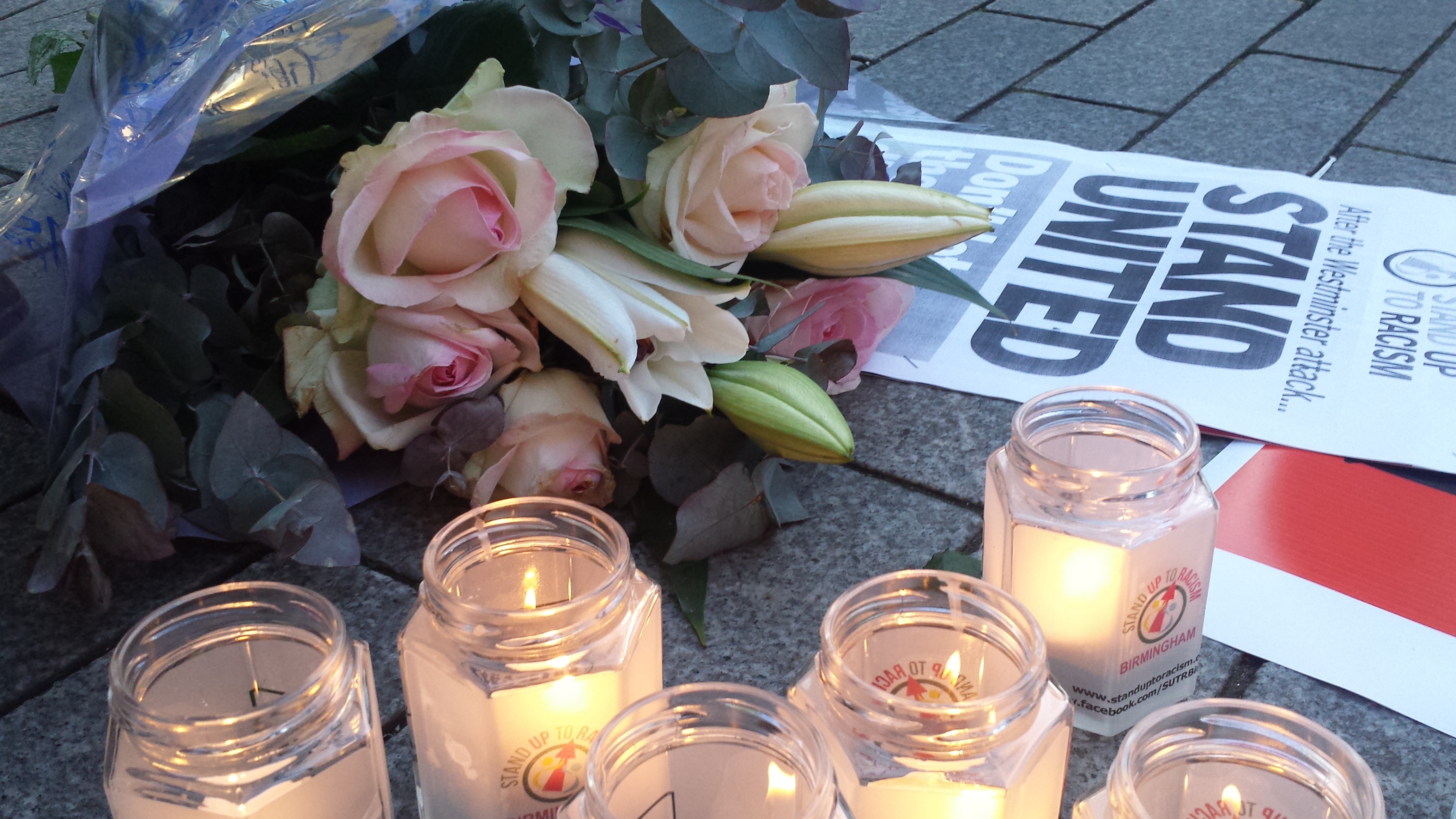 A vigil has been held in Birmingham this evening in response to the recent attacks in Westminster, which left 5 people dead and around 29 injured.

Following what Met Police described as “an act of terrorism” in the heart of London on Wednesday, a candle-lit peace vigil took place in the second city today to pay tribute to those affected by the tragedy.

Over a hundred people gathered in High Street in Birmingham city centre, outside Waterstones and the Bullring, at 5pm to pay their respects and share their grief and solidarity.

Organised by MEND (Muslim Engagement and Development) and Stand Up To Racism, attendees brought with them candles, flowers and messages of peace, as local community figures expressed their thoughts and feelings about the tragic events in the Capital.

Sharon Campion, from Stand Up To Racism Birmingham, said:

“We’re here just to show unity and solidarity really. People have lost their loved ones at Westminster.

“Last Saturday, there was a massive demonstration in London, 30,000 people, and we marched in the same spot where this happened, and we just don’t want this to be used to divide ordinary working class people.”

Since the incident in London, some national media outlets have suggested Birmingham is a “breeding ground” for terrorist activity.

Sharon Campion has dismissed this, insisting such media claims have been repeated before and been shown to be untrue.

“Birmingham has been targeted before in the media, it’s been a divided city and that definitely is not the case at all. In fact, it’s the complete opposite. it’s a completely united city. Muslims, black people white people all live and work together in harmony, and we don’t want this to be the cause of any division between anybody.”

Placards and posters promoting peace and unity were on display during the event, amongst them a placard which read: “After the Westminster attack, stand united, don’t let the racists divide us.”

“Today’s vigil was primarily about mourning and commemorating those who lost their lives in the tragic incident that took place in Westminster, so we lit candles, we had prayers extended to the loved ones of those affected.

“It’s awful what’s happened and as a community we’ve come together to say ‘not in our name’.”

A statement from the event organisers also added:

A large rally and vigil is set to take place tomorrow, on Saturday 25th March, in Victoria Square in Birmingham city centre, in front of the Council House. The event has been called by the city’s Muslim community and will start at around 1pm.

The event page for tomorrow’s vigil and rally can be found here.

(Visited 295 times, 1 visits today)
https://www.iambirmingham.co.uk/2017/03/24/candle-lit-vigil-held-in-birmingham-for-victims-of-london-attacks/https://www.iambirmingham.co.uk/wp-content/uploads/2017/03/20170324_182029-1024x576.jpghttps://www.iambirmingham.co.uk/wp-content/uploads/2017/03/20170324_182029-220x140.jpg2017-03-24T20:14:11+00:00Staff ReporterCommunityEventsFaithNewsPoliticsRacismBirmingham,Brum,Candle-Lit Vigil,London,London Attacks,MEND,Muslims,Peace,Salma Yaqoob,Sharon Campion,Stand Up To Racism,Terror,Terrorism,Unity,Victims,Vigil,WestminsterA vigil has been held in Birmingham this evening in response to the recent attacks in Westminster, which left 5 people dead and around 29 injured. Following what Met Police described as 'an act of terrorism' in the heart of London on Wednesday, a candle-lit peace vigil took place in the second city today to...Staff ReporterStaff Reporter[email protected]AdministratorI Am Birmingham
« Birmingham Muslims call anti-terrorism rally in response to London attack
POEM: “Birmingham” by Robert Punton »