OPINION | Rangzeb Hussain | “Go back home, Paki! This is England!” was my EDL welcome 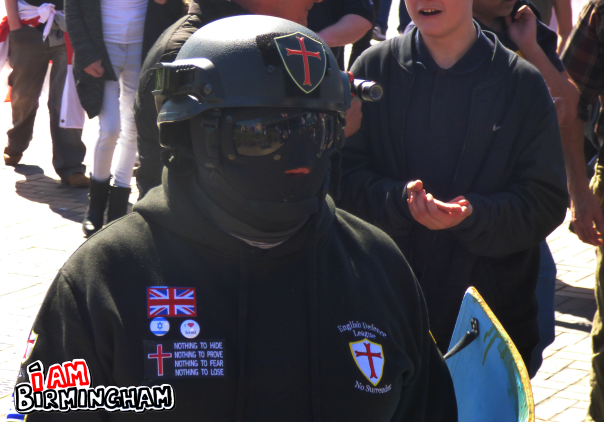 THUGS. That is what we are dealing with.

THUGS. Our world is being brutalized by the violence and ignorance of narrow-minded THUGS.

Today, in my home town, I experienced the hatred and intimidation of THUGS.

The English Defence League marched through Birmingham to cause division, to unleash fear, and to plant the seeds of suspicion and hatred against Muslims.

In their pamphlets, and in their speeches, the EDL proclaim that they are not a racist organisation. Their main agenda is to put Islam under a negative spotlight. Islam, and Islam alone is their true bone of contention. That’s what they scream about day and night.

The THUGS continue to chant over and over that they are not racist.

Well, I beg to differ.

And I have proof.

The proof is my experience, and that experience is the cold naked fear and aggression that I experienced at the hands of EDL members on a bright and beautiful day in my beloved city, right outside the Library of Birmingham.

I do not fit the stereotype of a Muslim. I have no beard, I wear no skull cap, and I don’t wear traditional Middle-Eastern or Asian clothes.

I am what you would describe as a ‘European styled’ gentleman, albeit with one major difference.

My skin is brown.

And that single fact was enough for me to be singled out and targeted by the EDL.

Two men, one in his mid-20’s and the other in his late 30’s, pushed me from behind as I photographed a young Muslim girl who had been surrounded by a large group of EDL men. They bristled with anger, teeth clenched, spittle and froth escaping from their mouths as they jabbed their fingers at the young girl.

The words that they hurled at the girl were scraped out of the gutter of racism. That little waif of a girl, with her blue headscarf, she bravely stood her ground and showed strength and resilience as the men converged on her.

She remained calm, collected, and resolute. Her gentle focus and fearlessness unnerved the snarling thugs and they stopped in their tracks. By now, a handful of Police Officers had moved in and made a line in front of the girl.

A larger group of Police Officers, who were stationed under the balcony of the library, standing in a fixed and regimented manner with their arms folded, witnessed the situation as it escalated but they remained frozen as if they were crafted out of granite.

Behind me, the two men who had accosted me, turned back to face me head on, their eyes glazed with hatred, and then in full view of the Police officers, one of the EDL men put his index finger under his left ear and then slowly traced a line over his neck, ‘slicing’ across to the right ear, making the motion of a knife cutting through the neck. His eyes flashed a rage I have never seen before in a human being. It was a rage based on an infernal fire, deep and vicious.

And then he charged at me.

The weight of his shoulder, as he barged into me, felt like an iron bar thundering through my left shoulder. A female Police officer finally detached herself from the long line of officers she was standing with, and she came between me and the two EDL members who were turning around again and once more making the motion of a knife cutting through the neck.

She saw the attack, she saw the slicing gesture over the neck, and she heard the words being screamed at me by the older EDL member, “Go back home, Paki! This is England!”

The Police officer turned to me, grabbed hold of my shoulders and forearm and pushed me away. “Move along!”

In a free country, in a city that I love, outside a library where literature and culture live, I was asked to depart.

The words dried up in my throat, my lips ached, and my legs felt heavy.

I walked away and left behind the screams, the jabbing fingers, and the hate filled eyes of the crowd.

On my way back towards Victoria Square I saw a sight that reaffirmed my belief in a shared humanity. I saw people of all races standing under blue skies with the sun streaming down hope, and on the air I heard songs and poems of love and unity from the performers who had come to share their art with the people of Birmingham.

And then, as I turned down a side street to ask a Police Officer about which bus would take me to the Central Mosque in Highgate, he replied that he had no idea because he had been brought in from the Warwickshire division to deal with any complications from the EDL march.

He slid back the doors of a riot van, and there was a whole team of officers inside wiping away the sweat from their brows. These officers were a credit to the Police force. Polite, helpful, warm, and reassuring.

I finally got to the Central Mosque in Highgate and was greeted by a sublime sight. Under the glittering light of the new Spring sun, I saw the Union Jack fluttering in the wind, the bunting bounced as the wind cascaded over the mini flags, and the white dome of the mosque seemed to shimmer like a mirage.

The mosque took pride in hosting a Tea Party, open to all, to celebrate the spirit of community, humanity, and unity.

That’s the country I love, that’s my city, that’s my England. A nation that embraces diversity and beauty, and at the heart of my nation is a hope that our children will walk together in peace.

(Visited 1,238 times, 1 visits today)
https://www.iambirmingham.co.uk/2017/04/10/opinion-rangzeb-hussain-go-back-home-paki-this-is-england-was-my-edl-welcome/https://www.iambirmingham.co.uk/wp-content/uploads/2017/04/edl-in-birmingham-1.pnghttps://www.iambirmingham.co.uk/wp-content/uploads/2017/04/edl-in-birmingham-1-220x140.png2017-05-04T17:49:22+00:00Staff ReporterBlogColumnNewsPoliticsRacismBirmingham,Birmingham Central Mosque,demonstration,EDL,English Defence League,far-right,Islam,Muslims,Opinion,Racism,Racist,Rally,Rangzeb Hussain,thugsTHUGS. That is what we are dealing with. THUGS. Our world is being brutalized by the violence and ignorance of narrow-minded THUGS. Today, in my home town, I experienced the hatred and intimidation of THUGS. The English Defence League marched through Birmingham to cause division, to unleash fear, and to plant the seeds...Staff ReporterStaff Reporter[email protected]AdministratorI Am Birmingham
« YouTubers Syndicate, Yogscast and MumboJumbo join Birmingham Insomnia60 line-up
Malala Yousafzai becomes youngest UN Messenger of Peace »