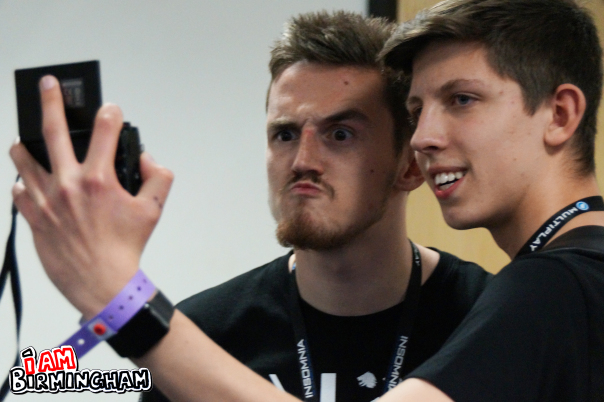 YouTube and Twitch star Syndicate poses with a fan at Insomnia 57 in Birmingham (Photograph: Adam Yosef)

Insomnia60, the UK’s largest gaming festival, which runs over the Easter bank holiday weekend, will see the most star-studded lineup in its 17-year history grace the stage at the NEC in Birmingham, as YouTube superstars Syndicate, Yogscast and MumboJumbo, with a combined fanbase of nearly 20 million people, will be meeting fans and enjoying the countless gaming features and events on offer.

This follows the news that on the Saturday evening there will be music from Years and Years, Chase & Status, Wretch 32, Disciples and Jaguar Skills. These new music acts add to Insomnia60’s status as a truly fantastic day and evening out for the whole family.

For the first time, the festival will also host an orchestral concert –The Legend of Zelda: Symphony of the Goddesses will feature a full symphony orchestra performing over 30 years of music from The Legend of Zelda franchise as never before a perfect event for families and fans alike.

Coming just a month after the launch of the biggest-selling Nintendo launch title ever in Europe – The Legend of Zelda: Breath of the Wild, for Nintendo Switch and Wii U the concert coincides with the brand new Nintendo Zone at Insomnia.

Some of the biggest titles for the new Nintendo Switch will be playable throughout the duration of the show at the Nintendo Zone, including ARMS, Splatoon 2, Mario Kart 8 Deluxe and one of the most critically acclaimed games of all time, The Legend of Zelda: Breath of the Wild.

The Nintendo zone will also have its own Stage featuring daily tournaments, Nintendo competition giveaways and exciting gameplay sessions . Each day of the show will host a unique schedule.

Alongside all this will be the Insomnia Expo Hall, open for fans and families to ‘discover, try and buy’ all that is new from the gaming world – from cool accessories to innovative new hardware. A series of specialised zoned areas will also feature at the event, including; VR, Turn Up and Play, Tabletop, Retro, Indie, in the Rock zone you will see the vinyl village, rock art and making music features and general retail.

“Insomnia60 will be the biggest and best yet, with some of the most exciting YouTube stars joining our major music acts to produce a stellar overall lineup.

“We’re always looking at ways to build on previous years’ successes in order to deliver an even better gaming experience to our legions of fans – world-class live music, exhilarating esports tournaments and top YouTube talent should prove to be the perfect combination.”

For tickets and more information on Insomnia60, please visit: www.insomniagamingfestival.com

(Visited 568 times, 1 visits today)
https://www.iambirmingham.co.uk/2017/04/09/youtubers-syndicate-yogscast-and-mumbojumbo-join-birmingham-insomnia60-line-up/https://www.iambirmingham.co.uk/wp-content/uploads/2017/04/dsc06682b.jpghttps://www.iambirmingham.co.uk/wp-content/uploads/2017/04/dsc06682b-220x140.jpg2017-04-09T13:30:58+00:00Staff ReporterEventsNewsWhat's OnBirmingham,Chase & Status,Festival,Gaming,i60,Insomnia 60,Insomnia60,Jaguar SKills,NEC,Rock Zone,Syndicate,Wretch 32,Years and Years,Yogcast,YouTubeInsomnia60, the UK’s largest gaming festival, which runs over the Easter bank holiday weekend, will see the most star-studded lineup in its 17-year history grace the stage at the NEC in Birmingham, as YouTube superstars Syndicate, Yogscast and MumboJumbo, with a combined fanbase of nearly 20 million people, will...Staff ReporterStaff Reporter[email protected]AdministratorI Am Birmingham
« Birmingham mosque responds to EDL with “Best of British” tea party
OPINION | Rangzeb Hussain | “Go back home, Paki! This is England!” was my EDL welcome »