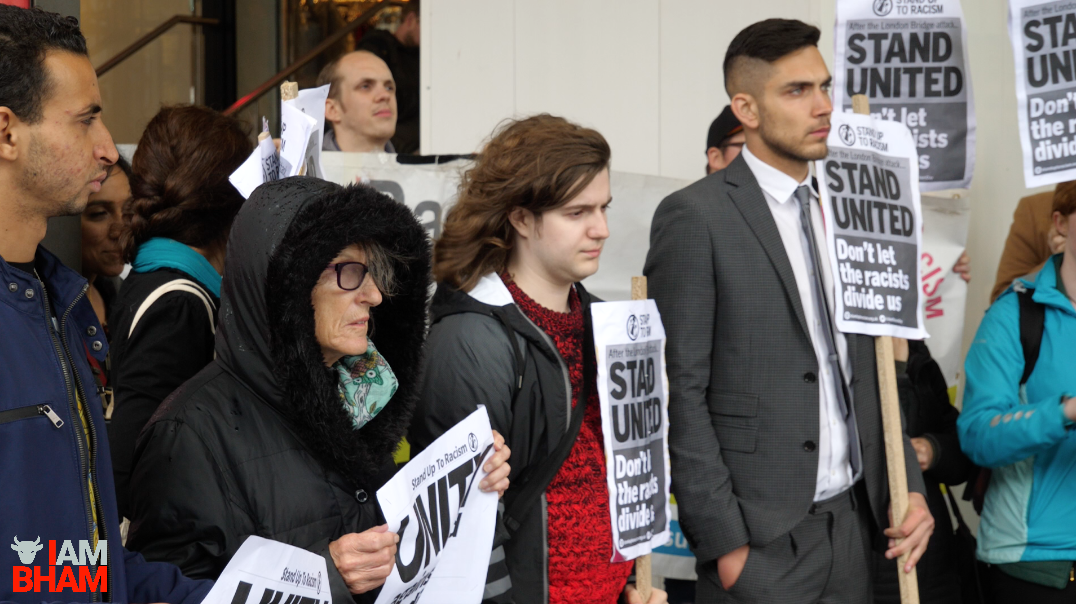 A vigil has been held in Birmingham city centre in tribute to the 7 people who lost their lives during the London Bridge terror attack on Saturday.

Placards bearing messages of unity were held at the gathering in High Street outside the Bullring, as speakers reflected on the weekend’s tragic events.

A minutes silence was observed at 5.30pm, ahead of speeches from community representatives.

Despite wet and windy weather conditions, organisers lit candles as attendees laid flowers in memory of the victims of the London attack.

Leading the speeches, Bridget Parsons from Stand Up To Racism commented:

“We’re here today to show our solidarity and sympathy with the victims, and their families, of the tragic evens in London. I think it’s really important we stood together as a community after the attacks in Westminster and Manchester, and we’re standing together now to show our solidarity and our sympathy and our love for their families and friends.

“We will not let these terrible acts divide us. We will not let racism be stoked up and be used to scapegoat any part of our community. It’s important we stand together against that.”

Touching on both the recent terror attacks in Manchester and London, Moseley and Kings Heath councillor Lisa Trickett said:

Organised by Stand Up To Racism and Muslim Engagement and Development (MEND), the vigil remembered the victims of the London Bridge attack – which left 7 dead and 21 critically wounded -and encouraged solidarity to prevent community divisions.

This was the second time in less than a fortnight that a peace vigil took place in the city following an act of terror on British soil. Last month, hundreds gathered in Victoria Square after a terror attack in Manchester left 22 dead, the youngest only eight years old.

Seven people were killed in central London over the weekend when three attackers drove a van into pedestrians on London Bridge and launched a knife attack in Borough Market. Police have declared it a terrorist incident.

The three suspected attackers were shot dead by police within eight minutes of the first call. The eight armed officers fired an “unprecedented” 50 shots at the attackers, who were wearing fake suicide vests. A member of the public was also shot during the operation and was taken to hospital for treatment.

Doug Morgan from the National Union of Teachers (NUT) said young Muslim children in schools had to be protected from Islamophobia in the wake of terror incidents, while Mona el-Shazly said the terrorists weren’t “true Muslims” as they should have been performing evening Ramadan prayers in mosque rather than killing innocent people on the streets of London.

“First of all I’d like to begin by saying how devastated I am that we all have to be here again. It hasn’t even been a fortnight since this city came together for the previous vigil in Victoria Square, and a little over a week since the minutes silence at Birmingham Pride .

“Every single Muslim – as with any other human being I have ever met – is a unique individual with their own personal views and morals, and it proves that you cannot stereotype an entire group of people based on the actions of a few.

“  I’m proud to be part of such a diverse community in Birmingham and I’m proud to be working with some of the organisations speaking today who are building bridges between communities, and I urge you, if you have time, please consider checking out and maybe even donating to some of the causes you have seen speak today. It’s nice to know that in what seems like a world of homophobes, racists and assorted bigots, there are people out there trying to bring communities closer together and not push them further apart.”

Student Jennifer Maidment in studying in Birmingham but is originally from London. She expressed her grief at the news coming from her home city. Reading from a postcard she wrote and chose to leave with candles and flowers at the vigil, she stated:

“As a Londoner in Brum right now, I feel very far from home, but the spirit of London is in me. We will always be multicultural, brave and progressive. No extremists can take that from us. I’m a Londoner now, and forever, and we have never been stronger. Love from one of your many daughters.”

(Visited 618 times, 1 visits today)
https://www.iambirmingham.co.uk/2017/06/05/calls-defend-citys-muslim-community-vigil-london-terror-victims/https://www.iambirmingham.co.uk/wp-content/uploads/2017/06/Screen-Shot-2017-06-05-at-19.22.01-1024x575.pnghttps://www.iambirmingham.co.uk/wp-content/uploads/2017/06/Screen-Shot-2017-06-05-at-19.22.01-220x140.png2017-06-05T19:34:32+00:00Staff ReporterCommunityEventsFaithNewsRacismAndrew Stelly,Birmingham,Bridget Parsons,Candles,Doug Morgan,Harvey McDonald,Lisa Trickett,London Attacks,London Bridge,London Terror Attack,Peace,Racism,Stand Up To Racism,Terror Attack,Tribute,Unity,VigilA vigil has been held in Birmingham city centre in tribute to the 7 people who lost their lives during the London Bridge terror attack on Saturday. Placards bearing messages of unity were held at the gathering in High Street outside the Bullring, as speakers reflected on the weekend's tragic...Staff ReporterStaff Reporter[email protected]AdministratorI Am Birmingham
« Vigil for London attack victims to be held in Birmingham
Corbyn gives passionate cry for change to thousands of supporters in Birmingham »