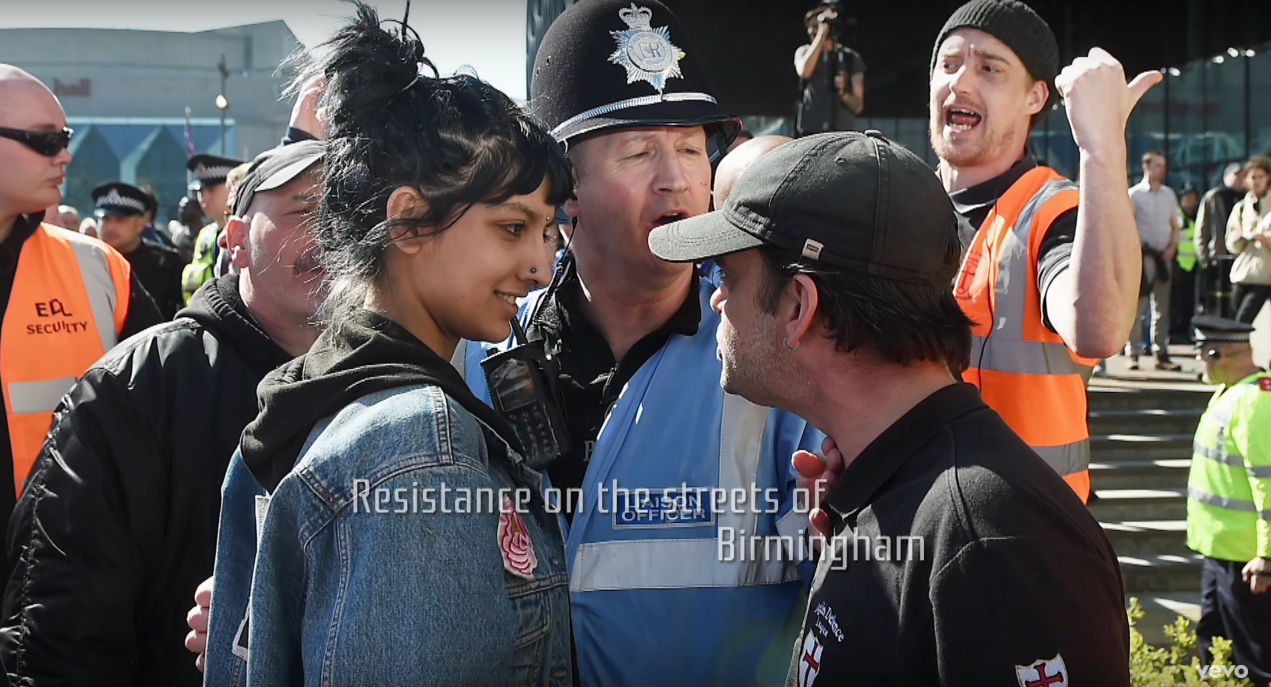 In what has since become an internationally iconic photograph, young activist Khan was snapped staring down an English Defence League ruffian during a demonstration in Birmingham city centre in April, and the photo quickly went viral.

Who looks like they have power here, the real Brummy on the left or the EDL who migrated for the day to our city and failed to assimilate pic.twitter.com/bu96ALQsOL

The stark contrast between the angry hate-filled far-right figure – against the composed and smiling Saffiyah – made the image an instant hit across the world.

Inspired by her actions, 59-year-old musician Billy Bragg has penned song ‘Saffiyah Smiles’, as part of new material being released by the ‘Bard of Barking’ this year.

Discussing his reasons for writing the song, he said:

“Following the shocking scenes of white supremacists marching through the streets of Charlottesville this past summer, my mind went back to an image of a young woman facing down a ranting fascist with nothing but a serene smile.

“Saffiyah Khan had been taking part in a counter demonstration against the neo-fascist English Defence League in Birmingham, England, in April this year when she saw a woman being surrounded by taunting EDL supporters. Saira Zafar had been verbally opposing the racists and a number of them had left the demo to turn on her.

“When the police struggled to protect her, Saffiyah stepped up and got in the face of the loudest aggressor, holding him at bay with nothing more than a smile until police intervened.”

“A press photographer captured the moment and the picture went viral. Local Labour MP Jess Phillips memorably tweeted the image with the caption ‘Who looks like they have the power here?’

“Saffiyah Khan’s selfless act of solidarity is an inspiration to us all and a reminder that sometimes you can confront hatred by calmly making plain how ridiculous its propagators are.”

Following Birmingham-born Saffiyah’s act of bravery, she immediately became an international icon, with her image being featured in news stories across the world. The famous Press Association photograph of her, taken by Joe Giddens, has been reproduced and interpreted by international artists including Jordi Calvís i Burgués, Inès’ Art, Christina Tsevis, Arkaitz González, Samira Idroos and Dan Simmonds; whose works are included in Billy Bragg’s new music video.

Saffiyah Khan has since continued to pursue her social and political activism, supporting and speaking at events with Labour leader Jeremy Corbyn, appearing on TV shows including The Last Leg, and recently hosting a photo exhibition in her home city.

Sharing her thoughts on Bragg’s new musical number, Saffiyah told I Am Birmingham:

“It’s great, it’s really special to me that such a talented artist has featured me in a song. I’ve got a lot of respect for him and his work, and I can’t wait to meet him and see him live for the first time in November.”

.
Who else is featured in the video?

As tens of thousands of people protested following the police shooting deaths of Philando Castile and Alton Sterling, this photograph of Iesha L. Evans facing off riot police on July 9, 2016, emerged from Baton Rouge, Louisiana, as a symbol of the civil unrest that has spread across the United States.

The image, titled ‘Taking a Stand in Baton Rouge’ and taken by Jonathan Bachman for Reuters, shows qualified nurse and mother Iesha standing in a long dress in the face of a line of Louisiana state troopers dressed in riot gear outside of police headquarters. Evans looks calm and poised and almost seems to repel the two officers who are charging towards her.

The lone protest of a woman defying a march of 300 uniformed neo-Nazis on May 1, 2016, became an iconic image of resistance to the rise of the far-right in Scandinavia.

A photograph of Tess Asplund, 42, with her fist raised against the leadership of the Nordic Resistance Movement (NRM) in Borlänge, central Sweden, went viral last year.

“It was an impulse. I was so angry, I just went out into the street,” Asplund told the Guardian. “I was thinking: hell no, they can’t march here! I had this adrenaline. No Nazi is going to march here, it’s not okay.”

A photo of a Girl Scout calmly confronting a far-right protester during a rally in the Czech Republic earlier this year was shared thousands of times as a powerful symbol of peaceful defiance in the face of hate.

The image, of teenager Lucie Myslikova taking on an angry demonstrator during a May Day rally, was shared by the World Organisation of the Scout Movement, immediately going viral as the 16-year-old squaring up to thug received praise for her courage and composure during the confrontation.

The Girl Scout group said: “People from all walks of life, and Scouts among them, came to the streets during an extreme right march yesterday, to express their support for values of diversity, peace and understanding. Creating a better world!”

Lara Rogers was driving to work in August this year, when she saw Allen Armentrouth’s flag amongst a crowd gathered around the Confederate Robert E. Lee statue in Emancipation Park, just a few days after white supremacists had marched on her home city of Charlottesville under the same banner, and murdered innocent protester Heather Heyer.

Rogers pulled over and confronted Armentrouth, whose great-great-great-great grandfather was a Confederate soldier. Allen Armentrout continued to display his Confederate flag, while carrying a rifle and donning a imitation 19th century uniform. Lara’s response was to give the guy a middle-finger salute of her own, an image that went viral as international condemnation of US white supremacists was amplified.

“The Confederate flag kind of throws up a whole lot of traumatic imagery very quickly,” Rogers told The Washington Post at the time.