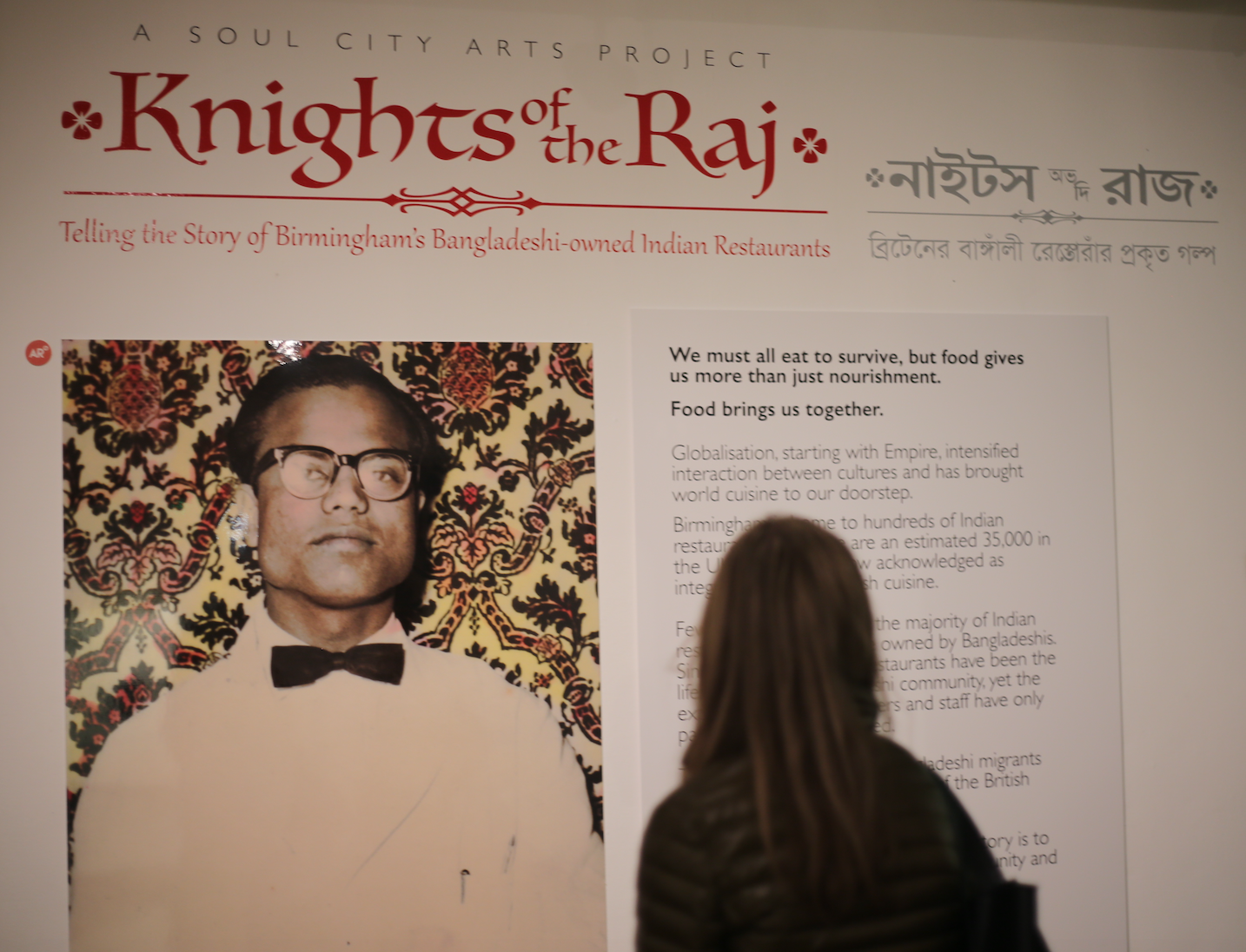 The Knights of the Raj exhibition at the Birmingham Museum and Art Gallery reveals the untold stories behind the legacy of Britain’s Bangladeshi-owned Indian restaurants.

Unbeknown to the masses, the Bangladeshi community has provided the backbone for the momentous expansion of curry houses in the UK. The rise of the curry has led to it being firmly integrated within contemporary UK culture. However, the lives and stories of the thousands of workers from the South-Asian diaspora is relatively less well-known.

Soul City Arts, working in partnership with Future Seed CIC, have captured the untold stories of those pioneers, tracing the origins of the Birmingham curry trade.

It is intriguing to experience the multi-faceted, deep narratives that the exhibition reveals gradually to the visitor. Who knew that the inclusion of curries in Birmingham restaurants stretches back to the late 1940s?

Overall, the knowledge disseminated is very comprehensive – it leaves no stone unturned. For example, it charts the history behind the migration of the Bangladeshi diaspora, the birth of the British curry and includes numerous anecdotes and artefacts to add to the depiction of life in the curry houses.

There is a clear focus to unveil the history using a wide-range of media and interactive resources to engage and enhance the visitor’s experience. From the use of listening posts, the sights and sounds of a bustling restaurant kitchen, to a ‘touch table’ interactive photo album screens and the inclusion of a Birmingham Museum and Gallery first – ‘augmented reality’ technology.

The technology allows pictures and symbols to ‘come to life’ and allow a kind of virtual reality where the user can watch and listen to videos through an app by simply pointing their device at a picture or symbol used in the exhibition.

The user enters a new exclusive experience that others may not see. The clips give a greater understanding through interviews and videos recorded at different locations which detail the history and facts behind the most famous of the restaurants and ‘Knights’.

One of the most interesting insights discovered is the revelation of Roger Gwynn the ‘Honorary Bengali’, otherwise known as ‘Roger Master’ to the Bangladeshi community, a title which is normally used for Bangladeshi elders.

It was captivating to learn about how a man of British heritage became so fascinated with the Birmingham Bangladeshi restaurant community and even learnt the Bangladeshi fluently. His interview given in both English and Bengali is certainly one not to be missed.

The extensive sourcing of artefacts and even wallpaper from one of the most nostalgic restaurants provide an authentic backdrop and aura to the exhibit. The visitor is left with the knowledge of some of the hardships faced by restaurants such as drunken ‘rough customers’ and can even listen to the secrets of the tandoori recipe.

Ultimately, the untold stories of the South-Asian UK diaspora and amalgamation with UK society is important, particularly for current and future generations to understand the beginnings of multiculturalism.

Communities which worked hard to prosper and left their motherland behind to successfully add their creative influence and culture to the British way of life.

The exhibition is running until the 7th January at the Birmingham Museum and Art Gallery. You can find out more here.