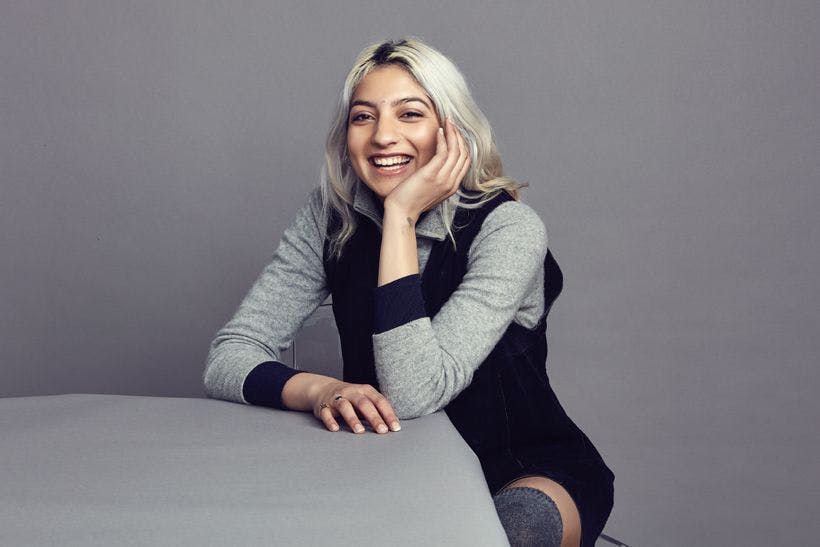 Birmingham activist Saffiyah Khan, who was propelled to international recognition after standing up to an EDL thug earlier this year, has been named of one of Stylist magazine’s Women of the Year.

The 20-year-old protester has been included in a list of ten specially selected women of “courage and determination” who have had a positive impact on British life during difficult times this past year.

In what has since become an internationally iconic photograph, young activist Khan was snapped staring down an English Defence League ruffian during a demonstration in Birmingham city centre in April, and the photo quickly went viral.

Who looks like they have power here, the real Brummy on the left or the EDL who migrated for the day to our city and failed to assimilate pic.twitter.com/bu96ALQsOL

The stark contrast between the angry hate-filled far-right figure – against the composed and smiling Saffiyah – made the image an instant hit across the world.

Following Birmingham-born Saffiyah’s act of bravery, she immediately became an international icon, with her image being featured in news stories across the world. The famous Press Association photograph of her, captured by Joe Giddens, has been reproduced and interpreted by artists across the globe.

Saffiyah Khan has since continued to pursue her social and political activism, supporting and speaking at events with Labour leader Jeremy Corbyn, appearing on TV shows including The Last Leg, while recently hosting a photo exhibition in her home city, trying her hand at modelling, and attending social justice Q&A events.

Such was the impact of her documented anti-racism stance, music artist Billy Bragg wrote and featured the song ‘Saffiyah Smiles‘ on his new album, in tribute to Khan.

For the last issue of 2017, Stylist photographed and interviewed 10 heroic women – such as Grenfell firefighter Louisa De Silvo – to celebrate the year’s incredible moments of compassion, courage and resilience… 📸: @mark_harrison_photography . . . #heroes #celebrate #women #2017

“We chose people who we thought had shown extraordinary courage and determination. These are not everyday people – they’re incredible. But I hope it will show our readers that they can be incredible too. We all have so much potential.”

“It is hard to reflect on 2017 without focussing on some of the toughest challenges we’ve faced in the UK, and it would be easy to get lost in this sadness and fear.

“But for me, the most amazing thing about these stories, were those of hope. It’s reassuring to know that our world isn’t broken because the majority of people are good, kind, selfless and generous – especially when put to the ultimate test.

“So in true Stylist fashion we wanted to celebrate those women who had made their mark on our year with acts of true courage and bravery, and who offer hope that we can still come together and create a world we can be proud of.”

You can read Saffiyah Khan’s interview here; and check out the full list of Stylist’s Women of the Year, complete with photographs and interviews, right here.

(Visited 3,784 times, 1 visits today)
https://www.iambirmingham.co.uk/2017/12/21/birmingham-protester-saffiyah-khan-makes-stylists-women-year/https://www.iambirmingham.co.uk/wp-content/uploads/2017/12/Stylist-Women-Year-2017-Saffiyah-Khan-photo-Mark-Harrison.jpghttps://www.iambirmingham.co.uk/wp-content/uploads/2017/12/Stylist-Women-Year-2017-Saffiyah-Khan-photo-Mark-Harrison-220x140.jpg2017-12-21T20:03:17+00:00Staff ReporterMediaNewsPoliticsRacismWomxn2017,activism,Activist,Anti-Racism,Birmingham,EDL,Khan,Politics,protester,Racism,Saffiyah,Saffiyah Khan,Stylist,Stylist magazine,Woman,Women,Women fo the Year 2017,Women of the YearBirmingham activist Saffiyah Khan, who was propelled to international recognition after standing up to an EDL thug earlier this year, has been named of one of Stylist magazine's Women of the Year. The 20-year-old protester has been included in a list of ten specially selected women of 'courage and determination' who...Staff ReporterStaff Reporter[email protected]AdministratorI Am Birmingham
« Birmingham wins bid to host 2022 Commonwealth Games!
Poundland’s over-sexed Christmas Elf on the Shelf goes rogue on Twitter [NSFW] »