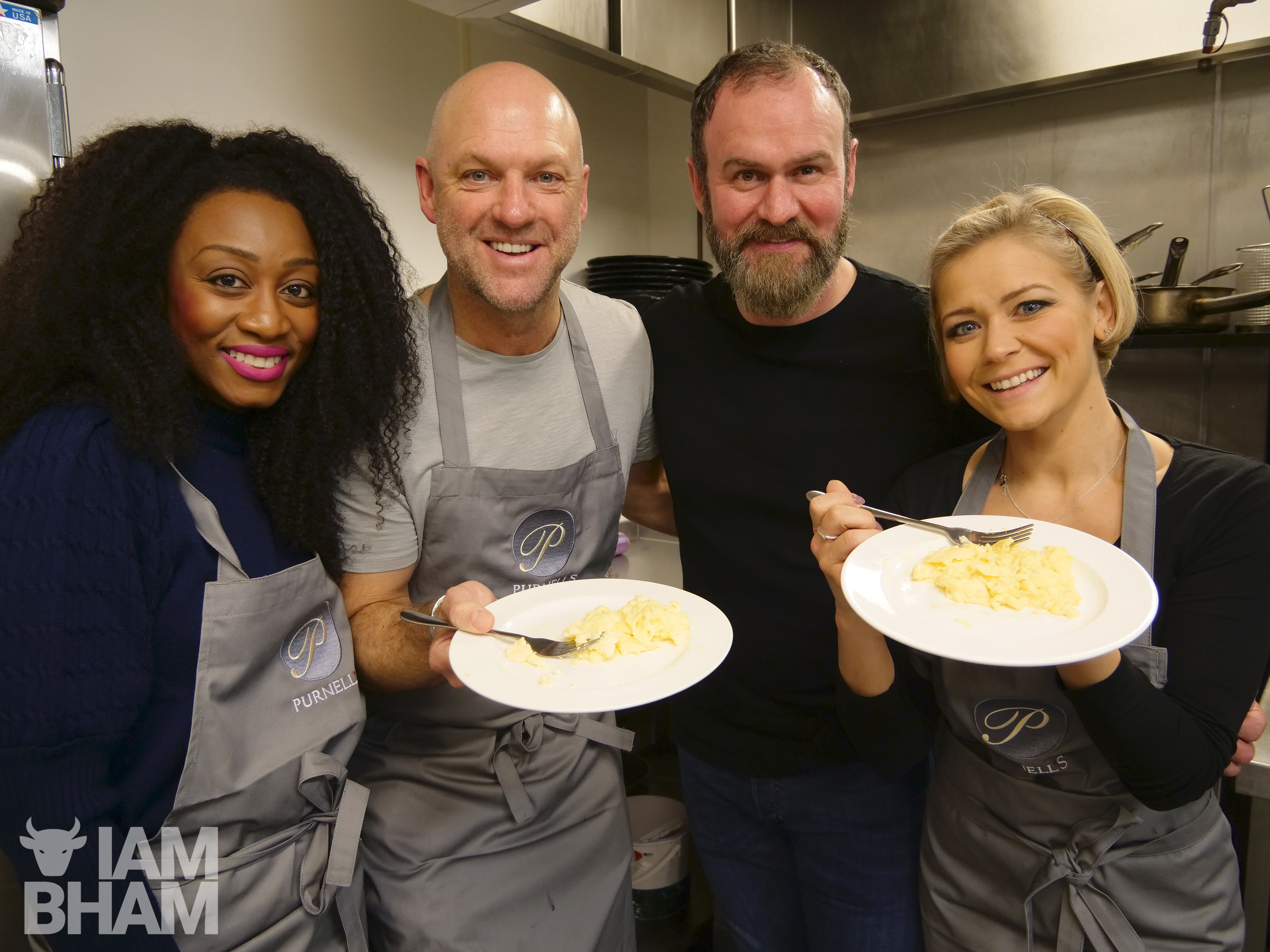 Yummy Brummy celebrity chef Glynn Purnell was armed with his eggs, and he wasn’t ‘yolking’ around when it came to handing them to Beverley Knight, Suzanne Shaw and Matt Slack, and hand them he did, on a plate… eventually.

The Birmingham panto stars were flippin’ eggs-static after agreeing to Purnell’s totally random omelette challenge, as they scrambled to prove themselves to the local Michelin-starred chef, but did they poach the top prize, did they crack under the pressure, or were they left with egg on their faces?

Bad puns aside (Yes, this really isn’t an episode of The Weakest Link), the popular culinary expert joined the all-singing and all-dancing trio at the Birmingham Hippodrome yesterday with a special panto-themed ‘Omelette challenge’, ahead of his visit later in the week to see their performance of Cinderella.

While at the theatre to meet cast and staff of the production, Glynn set comedian Matt Slack and former Hear’Say band member Suzanne Shaw a food-based test to whip up the best omelette they could, but it was a race against the clock.

Wolverhampton soul queen Beverley Knight had the unenviable task of having to judge the efforts of her Panto co-stars and, in the end, most agreed Suzanne was indeed the winner. Glynn had other thoughts:

“We put them through their paces, we had fun, it was enthusiastic, it was chaotic and produced two awful omelettes.

“Beverley, she didn’t want to cook… so I said ‘You can be in charge Beverley’, and then she decided who won and she went with Suzanne, so Suzanne Shaw is now the 2018 Hippodrome Omelette Challenge Champion!”

Entertainers Beverley, Matt and Suzanne have been in residence at the Hippodrome since December 16, appearing in festive pantomime Cinderella.

Christmas may be over for another year but the holiday fun continues at Birmingham Hippodrome in the fairy godmother of all pantomimes, which also features Danny Mac, ‘Ugly Sisters’ Ceri Dupree and David Dale and comedy duo The Grumblweeds.

“It’s like one of the best days of my life, I didn’t expect to get to keep [shows off a Purnell’s apron]… I’m gonna actually lie to people who come to see me at my house and say I’m his sous chef.”

Produced by Olivier-nominated pantomime producer Qdos Entertainment, Cinderella features all the ingredients of the perfect Hippodrome pantomime: a fabulous cast and orchestra, laugh-out-loud comedy, stunning scenery and special effects, beautiful costumes and plenty of boos and hisses for all the family to enjoy.