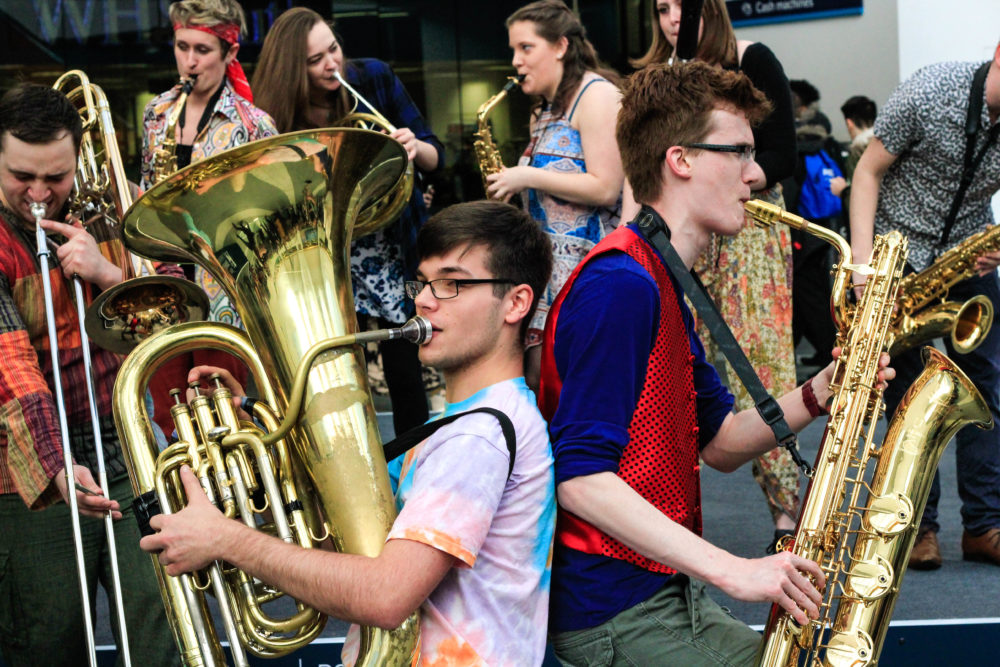 Rail commuters and shoppers stopped in their tracks as a musical extravaganza was laid on by the Royal Birmingham Conservatoire’s Folk Ensemble at Birmingham New Street station (Photo: Sophie Hawkesford)

Rail commuters and shoppers stopped in their tracks this morning as a musical extravaganza was laid on by the Royal Birmingham Conservatoire’s Folk Ensemble at Birmingham New Street station.

The Conservatoire Folk Ensemble of a stage-challenging 65 members all performed under the interchange’s main departure boards within the station’s domed atrium throughout the day, entertaining with a unique series of free concerts for commuters to enjoy.

The musical showcase was organised to coincide with the Royal Birmingham Conservatoire’s Music Open Day, which welcomed prospective undergraduate and postgraduate students to its new home, just a short walk from the station in the Eastside region of the Midlands city.

“From Johann Strauss to Duke Ellington to Kylie Minogue, the railways have inspired musicians over the last 200 years and The Conservatoire Folk Ensemble have continued that tradition as they raised the roof of New Street station with their infectious energy and impressive musicality.

We welcomed hundreds of visitors to our Music Open Day and many of those arrived by train at Birmingham New Street station. The performances by The Conservatoire Folk Ensemble provided a unique gateway to their wider visit and, for the thousands of other commuters, shoppers and residents who use the station daily, it showcased Birmingham as a culturally rich destination of international significance.”

The event was arranged in partnership with Network Rail, who also helped the Conservatoire’s parent institution, Birmingham City University, stage an ambitious fashion show in the station last year, where Fashion Design graduates showcased their latest collections along a specially-made runway.

Following a major redevelopment which opened in September 2015, Birmingham New Street station has been transformed into a major transport and shopping hub. Welcoming 140,000 passengers daily, its new concourse is now three and a half times bigger than before. This space is enclosed by a giant glass-roofed atrium, allowing natural light to brighten the entire area, including all 12 refurbished platforms.

The station also contains Parkside Platform, an exhibition space run by Birmingham City University and an addition to its Parkside Gallery which is located at its City Centre Campus in the Eastside of the city.

Its current exhibition ‘Archived’ is the result of a collaboration between the Historical Instrument Collection (HIC) at the Royal Birmingham Conservatoire and the artistic responses of the University’s Photography BA (Hons) students.

The Conservatoire Folk Ensemble was formed by fiddle player and arranger Joe Broughton in 1997. He said:

“The city of Birmingham is integral to the kind of folk music we make; noisy, full of energy and draws on the great breadth of music that Birmingham is famous for. To play in the rather unusual setting of the train station, right at the heart of the city, was really exciting and the reaction of commuters and prospective students as they are greeted by 65 musicians giving it their all was one I will never forget!

The Conservatoire Folk Ensemble thrives on this multi-cultural city that we live in and our music is an all-inclusive, positive and raucous take on folk music from across Europe and beyond. Just as people can expect to be impressed with the regeneration of Birmingham and our state-of-the-art new Conservatoire building, we in the Folk Ensemble are constantly redefining what folk music should be and what boundaries we can push to give our audiences the most uplifting and memorable performances.”

Celebrating their 20th anniversary in 2017, The Conservatoire Folk Ensemble embarked on a series of headline dates across the country and also found time to record and release their debut full length studio album, ‘Painted’ (SAE Records).

Run on an elective basis, The Conservatoire Folk Ensemble has become an enviable addition to the Royal Birmingham Conservatoire’s range of performing ensembles.

Additionally, as the first purpose built conservatoire in the UK since 1987, the new institution which opened in September last year is the only one of its kind in the country designed for the demands of the digital age.