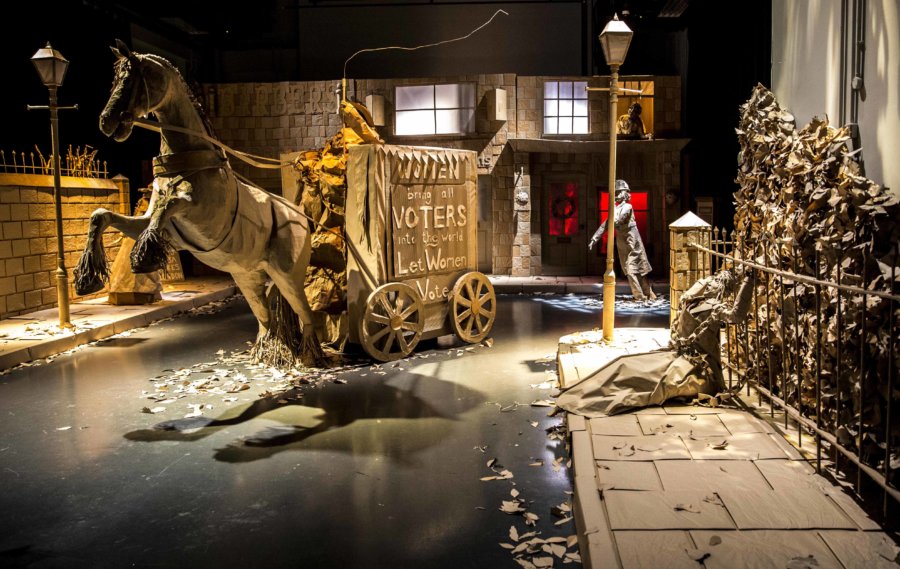 Trailblazing women who successfully fought for the right to vote have been honoured in a life-size paper tribute handcrafted to mark 100 years of women’s suffrage.

Students on Birmingham City University’s Design for Performance course used 1,600 metres of brown paper and 500 metres of corrugated cardboard to craft an exhibition which features key figures from the Suffragette movement in the run up to the 1918 Representation of the People’s Act – which first handed women the vote.

Among the iconic characters on show are Christabel Pankhurst – daughter of perhaps the movement’s most famous name Emmeline Pankhurst – Flora Drummond who was nicknamed ‘the General’, and Ethel Smyth who was famed for conducting protests from her window using a toothbrush.

It also includes a full-scale horse and carriage being drawn through the streets of Georgian London, an act of civil disobedience, as a protester throws a stone through a shop window while two policemen look on, and a Suffragette who has chained herself to the railings of a government building.

The installation comes almost 100 years to the day (6th February 1918) that the Act was first passed and at a time when women’s rights are in the spotlight following the #MeToo and #TimesUp movements and the Presidents Club Charity Dinner scandal.

Students were given three weeks working around the clock to produce the exhibition, which will be open to the public from tomorrow  up until Friday February 16th at the University’s Parkside Building.

“For centuries, it has been a given that, in moments of sharp civic discontent, you and I and everyone we know can take to the streets, demanding change.

“People, often against tremendous odds, answer a call to show up and be counted for what they believe in.

To celebrate 100 years of certain women getting the vote, the students chose to focus the installation on The Suffragettes and the lengths they went to make their voices heard.

With links to modern day movements and protests the students have been keen to explore how, with the current state of the world, it is important to be inspired by The Suffragettes and have the courage to stand up for what we believe in and that there is still work to be done if this world is going to be a fairer place.”

The exhibition commemorates the prominent figures in the movement during 1918 and even has a nod to the Cat and Mouse Act which the government introduced in 1913 in a bid to counteract the hunger strike protests of imprisoned activists.

“It’s pretty hectic and you end up finding brown paper everywhere in your life. In your pockets, in your hair – it follows you everywhere.

The theme is great timing with it being the anniversary. But even then, that first step was only for women over 30 who were married, so there was still some way to go.”

First-year students were initially given the idea of ‘protest’ to base their exhibition around and after discussions opted to commemorate the centenary of women’s suffrage.

“When the theme of ‘protest’ came up, it seemed like a no brainer to pick the Suffragettes with it being the anniversary. With everything that is going on at the moment we are still seeing women’s protests right now and unfortunately it’s problem something we’ll still be seeing in another 100 years.”

“Because it’s such a serious and important theme you want to make sure you do it justice. These are real people from history that you’re modelling so you have to make sure things are correct and that everything is accurate.

We’re all so used to seeing people and human form that it’s easy to spot a mistake, so we’re spending a lot of time making sure all the body shapes and movements of the active models look right.

We’ve had a lot of late nights, staying at university until 11pm working and ordering pizzas because you have to give 100 per cent to a theme like this.”