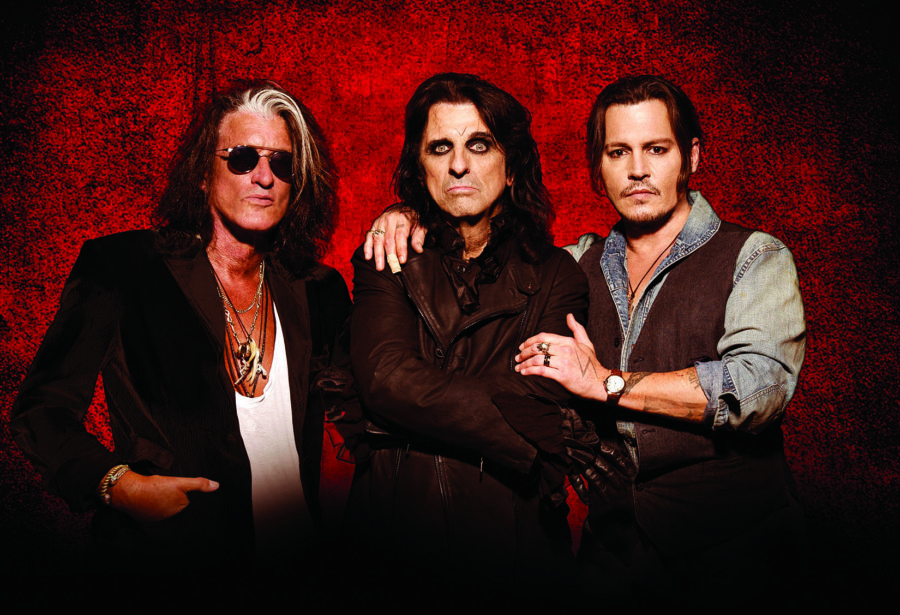 It’s an ensemble too good to be true but an rock supergroup formed by Johnny Depp and Alice Cooper is heading to Birmingham Genting Arena this summer.

As The Hollywood Vampires announce a run of four huge tour dates in the UK, opening at Birmingham’s Genting Arena, the band’s current main members – Alice Cooper, Joe Perry and Johnny Depp – are ready to deliver and have organised their schedules for 2018 to give their fans what they really want – more Vampires!

What started with an intimate, star-studded show at the Roxy Theatre in Los Angeles for family and friends, resulted in the Vampires wanting to play as much as possible, trekking across the globe during their short summer break before Joe, Alice, and Johnny had to return to their day jobs.

That wildly successful summer tour in 2016 took them to more than 23 cities and seven countries – traversing the world from Verona to New York to Bucharest and headlining festivals such as Rock in Rio to more than 100,000 fans.

Joining the Hollywood Vampires on their UK tour will be some of their rock star friends and modern-day Vampires, including The Darkness and The Damned.

A super-group comprised of rock and Hollywood royalty, the Vampires offer fans a non-stop, energetic concert like no other, including their original single Bad As I Am from their debut album The Hollywood Vampires released in 2015, plus renditions of some iconic rock favourites.

Just ahead of their UK tour launch, the band will be also performing with legendary Brummie rocker Ozzy Osbourne in Prague.

The story of the Hollywood Vampires began in the 1970s on the Sunset Strip at the Rainbow Bar & Grill’s upstairs bar. It was a gathering place for the rock stars living in or passing through L.A.

According to Alice Cooper, a founding member of the original Vampires:

“To join the club, one simply had to out drink all of the members. I would walk in on a typical night and John Lennon, Harry Nilsson, Keith Moon—who would usually be in a costume like a maid or a chauffeur—Bernie Taupin, and Mickey Dolenz would be there.”

Cooper and good pal Johnny Depp got together and decided the spirit of the Hollywood Vampires should live again (minus the drinking). Cooper and Depp were joined by long time mutual friend Joe Perry and the recording began: a tribute to the original Hollywood Vampires.

Who will be joining The Hollywood Vampires in the UK?

2003 gave birth to one of the most extraordinary and best loved bands in the UK. The Darkness released their debut album Permission To Land to overnight success, topping the UK charts, going 5x Platinum and selling over 1.5 million copies in the UK alone.

It spawned a series of hit singles including I Believe In A Thing Called Love, Growing On Me, Get Your Hands Off My Woman and Love Is Only A Feeling; and clocked up a series of awards including three BRIT Awards, two Kerrang Awards and an Ivor Novello for ‘Songwriters Of The Year’.

The band have returned in 2017 with Pinewood Smile, their first album to come through Cooking Vinyl. Ahead of the album’s announcement, The Darkness toured Europe in support of Guns N’ Roses and are playing a number of festivals in the UK and Europe during the summer.

Formed in 1976, The Damned released the first ever British punk single and album. They also broke further new ground, being the first UK punk act to tour America. The Damned still receive their dues in the US, where they are often cited as a major influence on many future rock acts, including icons such as Black Flag, Bad Brains, Green Day, The Offspring and Guns ’N’ Roses. The band recently celebrated four decades together with a deluxe reissues package and a world tour.

The Hollywood Vampires will be playing Birmingham’s Genting Arena on Saturday 16th June 2018.
Tickets are on general sale from 9am on Friday 9th February 2018. For tickets, click here.