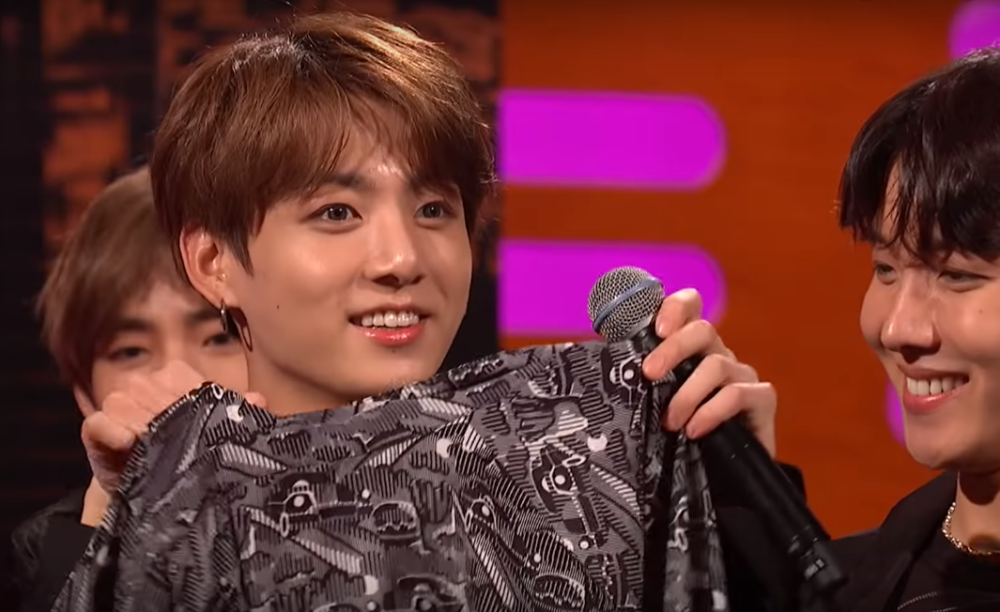 K-Pop sensations BTS have been gifted with Whoopi Goldberg’s shirt, right off her back, as the band appeared alongside the US film and TV star, on The Graham Norton Show this week.

62-year-old Academy-award winning Whoopi was so impressed with the band, she insisted on giving them her shirt, which she explained echoes the values of unity they were sharing on the chat programme.

“I’m giving them my shirt” she announced. “I’m giving you this to thank you for all of the joy you’re bringing. This is my design. If you look closely, it’s all about movement and people. It’s for you.”

Earlier in the show, she admitted that her daughters and grand-daughter were fans of the band. The band were also given the opportunity to join Whoopi Goldberg in introducing the show together to kick-off the recorded proceedings.

Appearing in the UK for the first time as part of a worldwide tour, the Korean music stars sat on Graham’s famous couch alongside actors Jamie Dornan, Rosmund Pike and musician Harry Connick Jnr., for their first exclusive television appearance on British screens.

Having only just performed a completely sold-out London date at the city’s O2 Arena for 40,000 of the ‘Army’ (the name given to and used by their loyal fans), the twenty-somethings were met with unstoppable fan-girl screams as they appeared on the popular BBC show, at times drowning out their responses to Graham Norton’s questions.

Although usually a seven-piece, there was an obvious absence on the celebrity couch yesterday evening, as band member Jimin was forced to pull out following “severe muscle pain” during rehearsals.

BTS fans were,  however, treated to Jungkook singing Jimin’s line during their energy-pumped performance on the show.

The boys ended their time on the show by thanking their fans and plugging their new album, Love Yourself: Answer. Their BTS ‘Love Yourself’ World Tour continues its run, heading from London to Amsterdam today before hitting Berlin and Paris in the days to come. The tour is a response to their newly found global fame and ends in April next year.

Watch Whoopi Goldberg and BTS on the Graham Norton Show:

BTS is short for Bangtan Sonyeondan, literally meaning Bulletproof Boy Scouts, though last year they expanded the meaning to ‘Beyond the Scene’ as their music and reputation went mainstream.

The seven-strong K-pop group currently dominating the pop world are all in their twenties and have an international fan base which spans across all age, gender and cultural groups; one of the first non-English language boy bands to have gained such a stronghold in the industry.

The band members are RM, Suga, Jungkook, V, Jimin, Jin, and J-Hope, and such is their reach, they’ve not only addressed the UN but also landed TIME magazine’s current cover where they’re presented as the publication’s “Next Generation Leaders”.