What was Game of Thrones star Maisie Williams doing at a Birmingham university? 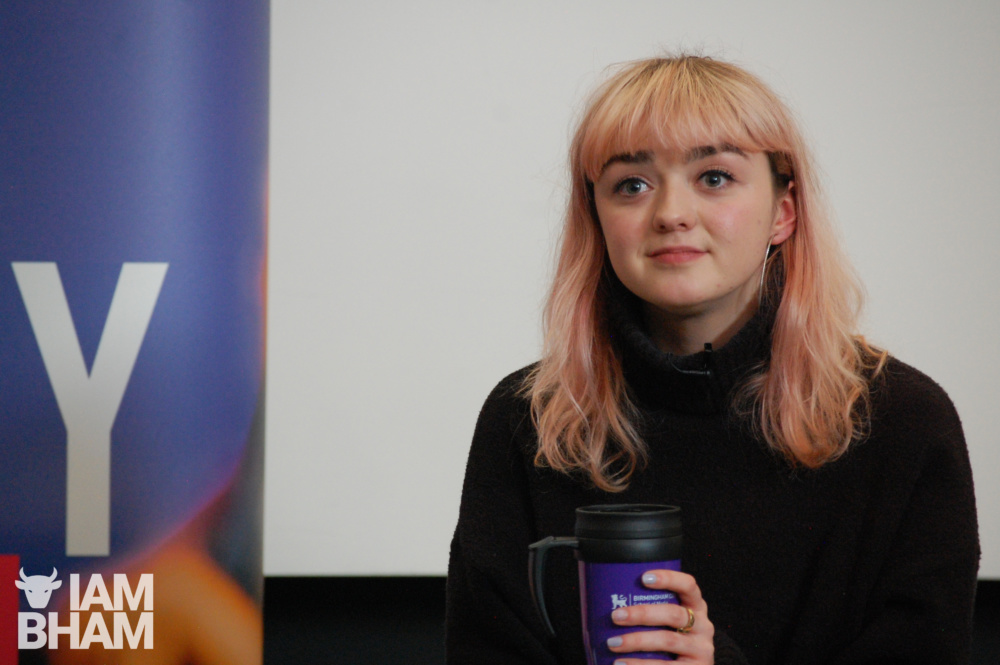 Television and movie star Maisie Williams, aka Game of Thrones‘ Arya Stark, made an appearance at Birmingham City University yesterday. The lecture theatre was packed with students eager to hear from a fellow millennial about her newest endeavour as an app developer.

The Bristol-born actress launched her app Daisie in partnership with Dom Santry last August. What was her take away advice from today’s talk? Probably something you’ve heard from your parents. Here’s what Maisie Williams had to share with Birmingham’s best and brightest…

Her journey to Game of Thrones…

Maisie began by catching us up on her career so far (we heard she’s in that hit fantasy drama series – Game of Thrones?). Maisie told students about her dream of becoming a dancer at the age of eight. After not progressing past auditions, she got her big break when she was 12 years old, and became Arya Stark on hit HBO show Game of Thrones (GoT).

Williams said she was an average student and was not very academic. Yet, she is proud of the fact she has become an actor and entrepreneur with “no qualifications what so ever!” – probably not the most reassuring thing to hear when you have spent upwards of £27K on a degree. Then again, we can’t all be Maisie Williams *sighs*. Maisie told her millennial peers that to survive in the media industry, it is not what you know, but who you know.

“Talent will take you further than 15 mins of fame,” the 21-year-old told School of Media students.

The creation of the Daisie app

Having listened to friends talk about their frustration at trying to get in to the creative industry, Maisie decided to do something about it and create a social media app exclusively for this crowd.

Think along the lines of Instagram meets Depop meets LinkedIn. The app allows you to connect, collaborate, view the work of other creatives and showcase your own work. Williams said she hopes the platform will help young creatives to build connections and get their name out there.

She explained: “Before Daisie, success in the creative industries has been wholly dependent on luck and ‘ins’ to the industry.

“Daisie introduces a new way into the creative world, through connections made organically and the natural development of your skills, propelling individuals to the next level.”

“I have no intention of slowing down”

We’re glad to hear it! Maisie doesn’t know what will be on the cards over the next few years of her career, but she shared her excitement and said, “If I can make an app, what else can I do?”

I had to ask @Maisie_Williams about the @bcumedia students. Great to hear them described as the best she’s met because they were engaged and asked great questions. Can’t beat that @MyBCU pic.twitter.com/Kg8PAUj1Mx

Finally, what’s lined up in season 8 of GoT?

Pfft! Like she’s going to tell us that, she wouldn’t even tease the crowd with any tid bits. I guess we’ll have to wait and see. Maisie, on the other hand, said she’s glad her character has survived this long, her goal was season 8 and according to the books, Arya Stark dies. Maisie said the hit TV series steered away from the books ages ago though, so who knows what lies ahead for young Arya.

Maisie returns to our TV screens as Game Of Throne returns for its eighth and final season on April 14. The show – based on George RR Martin’s fantasy novels – also sees the return of cast favourites Kit Harington, Emilia Clarke and Peter Dinklage, reprising their roles as Jon Snow, Daenerys Targaryen and Tyrion Lannister. Lena Headey also returns in the guise of Cersei Lannister.