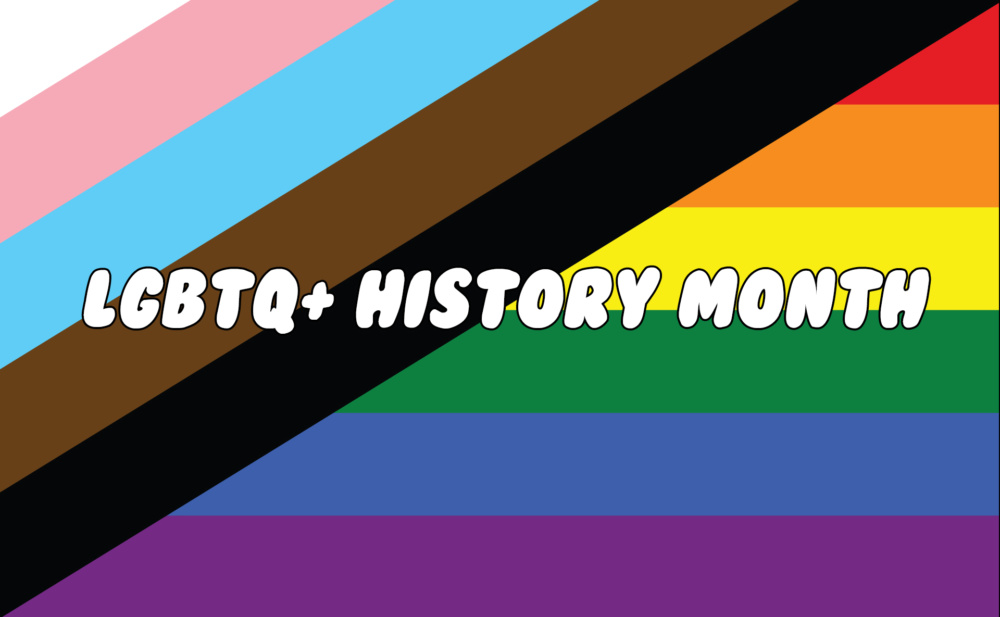 LGBT History Month takes place in the UK in February

In the UK, February of each year has been set aside to mark and celebrate the lives and achievements of Lesbian, Gay Bisexual, Trans and Queer+ people and this year’s LGBT History Month theme is Peace, Activism and Reconciliation.

In the United States and Canada, it’s celebrated in October to coincide with National Coming Out Day on October 11. However, over here it is observed during February, to coincide with a major celebration of the abolition of Section 23 in 2003, which until that point prevented local authorities in England and Wales from promoting homosexuality.

On 7th February 2000, the first attempted legislation to repeal Section 28 was introduced by the Labour Government as part of the Local Government Act of 2000, but was defeated by a House of Lords campaign led by Baroness Young. The then Shadow Education Secretary – and current British Prime Minister – Theresa May called the defeat of the repeal “a victory for commonsense”. It was eventually repealed in 2003.

It is a well known fact that throughout history LGBTQ+ people have had to hide themselves in society for their own safety. The fear of discrimination and persecution, even to the point of genocide, has always been a looming threat to many queer people throughout history. LGBTQ+ people have also frequently been ignored, and discriminated against by society, despite their achievements and contributions to humanity.

In the last 100 years, LGBTQ+ rights have come a long way. LGBTQ+ History Month reminds us to look back and reflect on not only the pivotal moments that have changed humanity’s path in regards to LGBTQ+ rights for the better but also to look at how the low moments of desolation for LGBTQ+ groups came to pass and how, as a society, can avoid repeating the same mistakes.

The last 100 years of LGBTQ+ history

1919 – In Berlin, Germany, Doctor Magnus Hirschfeld co-founds the Institut für Sexualwissenschaft (Institute for Sex Research), a pioneering private research institute and counseling office. Also in 1919, Different From the Others, one of the first explicitly gay films, was released with a cameo role from Dr. Magnus Hirschfeld. Dr. Magnus Hirschfel also partially funded its production.

1921 – In England, an attempt to make lesbianism illegal for the first time in Britain’s history fails.

1928 – The Well of Loneliness by Radclyffe Hall is published in the UK and later in the United States. This sparks great legal controversy and brings the topic of homosexuality to public conversation.

1933 – The Nazis ban homosexual groups. Homosexuals are sent to concentration camps. Nazis burn thousands of books in the library of Magnus Hirschfeld’s Institute for Sexual Research, and destroy the Institute itself.

1937 – The first use of the pink triangle for gay men in Nazi concentration camps.

1958 – The Homosexual Law Reform Society is founded in the United Kingdom.

1967 – The Sexual Offences Act 1967 decriminalised homosexual acts between two men over 21 years of age in private in England and Wales. The act did not apply to Scotland, Northern Ireland nor the Channel Islands. The book Homosexual Behaviour Among Males by Wainwright Churchill breaks ground as a scientific study approaching homosexuality as a fact of life and introduces the term “homoerotophobia”, a possible precursor to “homophobia”

1969 – The Stonewall riots occur in New York City with Marsha P. Johnson often credited with throwing the first brick, Johnson was one of the first drag queens to go to the Stonewall Inn, after they began allowing women and drag queens inside; it was previously a bar for only gay men. Johnson was described by David Carter in his book, Stonewall: The Riots That Sparked the Gay Revolution, being one of “three individuals known to have been in the vanguard” of the push back against the police at the uprising. Johnson denied she had started the uprising, stating that when she arrived and that the Stonewall building “was on fire” after cops set it on fire.

1971 – The UK Gay Liberation Front (GLF) was recognised as a political movement in the national press and was holding weekly meetings of 200 to 300 people.

1972 – The UK’s first Gay Pride march is held from Trafalgar Square to Hyde Park in July.

1978 –  The rainbow flag, created by an openly gay man, drag queen and artist Gilbert Baker, is first used as a symbol of LGBT+ pride. A number of variations and sub flags follow over the years.

1981 – The European Court of Human Rights in Dudgeon v. United Kingdom strikes down Northern Ireland’s criminalisation of homosexual acts between consenting adults, leading to Northern Ireland decriminalising homosexual sex the following year. The first official documentation of the condition to be known as AIDS was published by the US Centers for Disease Control and Prevention (CDC) on 5 June 1981

1982 –  AIDS had acquired a number of names – GRID5 (gay-related immune deficiency), ‘gay cancer’, ‘community-acquired immune dysfunction’ and ‘gay compromise syndrome’. The CDC used the term AIDS for the first time in September 1982, when it reported that an average of one to two cases of AIDS were being diagnosed in America every day.

1984 – Chris Smith, newly elected to the UK parliament declares: “My name is Chris Smith. I’m the Labour MP for Islington South and Finsbury, and I’m gay”, making him the first openly out homosexual politician in the UK parliament. British LGBTQ magazine Gay Times is  first published.

1985 – The first memorial to gay Holocaust victims is dedicated. Actor Rock Hudson dies of AIDS. He is the first major public figure known to have died from an AIDS-related illness.

1987 – Margaret Thatcher delivers the imfamous “Children are being taught they have an inalienable right to be gay!” speech to the Conservative party conference in Blackpool, on October 9th, 1987.

1991 – The red ribbon is first used as a symbol of the campaign against HIV/AIDS.

1992 – The Isle of Man (UK) repeals laws on sodomy however homosexuality is still illegal.

The first Dyke March (a march for lesbians and their straight female allies, planned by the Lesbian Avengers) was held, with 20,000 women attending.

1994 – The Isle of Man (UK) decriminalises homosexuality. The UK reduces the age of consent for homosexual men to 18.

1995 –Triple combination therapy of drugs such as 3TC, AZT and ddC shown to be effective in treating HIV, the virus responsible for AIDS. Kings Cross Steelers, the world’s first gay rugby club, was founded.

1996 –The first lesbian wedding on television is broadcast, held for fictional characters Carol (played by Jane Sibbett) and Susan (played by Jessica Hecht) on the TV show Friends.

1997 – Ellen DeGeneres comes out as lesbian, and later in the same year her character Ellen Morgan came out on the TV show Ellen, making her the first openly lesbian actress to play an openly lesbian character on television.

1998 – Murder of Rita Hester whose death inspired the “Remembering Our Dead” web project and the Transgender Day of Remembrance.

Murder of Michael Sheppard whose death brought national and international attention to hate crime legislation at the state and federal levels in the USA.

Dana International became the first transsexual to win the Eurovision Song Contest, held in Birmingham in 1998, representing Israel with the song “Diva”.

The first bisexual pride flag was unveiled on 5th December 1998.

UK ends to ban on gay people in the military and equalises the age of consent to 16.

The Transgender Pride flag was first shown, at a pride parade in Phoenix, Arizona.

2001 – The rest of the United Kingdom’s territories decriminalises  homosexuality. Helene Faasen and Anne-Marie Thus, from the Netherlands, became the first two women to legally marry.

2003 –  United Kingdom repeals of the concept of Buggery in law. Section 28 is repealed in England and Wales and Northern Ireland.

Luna, by Julie Anne Peters, was published, and was the first young-adult novel with a transgender character to be released by a mainstream publisher

The Roman Catholic Church issues an instruction prohibiting any individuals who “present deep-seated homosexual tendencies or support the so-called ‘gay culture'” from joining the priesthood.

The Simpsons became the first cartoon series to dedicate an entire episode to the topic of same-sex marriage.

The first European Transgender Council Meeting was held in Vienna.

2006 –The International Conference on LGBT Human Rights is held in Montreal. Section 28 “successfully repealed” in Isle of Man.

Carol Ann Duffy was chosen as the first openly lesbian or gay Poet Laureate of the United Kingdom.

2012 – Barack Obama became the first U.S. president to publicly announce support for same-sex marriage on 9 May.

California became the first U.S. state to sign a ban on therapy that claims to convert gay people into heterosexual.

The Bisexuality Report, the first report of its kind in the United Kingdom, was issued. This report, led by Meg Barker, Rebecca Jones, Christina Richards, Helen Bowes-Catton and Tracey Plowman summarises national and international evidence and brings out recommendations for bisexual inclusion in the future.

2013 – Same sex marriage laws were passed in England and Wales.

Daniel Kawczynski became the first MP in Britain to come out as bisexual.

The first United Nations ministerial meeting on the rights of lesbian, gay, bisexual and transgender individuals was held.

Cason Crane became the first openly gay man to summit the Seven Summits and the first to bring the rainbow flag to the summit of Mount Everest.

Jennifer Pritzker came out as transgender in 2013 and thus became the world’s first openly transgender billionaire.

The first same-sex kiss ever on a Eurovision stage occurred at the 2013 Eurovision Song Contest when Krista Siegfrids, who sang “Marry Me”, ended her semi-final performance by kissing one of her female dancers.

2014 – Same Sex marriage laws passed in Scotland and came into effect in England and Wales.

California became the first state in the U.S. to officially ban the use of trans panic and gay panic defences in murder trials.

Tim Cook, the CEO of Apple Inc., came out as gay, thus becoming the first openly gay CEO on the Fortune 500 list.

Queen Elizabeth II praised the London Lesbian and Gay Switchboard for their 40-year history making it the first time the Crown has ever publicly supported the LGBT community.

2015 – Laws regarding Same Sex marriage in the United States passed and came into effect at a nationwide level.

EastEnders chose Riley Carter Millington as the first openly transgender actor in UK TV soap history; he played ‘Kyle’, a man who has transitioned from female to male, which Riley did in real life.

2016 – Lea T became the first openly transgender person ever to participate in the opening ceremonies of an Olympics when she led the Brazilian team into the stadium on her bike during the 2016 Rio Olympics.

2017 – Moonlight became the first LGBT-related film to win the Best Picture award at the Oscars.

2018 –  Prime Minister Theresa May, issues an apology expressing “deep regret” for Britain’s role in imposing colonial laws that criminalize LGBT people across the Commonwealth and the legacy of violence and discrimination that persists today. At the time of the apology, 36 of 53 Commonwealth countries still had colonial-era criminalisation laws.

Love, Simon starring Nick Robinson was released as the first film ever released by a major studio to focus on a gay teenage romance.

The Vatican used the acronym LGBT in an official document for the first time.