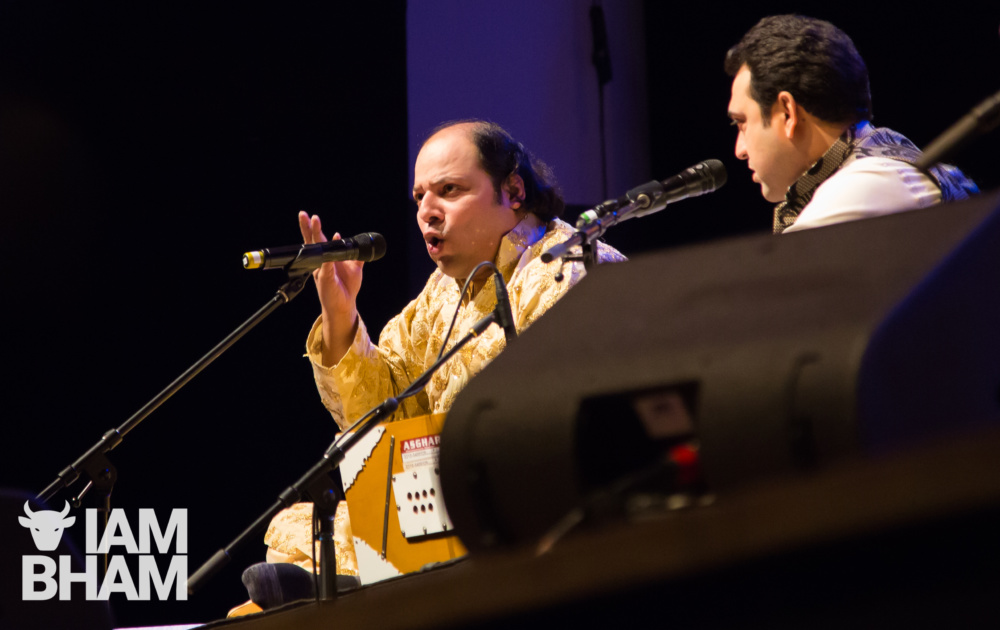 The intensity that Rizwan brings to the stage is reminiscent of the late Nusrat Fateh Ali Khan (Photo: Ranjit Dhillon)

Following on from their UK tour in 2017, the duo were back by popular demand and returned with new interpretations of qawwali – a form of Sufi Islamic devotional music.

Having performed together since the 1990s, they have a rich family history of qawwali singers that stretches back over five centuries.

The faces of the audience lit up as they demonstrated their virtuoso voices with the opening track, ‘Allah hoo’. The intensity that Rizwan brings to the stage is reminiscent of the late Nusrat Fateh Ali Khan and rapturous applause was frequently given when he reached the peak of his vocal ability.

He displayed his versatile skills by hitting different notes, almost instantaneously, in his unique style. There is no doubt that the brothers are extremely blessed vocally and possess inimitable ability.

Rahat Ali and Ghulam Abbas delivered a magnificent performance with the accompanying harmoniums and added much diversity to the hypnotic repetitions.

Overall, Rizwan- Muazzam Qawwals have successfully carried the torch for traditional qawwali music into the modern era and are keeping Nusrat Fateh Ali Khan’s legacy alive with their intoxicating and entrancing renditions.

Birmingham local and qawwali enthusiast Rishi Kaushal explained how qawwali has been passed down from generation to generation in his family. In the 1980s, his elder grandad Yog Raj Kaushal had met sufi mystics who were visiting Baba Hazrat Qutab Shah in Khangah, Jandiala – a village in Punjab, India. Every year, singers such as Hans Raj Hans pay their respects to his elder grandad at his sacred place in Jandiala.

Rizwan and Muazzam described to I Am Birmingham, “Qawwali is the real message of God, it is a spiritual message. It is a message of peace and love. There are certain musical platforms that may exclude people but qawwali is a genre that brings people from different faiths and backgrounds together.”

In regards to their Uncle, Rizwan mentioned that the greatest single thing his uncle had taught him was that there is one love for everyone. Rizwan added, “Before Nusrat there was no one that did qawwali like him and after Nusrat there will be no one.”

When questioned about the message of his music. Rizwan and Muazzam explained, “Muslims, Hindus and other religions – we are one. We shouldn’t be apart and we should stay as one and respect each other. Personally, music is our purpose in life and will be our eternal one”

You can find out more about future tours by Rizwan – Muazzam Qawwals at rizwanmuazzam.com and tours by contemporary and traditional South Asian musicians at www.asianartsagency.co.uk.