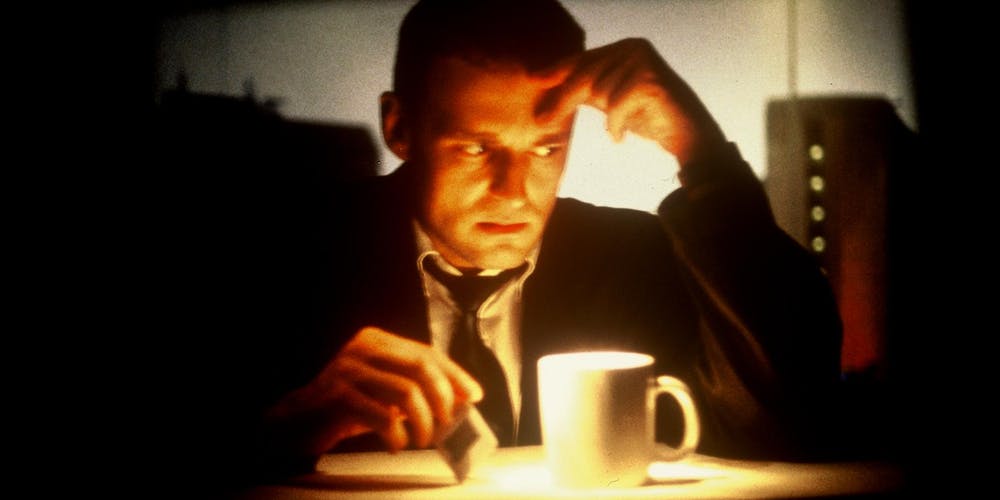 Experimental theatre company Stan’s Cafe has brought an economical, yet intensely powerful, show called ‘It’s Your Film’ to the The Lansdowne in Birmingham. This free show combines cinematic and theatrical techniques to give the audience a unique and startling experience.

‘It’s Your Film’ by Stan’s Cafe takes one member of the audience into a booth to watch a story unfold through a small aperture. That small window in the booth provides a glimpse into world of mystery and deep shadows. The inky darkness comes to life as a man feverishly tries to light a cigarette in the velvet black shadows of the confined space beyond the rectangular opening. An atmosphere of immediacy and urgency is quickly established.

You no longer feel the same ‘safety’ that one feels when snuggling into a comfortable seat at the cinema or theatre where everything is ‘routine’ and ‘ordered’. That sense of ‘security’ and being lulled into the experience are dispensed with in this new work by Stan’s Cafe.

You are uncertain about what to expect and the immediate effect of the unearthly sounds that surround you in the booth unsettles and puts you on edge. ‘It’s Your Film’ is an interesting and daring work that engages the senses as soon as you step into the hazy nether darkness of the booth.

The small opening in the booth looks into a world of inky pools of darkness with writhing shadows. A discordant soundtrack rattles the mind as two characters search for clues to a mystery that unfolds rapidly. The two performers use their eyes and body language in a manner that resembles a montage of still images from the murky and smoky world of Film Noir.

The element of photography, still images, and their power to conjure up past memories seemed to come alive with the way the actors were lit in this atmospheric production. Every scene was stylized like a snapshot, a moment frozen and etched in time before it faded and was quickly replaced with another tableau.

The narrative is fast moving and fragmented yet it successfully conveys the central themes of loneliness, memory, longing, and the impact of the external landscape upon the inner workings and emotional turmoil of human existence.

Stan’s Cafe, a theatre company based in Birmingham which specializes in experimental theatre and art installations, demonstrates that when it comes to stories and suspense you do not need a multi-million pound budget with a cast of thousands and wall-to-wall CGI trickery. This production employed two actors in non-speaking roles and used a small space to tell an intimate short story that leaves a residue in the mind.

‘It’s Your Film’ runs for just under five minutes and once it has ended the audience member is led out of the viewing booth and invited to watch behind the scenes as the next performance is prepared and performed.

The technical aspects of the production hearkened to the era of early cinema around the turn of the last century. The technique of using strategically placed mirrors and lights around the small space, and projecting backdrops upon the bare walls may have been tricks borrowed from the Edwardian era but the impact was powerful and dramatic, and it got under the skin.

This is one dramatic experience that will stay with you far longer than the next time you venture into a cinema to watch a blockbuster. That sense of being in a truly intimate space, and having a performance played within a few feet from your eyes will ignite your mind and imagination in an unexpected and refreshing way.

James Yarker, the artistic director of ‘It’s Your Film’, employs a swift moving momentum and flow which is exhilarating yet subtle. His method of using lighting styles and cinematic trickery that goes back a hundred years actually pushes this production into the future with the way the visuals and sounds are absorbed by the single member of the audience in the confined space of a viewing booth.

The psychological claustrophobia produced by the various techniques in this production leaves an emotional impact upon the viewer in a really startling manner. This is a journey where the lines between audience and performance are blurred. James Yarker uses illusion to remove the veils of modern theatrical and cinematic artifice. He places the viewer in the milieu of the narrative and provides a unique experience.

‘It’s Your Film’ by Stan’s Cafe has changed the game with this innovative and exciting theatrical production that hits the senses in unexpected ways. This combination of immersive theatre and cinema, with a very intimate use of space, will energize the minds of those who have become somewhat jaded with overblown and extravagant productions that leave you feeling cold and empty.

Stan’s Cafe will be performing ‘It’s Your Film’ at various times at the Lansdowne until Sunday 12th May. You can select your day and time slot and book your free tickets here.

(Visited 534 times, 1 visits today)
https://www.iambirmingham.co.uk/2019/05/10/stans-cafe-offer-theatrical-game-changer-experience/https://www.iambirmingham.co.uk/wp-content/uploads/2019/05/https-_cdn.evbuc_.com_images_58553957_147066552701_1_original.20190315-153014-800x400.jpghttps://www.iambirmingham.co.uk/wp-content/uploads/2019/05/https-_cdn.evbuc_.com_images_58553957_147066552701_1_original.20190315-153014-300x150.jpg2019-05-10T19:40:02+00:00Rangzeb HussainEntertainmentReviewsShowbizWhat's OnB'ham,Birmingham,Brum,Drama,Entertainment,Film,Film Noir,I Am Bham,I Am Birmingham,it's your film,Lansdowne,Live performance,Midlands,Performance Art,Rangzeb Hussain,Review,Reviews,Show,stans cafe,the lansdowne,Theatre,UK,weekend,West MidlandsExperimental theatre company Stan's Cafe has brought an economical, yet intensely powerful, show called 'It's Your Film' to the The Lansdowne in Birmingham. This free show combines cinematic and theatrical techniques to give the audience a unique and startling experience. 'It's Your Film' by Stan's Cafe takes one member of the audience...Rangzeb HussainRangzeb Hussain[email protected]AuthorI Am Birmingham
« Soweto Kinch, Salma Yaqoob, Maz Saleem and Lowkey pledge support for pro-Palestine rally
Birmingham LGBT unveils new inclusive flag for this year’s Pride celebrations »