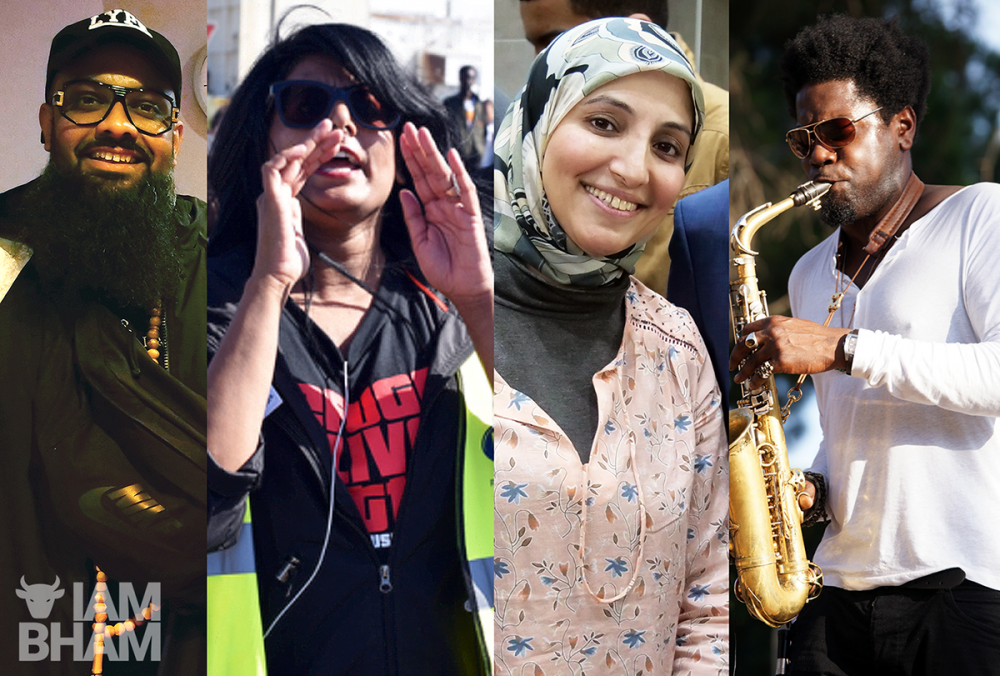 Birmingham activists, literature and arts personalities and politicians are to join a national demonstration in London tomorrow, marching through the capital in support of the Palestinian people.

To mark the beginning of the Nakba week of action, and responding to recent attacks on Gaza by the Israeli army, thousands of people are expected to converge in Portland Place before marching to Whitehall on Saturday (11 May), amongst them Birmingham poet Benjamin Zephaniah and city anti-war activists Salma Yaqoob and Maz Saleem.

The demonstration is expected to be the largest in Britain since mass protests and rallies were held during the summer of 2014, after severe violence erupted in the Middle Eastern region, which left 1,462 Palestinian civilians dead over the course of seven weeks of heavy military bombardment from Israeli forces.

In similar but less fatal circumstances this month, 25 Palestinians were killed by the Israeli Defence Force (IDF) while four Israelis died during a flare-up of conflict over several days. A temporary ceasefire has been called but tensions continue to mount.

From Birmingham, literary icon Benjamin Zephaniah will be joining the rally. The actor, author and celebrated spoken word performer is a long-term staunch supporter of the Palestinian cause, self-determination of its citizens, and the Boycott, Divestment and Sanctions (BDS) movement.

In a promotional video for the event, Benjamin Zephaniah compared the Palestinian fight for freedom with that of South Africa.

“When I was young, there were two things that I really wanted to see; a free South Africa, and a free Palestine. South Africa is now free. It’s not perfect, but at least the South African people have the right to help shape the destiny of their country.

“But what about the Palestinian people? Their destiny will be decided by President Trump and the Israeli government. Well, it will if the world stands by and does nothing.”

Brummie anti-war activists Maz Saleem and Salma Yaqoob have pledged to join the demonstration. Saleem, who has been speaking out against Islamophobia and hate since her father was brutally murder by a neo-Nazi in Birmingham in 2013, is a committed supporter of the Stop the War Coalition.

Currently filming a documentary on Islamophobia, which has taken her across Bosnia and Britain, she wrote online: “Gaza is under heavy attack and they try to silence our voices again and again. To be anti-racist, one has to be anti-Zionist. Israel is a racist endeavour!”

In a video posted to her Facebook page, Lowkey said: “I am calling on you to come to [the] May 11th demonstration in central London to support the Palestinian people on their Great March of Return, their right under UN Resolution 194 to return to their homeland.”

In March, Yaqoob tweeted: “It’s election time in Israel. And Netanyahu is facing serious charges. So of course he unleashes a “war”. Except it’s just massacre. #Gaza has no defences, no airforce, & population is hemmed into a tiny strip of land. God help them.”

Having been jointly organised by movements including the Palestine Solidarity Campaign (PSC) and the Stop the War Coalition (StWUK), the aim of the march is to show solidarity with the Palestinian people, ‘condemn their mistreatment by the Israeli army and government, and send a message to world leaders who decide on their fate’.

Birmingham-based musician and alto-saxophonist Soweto Kinch amplified Palestinian awareness and support by adding his weight behind the event.

“It’s incredibly important to me to support the demonstration supporting Palestine on 11th of May. It’s an ongoing issue but they’re obviously trying to marginalise and silence Palestinian voices with everything that’s happening. Obviously, moving administrative centres to Jerusalem, all the violence, all the ongoing violence has been silenced by our UK media; and as usual, the privileging of certain voices over Palestinian voices.

“I was lucky enough to go to Ramallah in 2011, a long time ago, but to meet Palestinian Christians, to meet whole groups of communities, MCs, artists, which would explode my perception of what is actually happening in Palestine. Even meeting child soldiers on the border, 18-year-old Israelis holding guns, you realise that this is not a healthy or sustainable situation for anyone who’s involved there.

“Make your voices heard in solidarity, show out for the movement, and let people know [that] this isn’t even about religions, it’s about human rights, human dignity, step out and let’s put a stop to these ridiculous and fundamental injustices happening in Palestine.”

While dub poet and Peaky Blinders actor Zephaniah reflected on the current situation regarding Palestine and its people, saying:

“Now, we all know that Israeli settlements are illegal under international law, but now the plan is to go even further and annex the settlements. They want to demolish Palestinian villages that have been inhabited for thousands of years, and they want to deny Palestinian refugees the right to return.

“Clearly this is illegal, corrupt, immoral, and will affect Palestinians for generations to come. Trust me, the world does not need more stateless Palestinians, the world needs free Palestinians. People will be taking to the streets all over the world to show solidarity with the Palestinian people, and to express outrage at what is happening to them.

He continued: “I started by referring to the hard-won freedom of the South African people, but Nelson Mandela made it absolutely clear, he said: ‘we know too well that our freedom is incomplete without the freedom of the Palestinians.’

“We is all of us. So, please join us. Come make some noise for Palestine. Let us come together as one and send a message to Trump and Netanyahu. Let us tell them that whatever they do in the dark, will be revealed in the light. Let them know that the world is watching.”

The famous Rastafarian, political activist and ardent vegan – who is a supporter of the BDS (Boycott, Divestment and Sanctions) movement – will be joining the march in the capital, and is expected to speak alongside prominent supporters of peace in Palestine.

Also joining the chorus of condemnation of Israeli military might is Guz Khan, star of BBC’s Man Like Mobeen. The actor and stand-up comic has been sharing quotes about the situation in the Palestinian territories on his Twitter feed.

“‘This is for Palestine, Ramallah, West Bank, Gaza, this for the child who is searching for an answer, wish I could take their tears and replace them with laughter, long live Palestine, long live Gaza,'” he tweeted.

“This is for Palestine, Ramallah, West Bank, Gaza, this for the child who is searching for an answer, wish I could take their tears and replace them with laughter, long live Palestine, long live Gaza.”

Whilst we enjoy our Ramadan in peace remember how they will spend theirs 😞 pic.twitter.com/jFydvOr5IJ

People from across the country are expected to attend the demonstration, which begins in Portland Place, outside the BBC studios in London before making its way to Whitehall.

The march and rally has been called by the Palestine Solidarity Campaign UK (PSC) with support from Friends of Al Aqsa, Stop the War Coalition, Muslim Association of Britain and the Palestinian Forum in Britain (PFB). Numerous community groups, trade unions and political organisations are expected to join the mass demonstration too.

According to demonstration organisers: “The Palestinian people need our solidarity more than ever, and are calling for global protests to protect their collective rights.

“As Israel continues to flout international law and violate human rights, there is a responsibility on the global community to hold it to account and push for an end to the oppression of the Palestinian people.”

The public event will mark the beginning of Nakba Week, an annual period of action to commemorate what Palestinians describe as the ‘Nakba’, or catastrophe.

According to the PSC, “between 1947 and 1949, Zionist paramilitary forces ethnically cleansed and eradicated over 500 villages and cities in Palestine, displacing 750,000 Palestinians and taking over 78% of the land.”

Today, an estimated 7 million Palestinian refugees are scattered around the world. These refugees are denied their right of return by Israel; a right demanded by tens of thousands of Palestinians.

Birmingham organisers have arranged two main coaches to head to the event, which will leave at 8.30am; one from outside Carrs Lane Church in the city centre and another from outside the Birmingham Central Mosque in Highgate. A coach is also leaving from Walsall at 7.45am from the Abu Bakr Mosque.

The pre-planned protest comes in the wake of fresh hostilities in the Gaza Strip, after violence flared up during a protest against the blockade of Gaza.

Israeli military aggression towards Palestinian protesters resulted in militants launching rockets into Israeli air space, prompting retaliatory air and artillery strikes from the Israeli army. At least four Israelis and 25 Palestinians were killed, including a woman and her 14-month-old niece, according to reports.

The Gaza health ministry says civilians, including a 12-year-old boy and two pregnant women, were also among those reportedly killed.

In Israel, casualties include a 58-year-old man who died from injuries after a rocket struck a house in Ashkelon, a 67-year-old killed when his car was reportedly struck by an anti-tank missile, and a 21-year-old killed in the southern city of Ashdod.

The recent attacks and counter-attacks have been described as the largest surges in violence since the summer of 2014, when Israel launched a ground offensive on Gaza as a response to the kidnapping and killing of three Israeli teenagers.

According to the UN, the conflict reportedly resulted in the death of 2,251 people, including 1,462 civilians, on the Palestinian side during the seven-week conflict; and the death of 67 Israeli soldiers.

The National Demonstration for Palestine takes place on Saturday 11th May in London from 12pm. More details can be found on Facebook here. Birmingham coach information can be found via the PSC website here.