Lowkey, Lady Sanity and Foka Wolf to perform at the Festival of Audacity after-party 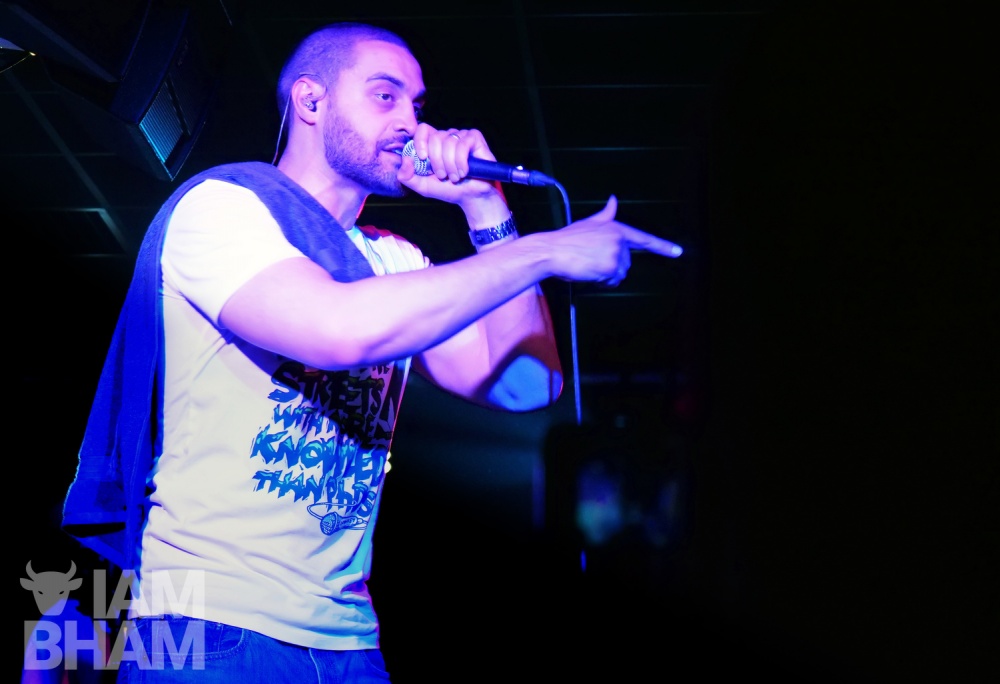 British rapper Lowkey will in Birmingham this weekend for the Festival of Audacity (Photo: Adam Yosef)

Rapper Lowkey will be headlining a huge afterparty of hip-hop and art activism to mark the end of Free Radical’s Festival of Audacity this weekend, taking place at The Mill Digbeth.

With a range of artists being headlined by award-winning hip-hop artist Lowkey, the event will celebrate the end of the Festival of Audacity which is taking place from tomorrow (July 18).

The Festival Of Audacity; a multidisciplinary festival of activist art making Birmingham its stage.

According to organisers, “For art to have a real impact, it needs to be bold. Festival of Audacity empowers young artists by making space for them to take risks and enables people to experience new art in unexpected places. By opening the city up, this Festival makes Birmingham its stage.

“We programme activist art. Activist art aims to change how individuals and societies think, amplify unheard voices, shed light on the unseen, and turn suffering and injustice into hope and power. There is no fixed way of being an activist, it’s why we programme multidisciplinary work – from dance, film, poetry, theatre, VR and more.”

The British-Iraqi hip hop artist and activist has returned to music after an 8-year hiatus with an explosive new album, Soundtrack To The Struggle 2, has sold over 25k albums digitally and now comes to Brum following his recent Glastonbury set.

Dubbed as “the most important album of the decade”, Lowkey will showcase this new material that challenges the political status quo and champions the perspectives of the oppressed alongside the city’s most talented artists.

Fresh from Wireless Festival, Erdington’s own Lady Sanity has represented the city on the national and global stage, seeing her Commonwealth Games performance streamed to one billion viewers.

Lady Sanity was part of last year’s line-up of female artists for ‘Pass The Mic’ and returns to the Festival while being a great role model for women in the genre.

Brum’s answer to Banksy, Foka Wolf brings their talent indoors for attendees to get a step closer to the creativity of one of the most mysterious and witty street artists.

Something of an enigma the artist (or is that ‘artists’?) has made the gentrification of Birmingham his/her canvas and playground.

The pastings of Foka Wolf have certainly garnered him/her a fair bit of attention in recent months with The Metro, The London Evening Standard and even the BBC covering this bastard child of Viz and MAD Magazine.

The artist will be bringing thier artistry and satire to the Festival of Audacity after-party.

But this festival is all about young people. RhyanRhyan is a talented illustrator and designer on Free Radical’s BAIT training programme to develop young, socially-engaged artists and this is your chance to interact in his live art piece.

An artist, illustrator, designer and animator, RhyanRhyan will be bringing his unique forms of visual expression to the party.

In association with Scratch Club and High Focus Records, the event promises to be emotive and powerful as it takes audiences on a personal journey exploring sexuality and race with an emphasis on self-expression and freedom.

With drink, dance and the tunes of DJ Sammy B-side set to create the same good vibes similar to his appearances with Public Enemy, DJ Premier, Skepta and Ghostface Killah, the party will be Free Radical’s way of saying goodbye to another year of championing brave, bold, and audacious activist art.

The Festival of Audacity is on in venues across central Birmingham between Thursday 18th and Saturday 20th July. For more details, click here. The Festival of Audacity after-party takes place at The Mill Digbeth from 8pm on Saturday 20th July. Anyone below 18 must be accompanied by someone 18+. Please be aware that there will be both soft drinks and alcoholic drinks available.

(Visited 768 times, 1 visits today)
https://www.iambirmingham.co.uk/2019/07/15/lowkey-lady-sanity-and-foka-wolf-to-perform-at-the-festival-of-audacity-afterparty/https://www.iambirmingham.co.uk/wp-content/uploads/2019/07/Rapper-Lowkey-in-Birmingham-17.04.19-by-Adam-Yosef-05-800x547.jpghttps://www.iambirmingham.co.uk/wp-content/uploads/2019/07/Rapper-Lowkey-in-Birmingham-17.04.19-by-Adam-Yosef-05-300x205.jpg2019-07-17T17:40:27+00:00Vimal KorpalArtsBrumFeedCommunityDanceEntertainmentEventsMusicNewsShowbizWhat's OnYoung people2019,after party,afterparty,Artists,Arts,Audacity,Birmingham,dance,Digbeth,DJ Sammy B-side,drinks,Festival,Festival of Audacity,Festival of Audactiy 2019,FOA,FOA 2019,Foka Wolf,FokaWolf,Free Radical,July 2019,Lady Sanity,Lowkey,Lowkey rapper,music,party,rapper,Rhyan Rhyan,RhyanRhyan,The Festival of AudacityRapper Lowkey will be headlining a huge afterparty of hip-hop and art activism to mark the end of Free Radical's Festival of Audacity this weekend, taking place at The Mill Digbeth. With a range of artists being headlined by award-winning hip-hop artist Lowkey, the event will celebrate the end of the...Vimal KorpalVimal Korpal[email protected]AuthorI Am Birmingham
« Bomb disposal unit descends on Small Heath house in Birmingham
Simmer Down Festival promises to heat up Birmingham for a day of free music and celebration »