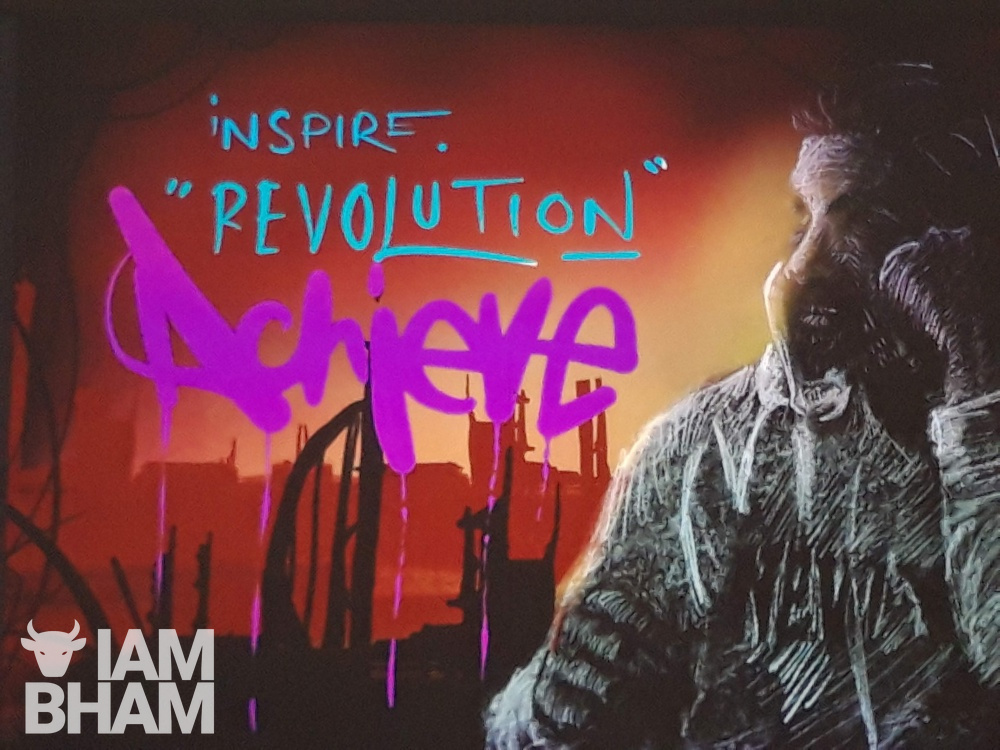 International street artist Mohammed ‘Aerosol’ Ali has always followed his own path through his art not only embracing the street art culture of graffiti, but also remaining faithful to his own Islamic belief and values, with his stunning, vibrant murals often incorporating silhouette figures and examples of Arabic text that he melds together to create pieces that have appeared across the globe.

And, just as schools were shutting down for the summer, Ali opens up his studio so young people would be able to see what it’s like in a working artist’s studio as he invited a class of primary school pupils from Billesley Primary School into his studios in what was once the Moseley School of Art.

A building that has certainly benefited from a new lick of paint and some much needed renovation of this Grade II listed building, thanks to a life-saving grant from the Heritage Lottery Fund. As you walk through the newly painted white walls of this imposing building, it’s certainly seems to be a building here to stay for some time. And, with artists like Mohammed Ali and his studio partner, portrait artist, Jonnie Turpie, it certainly has its supporters.

Walking into Ali and Turpie’s shared studio space is very relaxing, chilled event, even when the pupil arrived moments later. And, what followed was something akin to magic, taking my cue form the kids’ reactions when Ali and Turpie combined their talents and different artistic approaches to create an original digital artwork on ProCreate, a favourite amongst many an artist working both professionally or otherwise.

To these collected few, it seemed as though they were being allowed a rare glance behind the wizard’s curtain, as the work materialised right in front of their amazed eyes, projected onto one of the four white walls of this basement studio.

As well as watching these magicians casting their spells they got to have a go themselves, using water-based spray paint, stencils and paint pens. Being allowed to take the finished jam piece back with them was the icing on teen cake, and it’s a trip that memories are made of.

Yes, there are many organised  graffiti artists out there who visit schools, but not many who open their doors to show the blood and guts of a working artist’s studio. Although, I was amazed at how well organised Ali and Turpie’s space was. Or, was that for the kids? I should have asked.

Furthermore, when I think back to my own school days, it would be exactly a trip like this that I would remember for years to come, just as I will always remember my first time to Stratford-Upon-Avon and witnessing Shakespeare on stage for the first time.

But, if the current government continue down their current policy practices, such visits will be more and more infrequent for Schools like Billseley Primary School, which is situated in a less affluent area of Birmingham.

When once schools could subsidised such trips to keep costs down for less affluent individuals and their families, the cost in real terms of nearly a decade of educational cuts and marginalisation of the Arts in schools, and in particular in academies that can rip up the rule book and follow whatever curriculum they wish, means school trips are already becoming a thing of the past.

Even my own daughter’s school, in affluent Kings Heath, has cancelled the traditional last week trip to a theme park that they once subsidised. Although they’re not cutting back on trips I have to pay in full for, surprise, surprise.

With funding in the Arts also diminished in recent years – again thanks to a government insistent on cutting public spending – and many school dropping the Arts because it’s seen as a ‘third bucket’ choice when pupils come to chose their options in Year 9, we are in danger of a while generation of would be artists to follow another path, thanks to a social-engineering agenda that seems to want any working cals talent to wither on the vine and die.

Thanks to the likes of Mohammed Ali and John Turpie, however, there’s still hope yet.