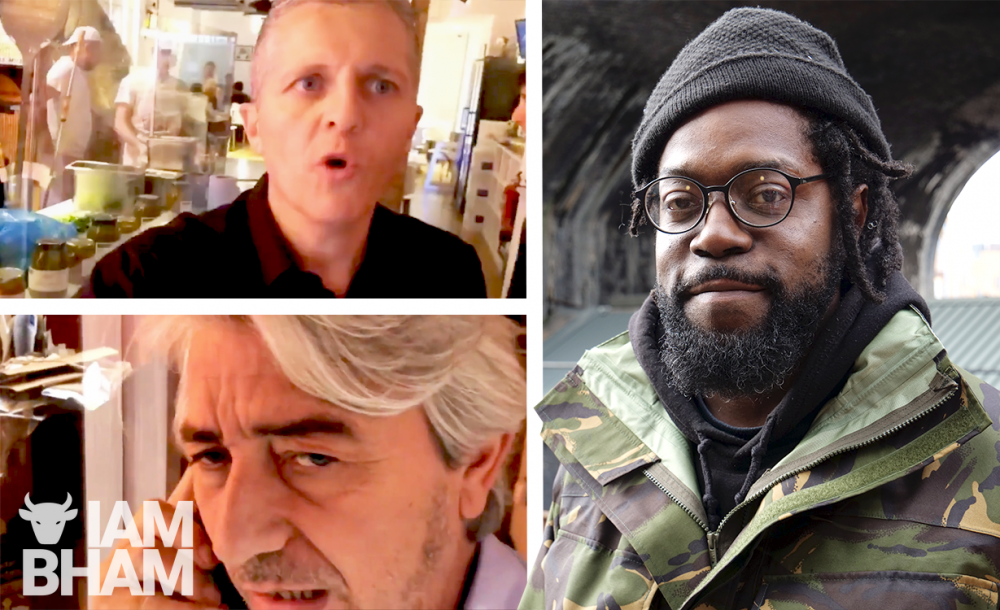 An Italian pizza restaurant in London has become embroiled in a race row with an award-winning jazz musician from Birmingham over claims he was mistreated and removed from the premises because of his appearance.

Soweto Kinch, winner of two MOBO Awards, was asked to leave from L’Antica Pizzeria da Michele in London’s Baker Street on Friday afternoon before being forced out, in an incident captured on video by the artist and by CCTV at the venue, resulting in claims and counterclaims citing “aggressive” behaviour.

Sharing the video on Twitter, Kinch said: “I’m genuinely at a loss to explain this one… just wanted to order a pizza. Waitress rudely ignores me. Nobody offered to serve me. When I filmed this unbelievable behaviour, they attacked my phone and physically ejected me from the restaurant.”

In the video, a member of staff is shown angrily knocking Kinch’s phone out of his hand, but a spokesman for the restaurant denied the claims and said Kinch had been acting unacceptable to staff.

Nobody offered to serve me.

When I filmed this unbelievable behaviour, they attacked my phone and physically ejected me from the restaurant #AnticaPizzeria pic.twitter.com/cpcgX12CED

In a more detailed post on Facebook, 41-year-old Kinch explains he had been to the restaurant with white friends twice before without incident, but says staff refused to serve him when he turned up on his own.

He claims the altercation started after he was ignored by a waitress at the front of the restaurant, and that when he called over other staff to ask to be seated, they also failed to accommodate him. He said he had been treated with ‘contempt’ from the moment he walked into the establishment.

“As soon as I walked into the restaurant the waitress cut me an evil stare. I said hello, and got no response but a more contemptuous look. I just looked back, thinking do I want to spend money here? I turned around left the restaurant before thinking, ignore her behaviour and order the pizza from a non-rude person.

“A colleague (who bless was the only one attempting to diffuse the problem) started to explain, ‘Sorry she doesn’t speak English… she thought you just wanted to use the toilet’. I found that offensive, as she’s assumed I’m incapable of being a customer, but must be an incontinent vagrant. As I explain the fact that this is rude, a third member of staff joins the dispute.

“I’m still asking for a menu! Nobody responds with a menu, I started filming as I couldn’t believe this was happening. Then as I’m getting the video and social media handle, he slaps the phone from my hand. Again the conciliatory colleague steps between me and the phone slapper.

“I lose my cool, about to pick up a stool in a rage. I calm myself, realising this is another case of being baiting into violence – they wanted an excuse to call the police. The manager comes, doesn’t utter a word, doesn’t listen to me at all. Whilst on the phone he shuts me out of the restaurant, back into the rain. The entire episode from start to finish is a disgrace.

“Instead of handling this misunderstanding in a professional manner. They’ve spent two days fabricating stories and trying to discredit me.”

The restaurant has responded to the claims of excessive force and racism by accusing Mr Kinch of being “extremely unfriendly to our staff” and of “starting throwing chairs,” a charge he denies. In a series of posts shared to Instagram Stories, the restaurant added it treats “everyone in the same way, no matter which race or religion.”

The business also took to its Twitter account for the first time ever to respond to the claims, stating: “Please see the full response and videos on our Instagram stories. To be honest it goes beyond our standards to respond in this way, but unfortunately we have to show this, cause we feel accused for something that is not true. The person you see in our Instagram stories accused.”

The restaurant’s tweets relating to the incident are bolstered by several anonymous new Twitter users who have shared stills from CCTV footage that could have only come from the restaurant team itself. In the stills and in the footage, Kinch is seen moving a chair but not throwing it, as the restaurant claims.

The CCTV footage shared by the restaurant also fails to show a staff member attacking Kinch’s phone, which can clearly be seen in his filmed video.

Kinch has responded by accusing the restaurant of manipulating the truth by editing the CCTV footage to omit key details.

“They’ve doctored CCTV footage to remove the part where a member of staff slaps my phone out of my hand. They’ve implied I was ‘high’, left and returned to the restaurant for no reason. They’ve created fake Twitter profiles to dispute my account. Posted a fake story from a ‘witness’ who said I was intimidating her that night…. even though it happened at 4.15pm,” he wrote on Facebook.

“The truth is that since the moment that he walked in he had a rude behaviour because we didn’t serve him immediately and he started to insult the receptionist for that, and later also the waiters. So we asked the person to leave the premises.

“We are sorry if our staff appears upset due unexpected, unprovoked and impolite behaviour. We do our best every day to make each customer happy and serve as quick as possible.”

Shortly after the incident, another customer believed to have been at the venue at the same time – identified only as Tanya B – wrote about the confrontation on review site TripAdvisor:

“Whilst sitting eating my food, I witnessed a black gentleman enter the restaurant. He was completely ignored by the waitress, so he went to the counter and asked for some service, politely. The staff member hit the man’s phone from his hand to prevent him from recording their behaviour, and then the manager physically forced him out of the shop and slammed the door into his face. I can’t believe this behaviour exists in this day and age. Vile, blatantly racist behaviour, I will never return!”

Since the initial video has gone viral on Twitter, Soweto Kinch has been flooded with support from across the political and entertainment sphere including award-winning musician and film composer Nitin Sawhney who wrote:

“Wtf? Wow. So sorry that happened to you, mate! Looks awful… what the hell is going on these days?”

“You mean the customer addressed as “coloured man” on a video by a staff member of the restaurant? Not surprised you have to ask if it’s Soweto or not. He’s probably just another “coloured man” to you. How did you get the CCTV footage? Ah. You work there – at the racist restaurant.”

Solidarity for Kinch has also come from sports writer Musa Okwonga, community activist Sasha Josette and political campaigner Salma Yaqoob, while others have called for a boycott of the restaurant situated outside Marylebone Station.

Reflecting on the incident, Kinch stated:

“The response of this restaurant is disappointing but not surprising. All of this drama could have been averted if they had simply apologised and asked me if I would like to order a pizza.

“This is sadly far from the first time I’ve posted about these experiences. There are far more egregious examples of racial violence, and in the grand scale of things not getting a pizza ain’t gonna inhibit my quality of life much… But again it forces me to clarify why it’s important to make these stories public.”

The London-born but Birmingham based musician added:

“Perhaps the next time you see a black man being aggressively manhandled, or visibly upset you’ll ask more questions rather than passing judgement.

“So again this message is to all those who’ve experienced the same or similar: You’re not insane; you’re not making it up – some people are actually looking for a fight with someone the can take life’s frustrations out on; they will try and twist whatever happens to suit a racist narrative; the more they try to expose you, the more they will expose themselves; keep cool and don’t internalise their hatred.

“Note, at no point in the social media post did I directly describe their actions as ‘racist’. Their behaviour tells its own story. If when I’d asked to speak to the manager, he actually would have heard my complaint instead of coldly shutting the door on me, we wouldn’t be here.”

Soweto Kinch has confirmed he has reported the incident to the police.