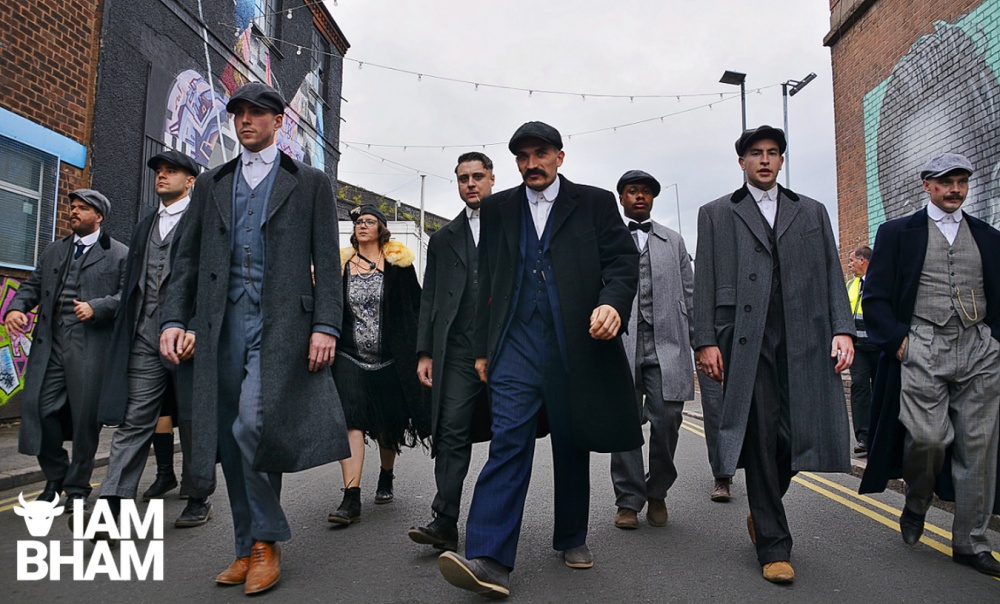 This was the launch of the first-ever Legitimate Peaky Blinders Festival in Digbeth, Birmingham. The backstreets of Digbeth welcomed the infamous Peaky Blinders and a host of musicians, dancers, artists, street food vendors, merchandise stallholders, barbers, and fashion retailers.

This was the inaugural official gathering of Peaky Blinders fans and music enthusiasts, and everyone in between. The people immersed themselves in the festivities and were transported to Birmingham in the 1920s.

Sam Neill said: “This was actually a really fun way to spend me (sic) birthday.

“So interesting to see the crowd – mostly dressed as Peakys. And a few dressed as cops (who didn’t recognise me). People just LOVE this show – they own it – it belongs to them. Amazing to see such devotion.”

Atmospheric ballet shows from Rambert took place across the day on the Arena Stage, captivating and taking the audience on a beautifully choreographed journey down the 1920s world of the Peaky Blinders.

The company choreographed a hypnotic dance performance with a stunning rework of Nick Cave’s ‘Red Right Hand’ by Raven.

The performance included the historically accurate Rambert show of ‘Swan Lake’ in Birmingham in the 1920s, which show creator Steven Knight has adapted for Season 5.

“The fact that they capture scenes without words; people walking down the street, a carriage, the smoke, people working in the mill and that’s the movement part – we just expanded it and made a dance out of it.

“But that’s what’s beautiful about the show – it has movement without words in it.”

In the afternoon there was a showcase of British inspired tailoring from Garrison Tailors, Steven Knight’s luxury menswear brand.

The collection epitomises the spirit of Peaky Blinders and contemporary style and comprised of items including their new for 2019 Union Cut range and Shelby Tweed Waistcoat, Arthur and Thomas Tweed Suits, from their Made in Britain range.

Their more casual range of Henley T-shirts was also presented.

The show was rounded off with a special thanks from the man himself, Steven Knight.

The event then moved from fashion to music with special guests performing on the Main Stage.

Anna Calvi commented: “The audience has been amazing and it’s really nice to see everyone dressed up looking the part, so many strangers talking to each other because they’re all passionate about the same thing.”

The festival had several stages spread across the Custard Factory complex.

On the Spoken Word Stage there were performances by poets Aliyah Hasinar, Ren, Casey Bailey, and Hussain Manawar.

Liam Gallagher, who was the Legitimate Peaky Blinders’ ‘secret’ special guest, arrived to delight fans on the Main Stage for his slot in the early evening. He performed to an appreciative and packed out crowd.

Liam performed songs from his new album ‘Why Me? Why Not’ as well as sending the crowd into a frenzy for Oasis hits ‘Columbia’ and ‘Supersonic’.

He wore a peaked cap during his performance as a nod to the world of the Peaky Blinders.

The singer made it a family affair by bringing his sons Lennon and Gene, daughter Molly, brother Paul and girlfriend Debbie to the gig.

The immersive theatre by Dank Parish and Martin Coat, one of the creative directors of Boomtown, brought the festival to a standstill with their hour long performance through the streets of Digbeth.

The performers staged several exciting action set pieces throughout both days of the festival which included arguments between the Shelby gang and the Lee family that culminated with a street brawl.

The feud continued from Floodgate Street and erupted into the gypsy caravan site.

The action and drama took place just a stone’s throw from where the first ever Peaky Blinder activity took place.

The actors brought excitement and tension as the feud was finally brought to a thrilling climax inside a boxing ring which was situated in an indoor bar area.

The bloodletting was very dramatic and looked extremely authentic.

This pulsating bare-knuckle fist fight actually took place inside the Shelby boxing ring, which was used in Series 4 of the show itself.

Some of the interactions between the actors and the fans in attendance at the festival were very sweet.

There was a truly memorable moment when one of the cabaret dancers went over to an elderly gentleman in a wheelchair and gave him a cheeky private dance followed by a kiss.

This simple yet incredibly human act melted the hearts of the crowd and people were smiling from ear to ear.

The set designers took care in presenting authentic musical instruments, outfits, caravans, and other materials to give a sense of authenticity when the actors presented their interludes to the audience.

John Empson, festival promoter, said: “The first day of the inaugural Legitimate Peaky Blinders festival was a resounding success! The crowd embraced the day dressed in incredible Peaky outfits, and we had packed out venues around the site with the audience enjoying everything from the music, ballet, theatre, fashion shows, Q&A talks and spoken word.

“Digbeth proved to be the perfect location, the weather was incredible and the crowd loved it.

“It’s been a perfect weekend we couldn’t have asked for better reception for the first-ever festival.”

From the stand out immersive theatre, five stages of music, fashion shows and spoken word, fans and stars alike were swept up into the dazzling world of the Shelby family.

There were moments of spontaneity that really appealed to the fans of the show. Some members of the cast walked through the festival area and mingled with the fans and posed for selfies.

Punk rock duo Slaves brought their anarchic music to the festival in the afternoon.

Both stomped and jumped around topless, and both were full of fire and brimstone as they belted out their music across the vast open space of the Main Stage.

Theatre company Dank Parish took the immersive experience to another level on the final day of the festival.

Highlights included betting on hot-blooded choreographed boxing matches, an impromptu staged bare-knuckle fight that exploded out of the ring into the pit, and then live music on the streets with banjos, accordion and harmonica.

The performances were immersive and the audience took joy in interacting with the actors around the various spaces of the festival.

Sports, music, games, and even politics were mixed into the festival to keep the atmosphere flowing as the day progressed towards evening.

A Women’s Protest march erupted with actresses dressed up as suffragettes walking down Floodgate Street and waving placards and creating barricades.

Some members of the audience stepped across the barricades and joined arms with the protestors to show their support for Women’s Rights.

Becky Brown, Dank Parish’s Creative Producer, said: “It was really important to us, in the current climate, to represent the struggle for equality. Whilst the shape of that has changed in the present day, it became apparent during this scene last night, how much the sentiment remains.”

The actors choreographed the violent and raw world of the Peaky Blinders inside the ring and balanced it with comedy on the streets with the audience.

The interplay and immersion really connected with the visitors.

Martin Coat, Theatre Director of Dank Parish, said: “We are legitimately in Peaky territory here. You can feel the history and because of that, it doesn’t take much for our characters to believe in themselves and in the world that they’ve created.

“It’s not like when you’re on stage and you’ve got the fourth wall – here you’re immersed in something that feels completely real. It’s amazing.”

The whimsical Carousel stage saw swing bands from around the world play jazzy versions of hit songs and original music entirely fitting with the theme of the weekend.

The singers and dancers encouraged punters to dance and enjoy the show.

The stage was lit up in beautiful golden light which contrasted with the concrete and industrial landscape of Digbeth.

The festival brought music and entertainment and turned the area into an open theatre.

Floodgate Street was closed off at both ends and the area transformed into a Peaky Blinders wonderland with actors interacting with fans and posing for photographs throughout both days of the festival.

The dancers around the Carousel Stage were absolutely tireless as they danced in high heels and made it look so effortless and classy. They performed across both days of the festival and showed no sign of tiring with constant smiles on their faces which lit up the audience.

One section of the street was turned into the ‘Digbeth Fayre’ featuring gypsy caravans, musicians, fortune tellers, and jugglers.

The original sign of The Garrison Tavern, where the Peaky Blinders often held court, was also on show during the festival.

The original marble plinth from 1809 which once stood underneath Admiral Lord Nelson’s statue in the Bullring was also on display.

This plinth was lost in during the rebuilding of the city centre in 1961 and later discovered by Steven Knight’s father in a coal shed when he worked as a blacksmith for Birmingham Corporation.

The plinth now rests in the Knight family garden.

Anthony Byrne, Series 5 director, introduced show creator and writer Steven Knight to the Spoken Word stage as the festival drew to a close.

Knight delivered a moving reading from his own mother’s journal which detailed her childhood growing up in the Small Heath area of Birmingham.

Memories included catching a tram from Coventry Road and going all the way to the Lickey Hills, and coming home late to a household where life was hard yet the family endured and survived the daily hardships.

“We’ll be back next year – bigger and better with the most amazing music acts around.

“I think this place, Digbeth, it’s almost as if someone built a film set.

“We’ve loved it, the cast has loved it, and it’s been brilliant, thanks for everything.”