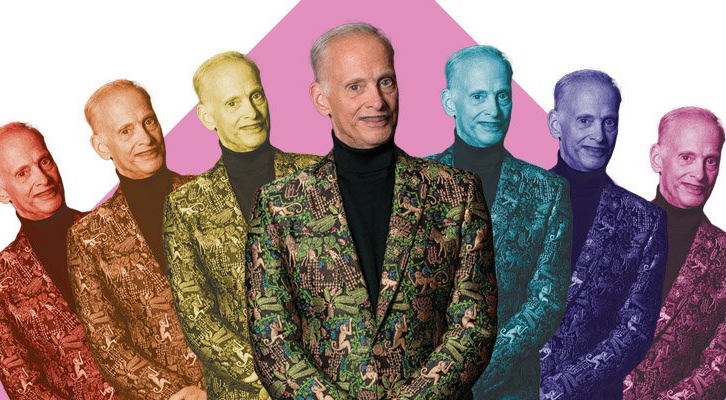 One of the most influential film directors of the past 50 years, John Waters, arrived in Birmingham today for his headline appearance at the city’s annual Shout Festival.

The cultural icon made his first ever visit to the Brum, exploring Southside before taking to the stage at the Hippodrome, hosting his one-man show ‘This Filthy World‘.

Celebrating his career influences in his trademark hilarious and filthy fashion, Hairspray director Waters left audiences amused and wanting more as he performed in Birmingham for the first time. Following the show, the writer, actor and comedian went off to the Electric Cinema in Station Street to introduce a very late screening of his last theatrical film, A Dirty Shame, a satirical sex comedy  released back in 2004.

Commonly referred to as the “Pope of trash”, John rose to fame in the 1970s for his transgressive cult films – namely Multiple Maniacs and Pink Flamingos – before cementing his legacy as an icon of the silver screen, writing and directing Hairspray, which was later turned into a Broadway musical and performed several times on the Hippodrome stage.

Openly gay and an avid supporter of gay rights, Waters graced Birmingham’s Gay Quarter to top the bill at this year’s SHOUT extravaganza, a “Festival of Queer Arts and Culture”.

Launched earlier this month, the West Midlands arts fest is on until 17th November, with events including performances and appearances from Lady Leshurr, Travis Alabanza, Jaivant Patel and Nathaniel Hall.

As part of the nearly fortnight-long festivities, a special Vogue Ball will be held at the Birmingham Hippodrome on Friday (15 November), inspired by the New York vogue scene of the 1980s and 1990s, famously documented in Paris is Burning and more recently in FX drama POSE.

Marking a decade since its inception, this year’s SHOUT festival is pushing the boundaries while aiming to be as inclusive as possible. According to organisers:

“SHOUT grew out of a desire to celebrate and promote the diversity of Birmingham’s LGBT cultural community. Launching in 2009, SHOUT Festival – a project of Birmingham LGBT – was created as a direct response to a significant lack of representation for of Lesbian, Gay, Bisexual, Trans, and Queer in Birmingham’s arts venues.

“Each year since we have grown and changed building in ambition and taking on new challenges, we’ve been a film festival and an arts festival, we’ve worked in different venues, we’ve started new conversations and taken on new shapes and ideas. In recent years we have developed a robust and dynamic annual festival taking place for 10 days each November.

“In 2017, we introduced the first Birmingham LGBT History to coincide with LGBT History Month in the year of the 50th anniversary of the Sexual Offence Act. We are now well into our ninth festival year, and a much anticipated and firmly fixed highlight in the city’s cultural calendar.

“We are so proud to represent and platform the voices and experiences of queer people in Birmingham and the Midlands.

“We look forward to continuing to grow in the future, we remain dedicated commitment to furthering Queer Arts and Culture in the region. Our activity will focus on celebrating queer identity in all its intersections, creating new opportunities for Queer Artists in the midlands, and platforming the voices and experiences people in Birmingham and the wider midlands to audiences locally, nationally, and internationally.”

In 2017, the SHOUT Festival successfully joined the Arts Council England’s National Portfolio for 2018-2022.

The SHOUT Festival is on from 5th – 17th November at venues across central Birmingham. For more information, visit: www.shoutfestival.co.uk.