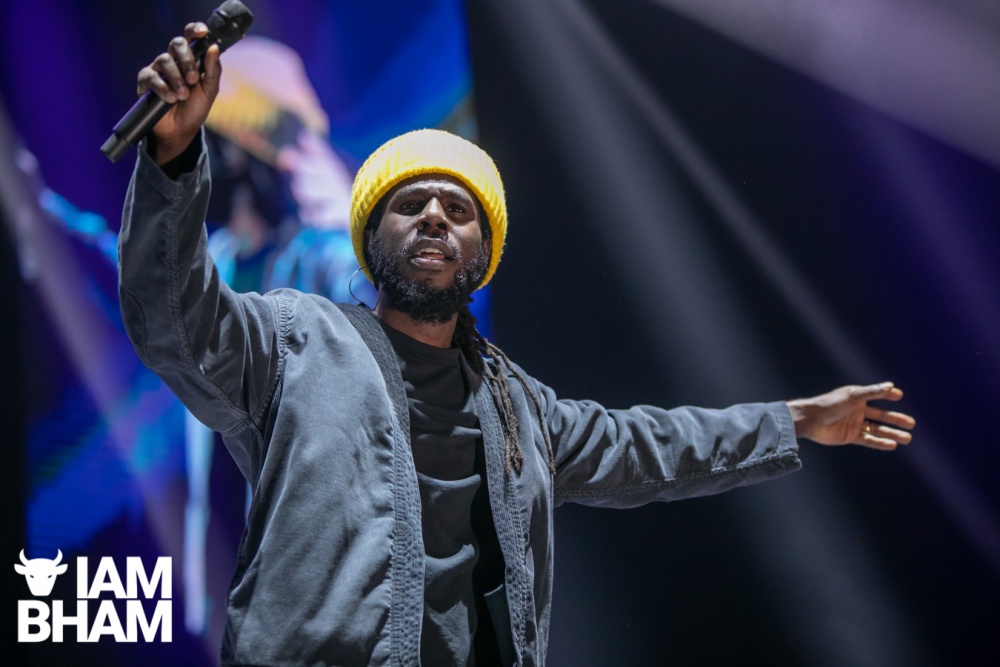 One of the most anticipated reggae music concerts took place at the Arena Birmingham this week as reggae superstars Chronixx and Koffee left the crowd feeling lifted as they joined forces for a rare but special show.

For anyone who likes reggae music, it was impossible to not know that Koffee and Chronixx were performing live on stage together, for one of only a couple times this has happened in the UK, and they chose Birmingham for this highly anticipated performance on November 10.

The music of reggae that was born out of the small country of Jamaica has always been synonymous with rasta. Any number of early influential reggae artists will have been rastas not only physically but in their way of life. Conscious lyrics an “ital” lifestyle, and use of marihuana to gain a different level of spirituality. All of these made sure that when you thought of reggae you also thought of rasta, peace and consciousness. It was music that lifted you as a person and made you want to lift others around you.

Fast forward to the 90’s and something shifted quickly and unrecognisably. The beats changed, the humility faded, reggae became dancehall, ital disappeared and the scene became about being brash, sexually explicit and extrovert.

A new fashion wave gripped the scene were it became about knowing the latest dances, and who had the more sexual prowess. Lyrics about justice or equality were replaced with lyrics about whining  and sexual explicitness (slackness as referred to in the dancehall circle). It lost its pride of blackness and locs, in favour of skin bleaching and wigs. Just as it seemed reggae, thats is real reggae, was a genre relegated to the elders, a time long gone, Chronixx and now Koffee exploded onto the scene.

The Arena held an 8,000 strong crowd who had come out to see these two legends to be. In terms of reggae music, in the UK; this was history in the making.

A crowd of that size, for two Jamaican reggae artists, at the Arena. In terms of reggae music in Birmingham, many people will still talk about whether or not they attended the Bob Marley concerts in Birmingham.

This may just have been another “where were you when” moment in Birmingham reggae history.

Chronixx is the Jamaican sensation that has been hailed as one of the modern day saviours on roots reggae or conscious reggae music in contrast to the wave of new school dancehall artists that the reggae market is littered with. In contrast to much of dancehall, Chronixx brings a different vibe with his love, spirituality and conscious lyrics.

He has ignited a torch fuelling the path for a new wave of roots and culture lovers, some would say ‘real reggae’ after a period in reggae that seemed like it would be lost to bravado of dancehall forever.

This was mirrored by the crowd at the concert, there were people from teens to seventies, probably people that listened to waves of earlier reggae artists over the decades such as Peter Tosh, Dennis Brown and Bob Marley; showing his appeal to such a wide range of fans.

The crowd was diverse in so many ways, mothers came with their daughters, couples came, groups of friends came, men came alone, women came alone. The front row was littered with people from various backgrounds also, who had queued for hours to get a prime position.

Chronixx sets himself apart from dancehall in everyway. That is not to say there is anything ‘wrong’ with dancehall, but you know when you are going o a Chronixx concert, it is going to be something different. Chronixx took to stage in an understated outfit, that would be expected from reggae artist, with his locs covered by a bright yellow beanie hat. Dyed hair  and outrageous outfits were nowhere to be seen.

The music of Chronixx

His performance remained mellow throughout, his melodic tone inviting the  crowd to sing along to every tune, and encourage a sea of mobile phone lights to wave from side to side from the audience.

With songs like “Skanking Sweet” declaring that “everybody wanna feel irie” and “yuh nuh see how reggae music sweet?” it would have been difficult to not enjoy the concert and feel good about everything for that moment.

His love for the reggae music was obvious, on stage he seemed to be in a zone all of his own, we do not need to delve too deeply into his catalogue to understand how his love for the art drives the music. One of his anthems “Likes” enlightens his fans that he does not do what he does for fame i.e. the “likes” but through love of the music. He seems to really enjoy performing and his own music.

“Black is beautiful” for many stands as a direct contrast to some of the European standards of beauty flooding dancehall, where prominent artist like Vybes Kartel have noticeably bleached their skin because it is considered by many more aesthetically pleasing. Songs such as this however, encourage people who face this daily diatribe to feel positive about and love themselves.

Even at the young age of 24 Chronixx already has a vast catalogue behind him, as such didn’t get to sing all of his classics before his stage time came to an end, leaving fans definitely wanting more.

As an even younger artist Koffee has been described as “likkle but talawah” a Jamaican phrase to describe someone who is small but mighty.  At 19 she has joined the new generation of artists revising roots reggae and had made a huge impact not only in Jamaica but also worldwide, with 84 Million views on YouTube for Toast, 722 Million followers on Instagram with zero posts and not following anyone back and some of the most obscure and diverse hashtags for posts about her.

A most obscure indication of her popularity was when holidaying on a quiet island in Thailand, while sitting in a small restaurant listening to cover songs sung but the resident Thai entertainment the popular chords signalling “Toast” started, we spent the next few minutes enteratained by the song in a Thai Jamaican accent. It was the last place I expected to hear Koffee.

2019 has been a great year for her, among winning many awards she also played at festivals like Glastonbury and Rebel Salute, accolades not everyone gets to experience in their career, much less the beginning of it.

She is still new to performing in the UK, she seemed a little more uncomfortable with holding a stage alone. She took to the stage in a red tracksuit, performing the first number of songs with her hood up. As she got further into her set the hood came down almost as an indication of her warming into the performance.

The staging was simple with her name  or  phrase illuminated during some songs; such as “Gratitude is a must” the recognisable line from arguably her most popular hit. Her apparent stage shyness seemed to  have no bearing on the crowd enjoying the concert; Facebook was littered with positive comments, lives and photos  after the event. She still has so much more space to grow, this will be an exciting space to watch.