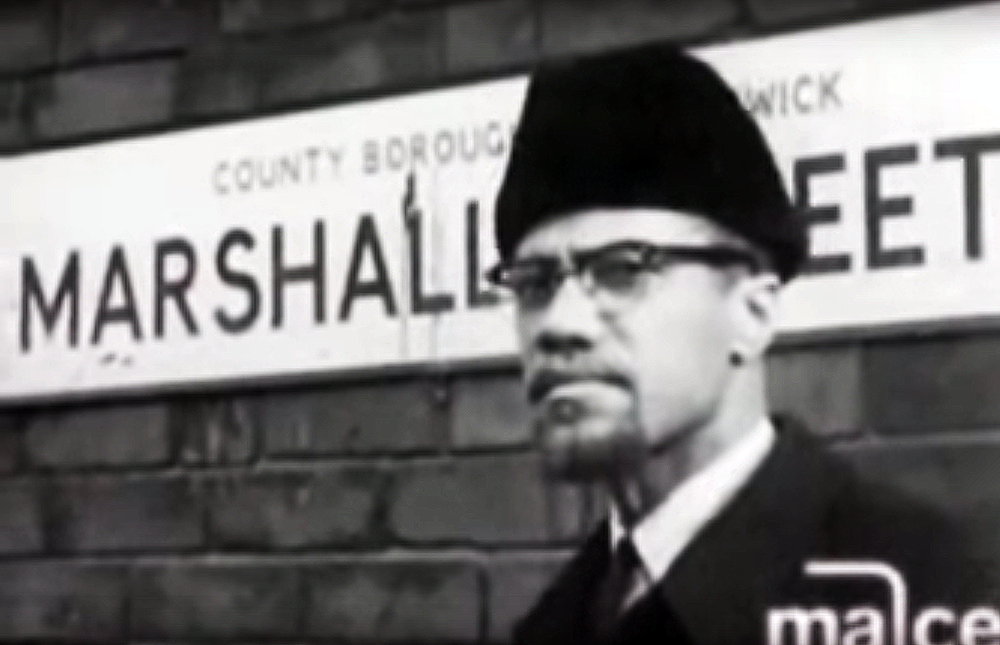 Malcolm X in Marshall Street in Smethwick in 1965

On this day in 1965, the civil rights campaigner Malcolm X visited Birmingham and spoke to local people in Smethwick in neighbouring Sandwell.

On 12 February 1965, Malcolm X – El-Hajj Malik El-Shabazz – came on a visit of solidarity to Birmingham after accepting an invite from Avtar Singh Jouhl who was the secretary of the Indian Workers’ Association. Today marks 55 years since the historic visit.

Singh asked Malcolm X to speak at Birmingham University and to visit Smethwick following racial tensions in the area.

Conservative MP Peter Griffiths had won the Smethwick seat in 1964 with the slogan “If you want a nigger for a neighbour, vote Labour.”

The Labour incumbent, shadow home secretary Patrick Gordon Walker, lost his seat in one of the most racist election campaigns in British history. When the defeated Walker left Smethwick Town Hall after the vote count the Conservative supporters screamed at him:

Racial tensions were running high and the people polarised, and Smethwick was seen as a real hotbed of racism. Some bars and pubs had signs displayed in windows stating ‘No Coloureds’.

Marshall Street in Smethwick was especially problematic with residents lobbying the council to buy up empty houses along the street and make them available only to white families.

The Conservative Council agreed to the demands of the racists to stop non-white people from moving in. Black and Asian families were prevented from purchasing or renting properties on Marshall Street and the situation carried on for several years.

Malcolm X visited Marshall Street and a local school in February 1965 and told the few press in attendance that he was “disturbed by reports that coloured people in Smethwick are being treated badly”.

He added: “I was in Birmingham, Alabama, the other day. This will give me a chance to see if Birmingham, England, is any different.”

A BBC camera crew followed Malcolm X during his visit to Smethwick and filmed the rare event but the footage was never aired at the time.

Paul Magson said: “I am always shocked that many local people don’t know about this important event in our recent history.

“The politics and issues of the time have never been more relevant as we grapple with hate crime, Brexit, ‘fake news’ and a whirlwind of politics and I hope the play will open up real conversations in local communities.”

A blue plaque commemorating the visit was installed at Marshall Street in 2012 by the Nubian Jak Community Trust, in association with Sandwell MBC, Recognize Black Heritage & Culture, African Caribbean Self Help Organisation and the Indian Workers’ Association (GB).

Sadly, nine days after his visit to Birmingham, Malcom X was assassinated in New York while giving a speech on 21st February 1965.