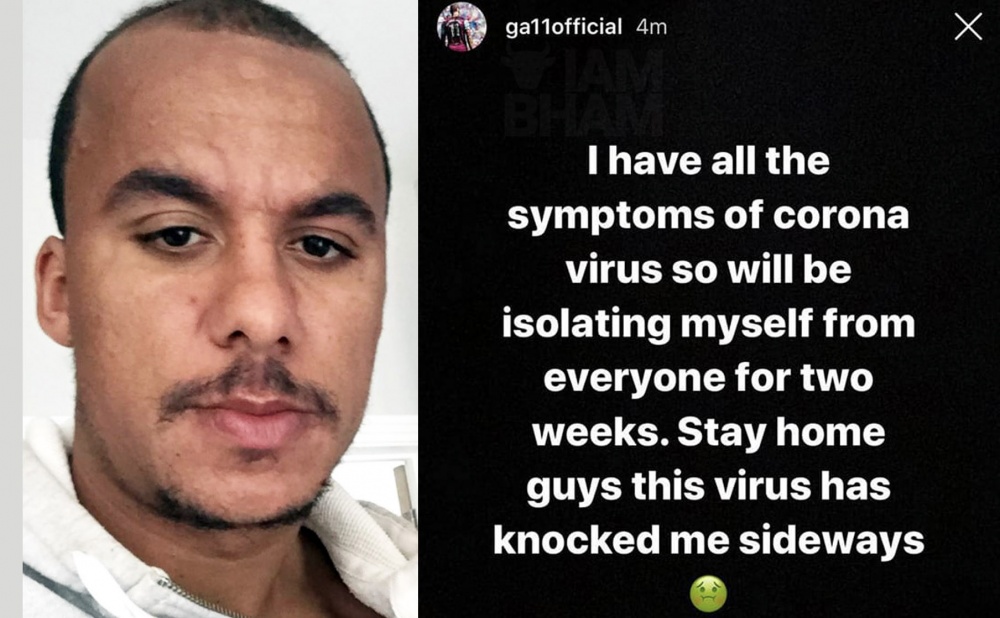 Former Aston Villa footballer Gabriel Agbonlahor has announced he has symptoms of coronavirus and will be self-isolating.

In the last hour, the English former professional footballer took to his 99,000 Instagram followers to state:

“I have all the symptoms of coronavirus so will be self isolating myself from everyone for two weeks. Stay home guys, this virus has knocked me sideways.”

It is not known if the 33-year-old former Birmingham-born striker has been officially diagnosed or has self-diagnosed the symptoms, having not as yet made any further statement.

Agbonlahor made his revelation within the same hour as Idris Elba announced that he had tested positive for COVID-19 and was self-isolating.

Sharing a video on Twitter to his 2.7 million followers, Elba wrote:

“This morning I tested positive for Covid 19. I feel ok, I have no symptoms so far but have been isolated since I found out about my possible exposure to the virus. Stay home people and be pragmatic. I will keep you updated on how I’m doing. No panic.”

The news also comes a five days after Hollywood veteran actor Tom Hanks – an avid Aston Villa van – and his wife Rita Wilson also announced they had tested positive for the virus while in Australia, and were self-isolating as a result. In their most recent update, Hanks said the couple would remain in isolation “for the next ten days”.

Who is Gabriel Agbonlahor?

Gabriel Agbonlahor came through the youth ranks at local club Aston Villa, signing a two-year professional contract at the club in June 2005. Later that year, he was loaned to Championship club Watford, where he made his senior debut, replacing Trevor Benjamin at half time in a 1–3 defeat away to Coventry City.

A product of Aston Villa’s Academy, the Brummie footballer made his first-team debut in 2006 following loans to Football League clubs Watford and Sheffield Wednesday.

Since then, he made over 300 Premier League appearances for the club. With 73 goals, he is Aston Villa’s all-time leading Premier League goalscorer, having scored in 11 consecutive league seasons. Formerly a regular with the England under-21s, Agbonlahor made his senior international debut for England in 2008 and earned three caps.

Agbonlahor made six appearances for Villa during 2017–18, and left the club at the end of the season after his contract was not renewed, ending a 17-year association with his hometown club.

During his career at Villa, he has scored 86 times in 291 appearances and is the club’s record Premier League scorer with 75 goals. He retired from playing on 27 March 2019 at the age of 32.

Fifty-three people have since died in the UK from the virus, with the UK government’s chief medical adviser suggesting people who show “even minor” signs of respiratory tract infections or a fever could soon be told to self-isolate in an effort to tackle the outbreak.

The government is stepping up its coronavirus response, in order to delay its spread, including calling on people to stay away from social spaces, unnecessary travel; and work from home where required.

Large events have not officially been banned but guidance suggests they be avoided, as the government announces there will be no official support for mass gatherings. Scores of events up and down the country have already been cancelled or postponed.

Members of the public have been urged not to panic-buy as retailers reassure customers they have healthy supply chains, but panic buying could deprive the most vulnerable from essential sanitary items and medication.

Prime Minister Boris Johnson and his chief medical advisers have said most British people should expect social disruption as the projected rate of spread accelerates. With many European neighbours including Italy and Spain enforcing more serious “lockdown” measures and curfews, the UK government is as yet not closing schools – despite calls from teachers and parents to do so. However, the PM has not ruled out the action in the near future.

The official UK death toll presently sits at thirty-five, with some speculation that it may be higher, at thirty-seven. The World Health Organisation (WHO) is encouraging more tests on individuals while the UK government is no longer committing to mass testing.

(Visited 1,935 times, 1 visits today)
https://www.iambirmingham.co.uk/2020/03/16/former-avfc-striker-gabriel-agbonlahor-announces-coronavirus-symptoms/https://www.iambirmingham.co.uk/wp-content/uploads/2020/03/Gabriel-Agbonlahor-Instagram-photo-coronavirus-1-800x494.jpghttps://www.iambirmingham.co.uk/wp-content/uploads/2020/03/Gabriel-Agbonlahor-Instagram-photo-coronavirus-1-300x185.jpg2020-04-08T20:09:44+00:00Staff ReporterCoronavirusHealthNewsSportsAston Villa,Aston Villa FC,AVFC,Birmingham,Brummie,coronavirus,coronavirus symptoms,COVID-19,England,football,footballer,Gabby Agbonlahor,Gabriel Agbonlahor,I Am Birmingham,Instagram,striker,VillaFormer Aston Villa footballer Gabriel Agbonlahor has announced he has symptoms of coronavirus and will be self-isolating. In the last hour, the English former professional footballer took to his 99,000 Instagram followers to state: 'I have all the symptoms of coronavirus so will be self isolating myself from everyone for two weeks. Stay home...Staff ReporterStaff Reporter[email protected]AdministratorI Am Birmingham
« Idris Elba tests positive for coronavirus and goes into self-isolation
Two teenagers arrested for the shooting of Abdul Wahid Xasan »