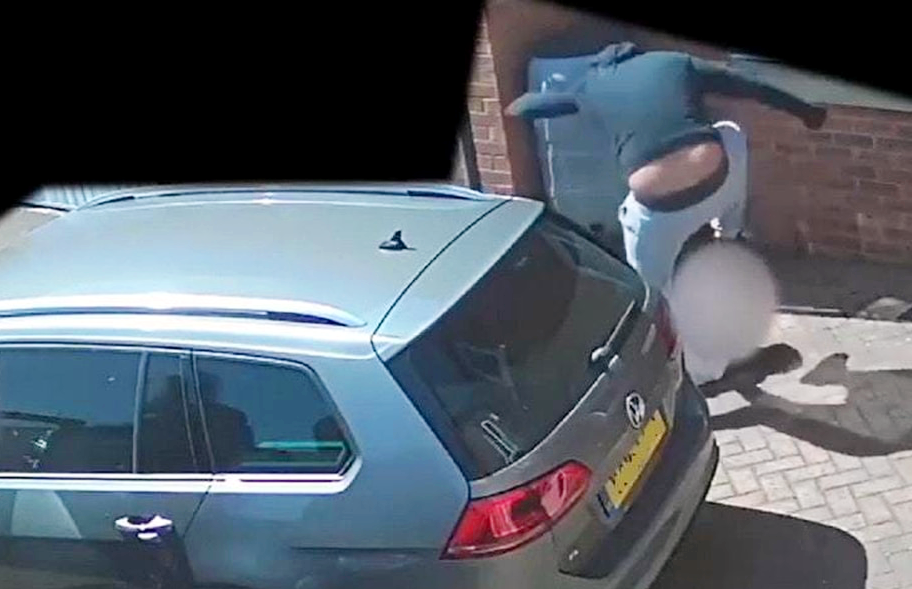 Police have released a shocking CCTV footage in the hope of catching a ruthless carjacking gang who violently attacked a man while his pregnant wife watched helplessly in Kings Norton, Birmingham.

The vicious robbery was carried out “using an extreme level of violence” against an unsuspecting couple said the police. The disturbing attack took place on the afternoon of Thursday 28 May on the driveway of the couple’s residence in the Monyhull Grange area of Kings Norton, Birmingham.

Four men arrived outside the couple’s home at around 2:40pm in a white Renault Clio as the male victim stood next to his VW Golf R estate while his pregnant wife sat in the passenger seat inside the car.

The 44-year-old man was punched and kicked and forced to hand over his car keys.

Despite handing over the keys, the shocking CCTV footage shows the victim being attacked until he collapses to the floor where his attacker mercilessly stomps and kicks him on the ground.

The victim’s wife was forced out of the car, and two of the attackers got in and drove off.

The third member of the gang got into the Clio which was then driven away by a fourth man, in convoy with the VW.

The victim of this savage crime was found to be covered in injuries when doctors examined him in hospital.

His body was pockmarked with bruises, with lacerations to his head and ears ears which needed multiple stitches, and a broken finger.

His wife, aged 39, was left traumatized by the “appalling” incident and was found to be suffering from high blood pressure which needed medical attention due to her pregnancy.

Investigator Jamie Bunting, from CID, said: “This was an appalling attack on a pregnant woman and her husband, using an extreme level of violence.

“The couple have asked us to release this CCTV, while we’re conscious it is shocking, we hope it will help us identify those responsible.

“If you witnessed what happened or know who these people are, do the right thing and get in touch with us.

“We’ve already spoken to several witnesses, but there would have been lots of people out on walks at the time of the offence. We would like to hear from people who may have seen the cars at around this time, or who may have CCTV that we have not yet recovered.”

No arrests have yet been made. Neither the Clio, which had cloned plates reading YT64 VSX and a distinctive panoramic sunroof, or the VW, registration VA16 LFJ, have been found.

Police have issued descriptions of the four thugs who conducted this violent robbery.

The third man in the gang was described as white. He wore a black hoodie, grey joggers and black trainers.

The fourth man, who drove the Clio, was also white and he wore a blue puffa jacket.

The police have launched an appeal and are asking members of the public to come forward with any information that might help apprehending this violent carjacking gang before someone else is attacked and injured.

WATCH: Shocking attack on husband and wife by carjacking gang

Anyone who has any information relating to this incident please contact West Midlands Police via Live Chat or ring 101. Alternatively, call Crimestoppers anonymously on 0800 555 111. Please quote incident reference number 20BW/122688K/20.