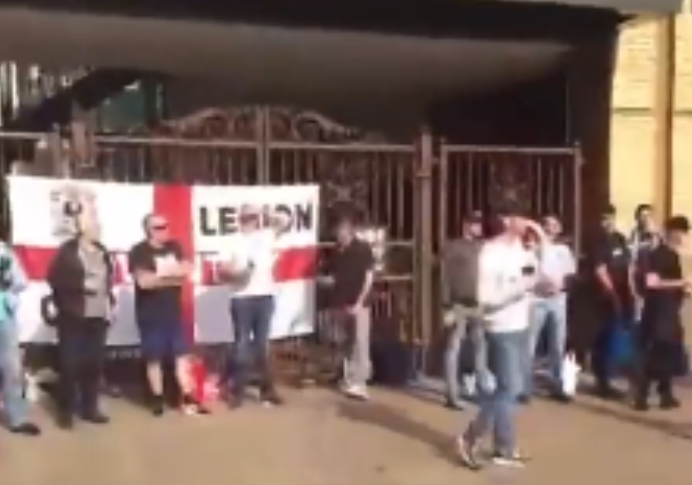 Police have launched an investigation into the terrifying incident which took place not far from the Lady Godiva statue in Coventry around 9:15pm on Tuesday night.

Several hundred football fans met yesterday in Broadgate Square in Coventry from 5pm to celebrate news that Coventry City FC had been promoted to the Championship.

Despite strict coronavirus restrictions in place the huge crowd failed to adhere to social-distancing guidelines and most of those in attendance appeared to be without face masks.

Smoke bombs were set off and bottles were smashed, and some members of the crowd were reportedly damaging and vandalising the Black Lives Matter placards that had been arrayed around the famous Lady Godiva statue by civil rights campaigners.

In a video that was shared on social media platforms last night some people in the crowd are allegedly heard calling for the posters and placards to be gathered together to “make a bonfire”.

Around 9.15pm some of the crowd chased two black youths who were not part of the football gathering.

There was an allegation that one of the two lads being chased had brandished a knife towards the group. This claim is currently under investigation by the police.

The disturbing incident was captured on film and has left viewers shocked and outraged at the behaviour of the crowd which some described as “a lych mob”.

The short video clip has been removed from social media platforms but can still be found on some pages.

The video appears to be filmed on a phone and begins by the area in front of the Cosy Club entrance. It is from the point of view of someone in a large crowd of people, around a hundred or so, a number of whom are dressed in the Coventry City FC colours.

The crowd can be heard making an enormous amount of noise as they surge and charge after the two lads down the small road between the Cosy Club and the HSBC building.

The atmosphere becomes tense and alarming as the area fills up with the baying crowd.

The video shows the lads being cornered in a dead end with the mob closing in. The victims duck behind some bins and try to avoid the projectiles being hurled at them by the enraged crowd.

Glass bottles and cans explode as they hit the wall where the two victims are sheltering and the contents shower over them and both of the lads are seen flinching in horror.

The crowd continues to shout intimidatingly at the two cornered lads, spreading themselves out and still advancing on them in a very aggressive manner.

Some members of the mob appear to be armed with what looks like short metal clubs in their hands.

A group of police officers arrives just as the violence is about to escalate.

The officers are seen pushing and thrusting their way through to the front of the crowd. They try and place themselves between the crowd and the two cornered lads.

One member from the crowd appears to shout “F*cking N*****s!”

A police officer is then seen handcuffing one of the cornered lads and searching for the alleged ‘knife’. After searching him and finding no weapons the handcuffs are removed.

Eventually further police officers arrive at the scene and charge through to the front of the crowd. They spread themselves out and begin to usher the yobs away from the victims.

The crowd continues to jeer and shout at the two traumatized lads as they are escorted away to safety.

The video ends with a police officer asking the person filming to stop and pushes the camera away.

Judging from the heavily charged atmosphere and mood of the hostile crowd “it is a miracle that the two boys walked away with their lives” according to online posts by those who have viewed the distressing video.

In another video that was shared on social media platforms, but has since been removed, shows a member of the crowd allegedly brandishing a knife at the two lads and a policewoman is seen pushing him away but no arrest is made.

There is mounting anger across social media posts tonight at the quick response by the white police officers to handcuff and search a black man, who was discovered to be unarmed after a search, yet a white man in the crowd is not apprehended or questioned about the weapon he is brandishing directly in front of the police officers.

He said: “This type of disorder is totally unacceptable and we have launched an enquiry into the violence and the damage to property.”

Coventry, which is hosting the City of Culture in 2021, has been left reeling after this alarming incident which happened within walking distance of Coventry Cathedral where the anti-knife crime sculpture entitled the Knife Angel was exhibited last year.

A spokesperson for Coventry City FC issued a statement saying the club had seen the troubling video and would be helping the police with any enquiries.

The club stated it has a very clear stance on rooting out racism in football and it supports the Black Lives Matter campaign.