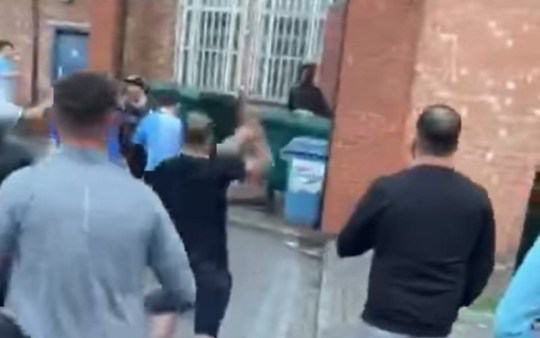 Police have launched an investigation and are hunting for CCTV and mobile footage of a terrifying and shocking attack against two unarmed black youths by a violent mob of Coventry FC supporters on Tuesday night near Broadgate Square.

The two young men were the “target of a violent attack from a large crowd” according to police.

Police have promised to “take action against offenders” who are identified as carrying out hate crimes following the terrifying attack against two black youths in Coventry by a huge mob.

The shocking incident took place not far from the Lady Godiva statue in Coventry around 9:15pm on Tuesday night.

The shameful attack has provoked indignation and shocked the people of Coventry, and police are taking the matter more seriously after online criticism and anger from those who have seen footage of the appalling attack.

The two black youths were chased by a mob, which some say numbered around a 100 or so, and a racist element was heard in the crowd as the crowd threw bricks and bottles at the terrified and defenceless victims who were cornered in a dead end with the mob advancing on them in a tactical formation to cut off any avenue of escape.

There were claims that the two youths were armed and this was the reason why they were chased.

However, police has issued a statement confirming that the two lads “were not found in possession of any offensive weapons” and they “were not arrested”.

Police officers arrived just as the horrifying attacks against the two lads were about to escalate.

Officers managed to escort the traumatized victims away from the scene in order to keep them safe from the hostile and jeering crowd.

There has been criticism from the public regarding the police handcuffing and search of the black youth while a white yob brandishes what appears to be a knife directly in front of the officers yet no attempt is made to arrest the man.

The video footage also allegedly contains audio from the crowd, both in Broadgate Square and in the dead end where the two lads are cornered, which is racist.

There was also a disturbing racist element in Broadgate Square prior to the two black lads being chased and attacked by the mob. The Black Lives Matter placards at the base of the Lady Godiva were vandalized and some members of the crowd were reportedly overheard making racial slurs and planning to set the placards on fire.

There is mounting anger on social media platforms with people asking why armed individuals in the crowd were not arrested.

After nationwide media coverage of this notorious incident, and following an online backlash for the lukewarm police response to the shocking ordeal endured by two young black men at the hands of a baying crowd described as a “lynch mob”, the police are now treating this case with more urgency and seriousness.

A police spokesperson said: “This kind of violence will not be tolerated in our city and we will take robust action against offenders.

“We are also investigating claims that some of the crowd were in possession of weapons.”

The police will also investigate accusations that this incident was a hate crime.

There has been a disturbing trend on neo-Nazi and right-wing online accounts that attack the religious background of the two black victims of this frightening attack. Online Islamophobia has been increasing since the coronovirus lockdown and this latest story is being used by racist groups to generate hate against minorities, including the Muslim community.

Police officers will look into the Coventry attack and anyone committing hate crimes will be prosecuted said the police spokesperson.

The investigation into this disturbing incident is currently underway and police are trying to establish exactly what happened and urging anyone with information or video footage that might assist enquiries to get in touch.