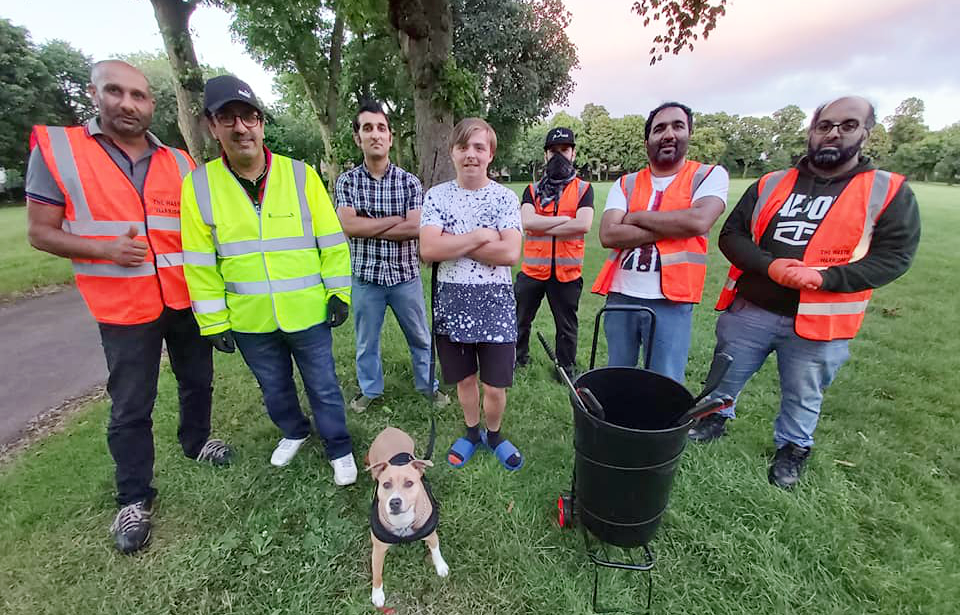 A team of Brummies are cleaning up waste in parks to make visitors feel safer (Photo: Ali Akbar)

A group of Brummies from Small Heath, who formed a group called the Waste Warriors to help motivate the community, conducted a major cleanup operation in Ward End Park on Monday.

The faith-inspired team were out in the Washwood Heath area of Birmingham on Monday afternoon to continue their community mission to cleanup local streets and parks and bring back a positive spirit for families who visit local parks.

Waste Warrior team leader Ali Akbar spoke exclusively to I Am Birmingham and he told us about the team’s recent cleanup operation in Ward End Park and his mission to do some interfaith work with Birmingham churches, synagogues and temples.

Ali explained the core concept behind the community volunteer project is to cleanup streets and parks in Birmingham which are plagued by leftovers from anti-social activity and disorder.

Ali said: “We headed to Ward End Park on Monday. We started the litter pickup from the car park going towards the Dolphin Centre and pond.”

When the team arrived at the pond area they immediately noticed a public health hazard.

Ali explained: “We noticed a broken tree had collapsed into the pond.

“The city council needs to remove the tree as it poses a hazardous risk to the public, especially children.

“A child could be tempted to climb the fallen trunk and end up falling into the pond and come to some serious harm.”

Some of the volunteers had taken the afternoon off work so that they could take part in the cleanup operation.

The Waste Warriors originally only had two members when the team was formed but Ali said the numbers quickly grew to ten as news of the team’s activities spread across social media.

During the cleanup a visitor to the park was inspired to join the team after seeing the Waste Warriors in action.

Ali welcomed the new member to the team and said: “During our cleanup, we also had another volunteer join us.

“Kurt takes a daily walk with his dog in the park and he decided to take part in the cleanup operation.

“We really enjoyed his laughter and he inspired the team with his positive outlook.”

Some of the rubbish collected in the park by the Waste Warriors included fast food wrappers, plastic cups, and the remains of a watermelon discarded on the grass after a picnic.

Ali said: “We saw leftover watermelon slices in the middle of the park.

“We would advise people to use the bins rather than leaving their rubbish on the grass. It attracts rodents.”

Another concern to the Waste Warriors team is broken glass, rusted tins and cans, and jagged ceramics that are dumped near the small children’s play area.

The danger of cuts and other health issues posed to children by this hazardous rubbish is serious.

The Waste Warriors also noticed lots of rubbish in a section of the park where a team was playing sports in the warm weather.

The volunteers removed the rubbish and spoke to some of the spectators and gave them some advice about the safe disposal of rubbish.

Ali explained that part of the cleanup operations is to engage with local people and inspire them to take pride in their local streets and parks. This involves chatting with members of the public when the Waste Warriors team conducts a cleanup.

The conversations are intended to guide and give positive advice to local residents to continue the good work once the Waste Warrior team completes a cleanup.

The park has great memories for some of the team members team members who grew up around the area and visited the park as children with their families.

Ali said: “Ward End Park is a good park. There’s lots of open fields for kids to play. And there’s also an area for smaller children.

“The park is also used for hosting community events including festivals which brings people together and generates a positive atmosphere.

“Hopefully, the park will be maintained by local residents and families will do their part in keeping it clean when they visit.”

The Waste Warriors team are also involved in youth work and visit schools and mosques to talk to children about the dangers of drugs and anti-social behaviour such as bullying and racism. Faith plays an active role for the team.

“We were born and raised in England, and this is our home. We must take care of it. We will motivate the young and tackle the litter and drug problem.”

The Waste Warriors are also committed to interfaith work in the community to help tackle prejudice and misconceptions.

The team recently cleaned up the area around All Saints’ Church in Small Heath. The church issued a statement after the cleanup by the Waste Warriors.

A spokesperson for the church said: “Father Julian was dreading having to clean up the front of our church building, which had become covered in litter and dirt.

“Luckily our friends from the Mosque were on hand to do a cleanup for us.

“The faith inspired Waste Warriors Group, have been busy clearing up dangerous drug needles and rubbish from parks and open spaces in Small Heath, and around the Birmingham area.”

Father Julian, from All Saints’ Church, said: “I was mighty relieved when Imam Zafar sent me a message to say that the guys had cleaned the front of the church. We are grateful for all that they are doing to make the local area the safe and pleasant place it should be.”

Ali plans to continue building connections between other faith groups to strengthen the community.

He said: “We plan to go to the Soho Road gurdwara in Handsworth, and also to Birmingham Central Synagogue in Speedwell Road, Edgbaston.

“We want to build bridges with other faith groups.

“We need to remove the fear so that we can build a stronger, safer, and more united community.

Ali added: “Cleaning up the local streets and parks, talking to local people, and inspiring children to play a role in looking after their areas will lead to a cleaner and safer place for us all.”