Hundreds of Birmingham City football fans march together against racism 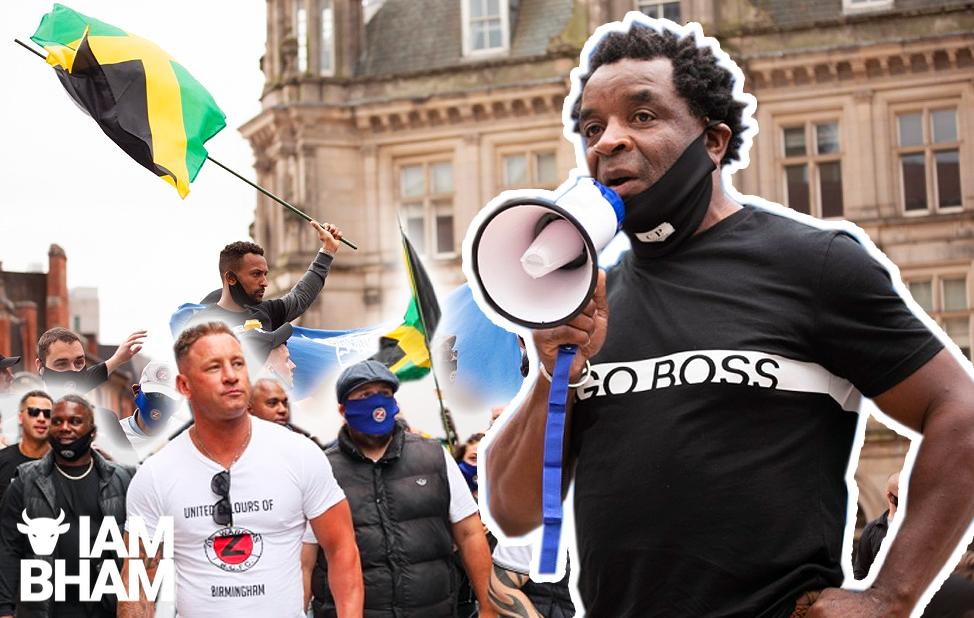 Hundreds of Birmingham City football fans marched through their home city this afternoon to stand against racism, in response to scenes of far-right violence in London last month.

Organised by former football ‘hooligan’ Marc Gauntlett and fellow Blues supporter Keith Batchboy, the protest walk set off from outside St Andrew’s stadium in Small Heath, made its way through Digbeth and ended in Victoria Square for a rally and speeches.

The anti-racist march was held to show solidarity with the Black Lives Matter movement, and in honour of local man Trevor Smith, who was tragically shot dead by armed police last year.

Despite the number of attendees estimated at around 300 by reporters and 2,000 by organisers, the event was a peaceful gathering of BCFC supporters from all backgrounds who joined forces to voice their solidarity against racism and hate.

Marc Gauntlett, who led the march with friends, hopes it will bring together football fans and former ‘hooligans’, “uniting people of all backgrounds against hate.”

Gauntlett was active in The Zulu Warriors hooligan firm which supports Birmingham City Football Club, and has left behind a life of violence related to hooliganism. Now reformed, he wants to show that football fans must rise beyond racist attitudes and challenge racism in the sport.

Speaking to I Am Birmingham, Gauntlett was keen to explain that while many hooligan firms are racist, he did not feel the Zulus were one of them, and is proud of their multicultural and multiracial membership.

“Many of the football firms, there’s s till a lot of racism going on. Some of the [Black Lives Matter] protests have been really good, really great, all mixed races… but it’d good to show that Black lives do matter as well as every other life, I fully agree with it to be honest with you.”

Following scenes of ‘hooligan firms’ and far-right agitators fighting police officers London last month, Gauntlett said he wanted to show not all football fans and groups were racist or violent. “Most of the people who went to London went to cause trouble”, he said.

Congregating outside the Birmingham City Football Club grounds at 12.30pm, numbers swelled as the march got underway just after 1pm today.

As the activists marched through Digbeth High Street, cheers were heard as they passed by a large street art mural spelling out the words “Black Lives Matter“.

David Hughes, a long-term Blues supporter and member of Keep Racism Out of St Andrews, joined the march to show his support.

“It was an impressive turnout and clear message to the Democratic Football Lads Alliance and the far-right they are not welcome at St Andrews,” he told I Am Birmingham.

“They like to present themselves as the voice of working class fans but this was the true voice, black and white supporters saying Black Lives Matter.

“Organisations like Birmingham Stand Up to Racism and Blues 4 All do great work, but hats off to the organiser of this march Marc Gauntlett. He lost a close friend and fellow Zulu, Trevor Smith, who was shot dead by police. It shows the racism and police shootings in the USA are also an issue here. That is why there have been quite a few Black Lives Matter protests here in Birmingham.”

In Victoria Square, speakers expressed unity and solidarity against hate. Amongst them was celebrated local grime artist and loyal Blues fan JayKae. Real name Janum Khan, the British rapper and actor from Small Heath cheered on supporters as they sang popular team chants.

Speaking into a megaphone at the base of the city’s iconic Queen Victoria statue, former city Zulu Walton “Wally” Wilkins, 56, told crowds that football fans “hiding behind the Zulu name” while spreading right-wing hate were not welcome.

“When we say ‘Black Lives Matter’, we’re not putting down anybody else’s life… we’re just uplifting Black lives at that moment. We’re not disrespecting anybody else. The majority of us here are Birmingham City fans, we go under the banner of ‘Zulus’, this is what it means.

“In 1982, the name came about in Manchester because of the large number of Black faces that were there. But when we shout or sing about ‘Zulus’, we’re not just singing it because we’re Black, it’s for everybody.

“You’re not offended to be called a ‘Zulu’, which is a South African Black warrior, so if you cannot be offended by the name Zulu, don’t be offended when someone says ‘Black Lives Matter’ because that is what we’re about.”

Responding to the eventful march and rally, co-organiser Marc wrote on social media:

“Wow, what I seen today was unreal we only expected a few hundred but there was close to 2,000 of Birmingham city’s finest, white, Black, Asian, every culture, young lads, older lads, and we shown the UK how we are.

“We are Birmingham city, one family, no matter what race or colour… BCFC! We wanna thank you all, we smashed it!”