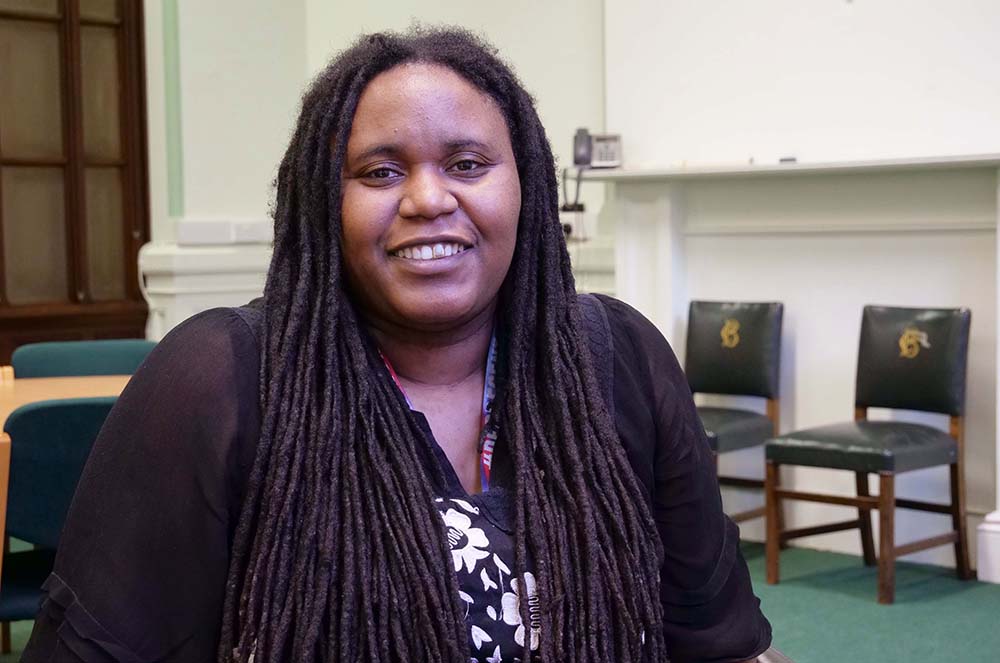 Sharon Thompson has been a Labour Councillor for the Birmingham North Edgbaston ward since 2014 and has a genuine passion to improve her local area.

Once homeless herself, and a single mother at an early age, Cllr Sharon Thompson is currently the Cabinet Member for Homes and Neighbourhoods and on the WMCA Housing & Land Delivery Board.

In her own words, she is not a “career politician.” She had a time when she was living on porridge only, often for a week at a time. Today, it looks like porridge gave her the strength to stand where she is today, to stand and speak strongly for homeless people, to speak for the larger BAME community as the diaspora representation. Morshed Akhtar caught up with Sharon Thompson to find out more about her journey.

What does your day-to-day job role involve?

This is a really difficult question to answer! It can change weekly depending on the priorities based on what’s happening locally, regionally and nationally. I am Cabinet Member for Homes and Neighbourhoods, so effectively I have delegated responsibilities and decision-making powers in the areas of Housing, Homelessness, Bereavement Services, Registrars Services and Localism from the Leader of the Council.

My day-to-day role includes reading and scrutinising lots of reports, high-level policy decision making, representing the city on various platforms from WMCA to EuroCities and being the spokesperson for the portfolio. Everyday I’m looking at casework and having meetings. I also get to visit organisations, groups and individuals in the community. I once said no day was ever the same, but in this pandemic every day is online meetings!

You are quite a family person. How do you juggle all your activities with family life?

Being a full-time politician whilst also mentoring others can be very time intensive. I often go through periods of ‘time poverty’ and, being very passion led, I have to say I can be a law unto myself. I have a very good core team who understand me, have my back and will challenge me when necessary.

They basically keep me organised and we set aside time to go through the diary – present day to six weeks ahead. This helps me preplan! I can often work out when a busy or difficult period will arise. To avoid burnout, I will schedule downtime or something to look forward to. It could be a few days off with absolutely nothing planned and watch Netflix, read a good book or take a break.

Juggling the community and political space against my home life can be some juggling act. I am very intentional with my personal time – self-care, time with the inner circle and hanging out with my son. You rarely see me at dinners and out networking in the evenings – I treat my personal time and private life as a treasured commodity. Although, if you ask my son or close family this same question, you may get a very different answer!

Your early life exposed you to poverty, homelessness, health issues and so on. How did you overcome these struggles?

Some circumstances you never really ‘overcome’ but become able to better manage with resilience. I made an active decision not to be a victim of life issues but to be victorious through them and that mindset has got me to where I am today. I won’t pretend that I did it all by myself – I didn’t. I had a few organisations and individuals throughout the journey who invested in me, because they believed in me, when sometimes I didn’t believe in myself.

St Basils and WAITS (Women Acting in Today’s Society) were instrumental, and I will forever feel indebted to them. There were individuals who walked me through some difficult times. Becoming a mother was a game changer. It was at that point I made an active decision to ‘be more’. I always said I didn’t want my son’s primary role model to be on telly. I wanted to show him you can achieve anything you put your mind to by using my life as an example.

What brought you into politics, how did you get started?

I often said ‘I don’t do politics’ without realising how involved I was already. As far back as 2005 I was attending consultations and roundtable discussions about barriers for women and ‘disadvantaged communities’ with Ministers at the Home Office with WAITS. I didn’t go because I was ‘political’ but because I was angry at the way things were for normal people like me! Through WAITS I also contributed towards a national policy toolkit aimed at assisting policymakers in decisions that affect lone parents in the workplace.

In 2007, I attended an Operation Black Vote programme and was sworn in as a Magistrate the following year. In 2008, I joined the Labour Party!

I wasn’t an active member until I went on an educational programme for women with an organisation called Changes. Through them I learnt more about politics and visited the EU Parliament and EU Commission. I was very sceptical about politicians – thought they were all the same! I was lucky to be able to shadow one and realised how hard some worked.

I had no ambitions of standing for councillor, until austerity really started to kick in! When you become really annoyed with politics that’s when politics needs you!

It can be very tough for women and I championed all-women shortlists in my local Labour Party branch (CLP). Through WAITS, I was a panellist on a debate alongside Speaker of the House John Bercow MP on the barriers for women entering politics. I supported my friend as she stood for councillor and became her campaign manager. Then I became the CLP Women’s Officer, Branch Chair and finally in 2014 I stood in my first election and was honoured to represent Soho Ward.

Being a Black woman, how different or difficult was breaking into politics?

It never stops being difficult being a woman in politics let alone faced with intersectionality! If you look at the trolling, abuse many women face in politics compared to men.

Then add ethnicity and again you see the struggles. It is tough as a Black woman in politics, but I still encourage more to step forward to become councillors. In Birmingham we have six Black councillors out of a chamber of 101, so we are still a minority. However, over recent months we have all become stronger voices particularly throughout the pandemic and in the aftermath of George Floyd’s murder.

Black, Asian and ethnic minority politicians have additional responsibilities to be a good (sometimes vocal) representative when it comes to their diaspora. Representation matters and given that it’s Black History Month I won’t expose the scars on this occasion – maybe that’s one for a book!

Apart from this political role, you’re involved in many other activities. What are some of the things that inspire you?

There are so many things that inspire me and it is mainly to do with people. It doesn’t have to be an elaborate act but seeing growth, tenacity and determination in others.

I never want to be a ‘ladder grabber’, so I like to support others in whichever way I can. Sometimes it can be as small as sharing a network or dedicating an hour a month of mentoring.

Why do you think Black History Month is important?

Black History Month is a great opportunity to celebrate the resilience, resourcefulness, experiences, achievements, culture and wisdom which can be found in the Black community. To educate, raise awareness and share with the wider community, breakdown stereotypes and have honest conversations in safe environments.

There are differences between each Caribbean Islands, African countries and UK diasporas. Black History Month is a great opportunity to share our past stories and recent history – which is absent from the curriculum – and set out a vision for the future.

Recent discussions around discrimination, injustice and inequalities demonstrate we are not close enough to an even level playing field. This makes Black History Month even more important in the current climate.

What message would you like to pass on to the Black (and ethnic minority) community today?

It’s been an incredibly challenging year, we have lost some amazing people along the way. This is the time to reflect on what is truly important and learn from what’s behind us.

The next chapter will not be easy, and tomorrow is not guaranteed – be present, articulate and ambitious. Actively engage in politics because political decision-making actively affects us all.

And what message would you like to pass on to the next generation in general?

When this generation passes on the baton, we should be aiming to pass it onto you from a stronger position than when we picked it up.

When you take the baton from us you need to continue to trail-blaze, progress and achieve what was unachievable in my era.

Don’t repeat the mistakes of previous generations; we made them for you to learn from not to repeat.