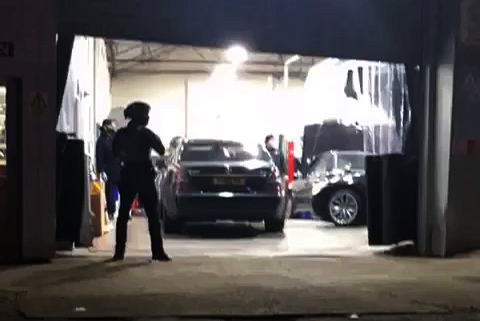 A raid by armed police at a garage in Stratford Road in Birmingham has taken place tonight, according to reports.

The site of the Mercedes Specialist Centre (MSL) in the Sparkbrook area of the city was raided by armed officers late this evening (1 December) as the incident was captured on camera by local residents at the scene.

Dramatic video footage documenting the raid shows a team of police officers dressed in black, and some in plainclothes but armed and helmeted, storming through the front of the independent Mercedes Benz specialists business unit with military precision.

Armed with rifles, the officers can been seen wearing bulletproof jackets and helmets with radio headsets.

A police helicopter was also reportedly hovering above the scene, monitoring the situation as the armed officers swept through the building.

The incident took place under cover of darkness but while the garage was still open, with its shutters raised, lights on and cars clearly visible inside the building.

A spokesperson for West Midlands Police said the specialist armed unit were investigating a suspected “firearms threat” at the garage.

The dramatic footage, which has been shared online, also shows the officers shouting warning instructions for those inside the garage to raise their hands and remain still.

In one of the videos circulating online the person filming the scene can be heard saying:

“Gun boys, move like Call of Duty, hands on your head man.”

Some of the clips shows specialist armed officers looking through the boots of the cars inside the MSL garage.

The tense footage also shows a group of armed police officers surrounding a ‘suspect’ in one corner of the garage, as local people can be seen watching the shocking scene unfolding before their eyes.

A number of videos are circulating online documenting the shocking incident. The various videos shows footage of the police operation at various stages, with some clips showing the dramatic moment when armed police storm the MSL building and other videos showing the officers departing in military formation back to their vehicles at the end of the operation.

Located on the A34 Stratford Road in a busy shopping precinct, the specialist car centre houses and repairs luxury and commercial vehicles as well as carrying out MOT testing.

The nature of the police action and raid has not been determined or formally announced as yet. I Am Birmingham have contacted West Midlands Police for more details.

This is a breaking news story and will be updated as more details emerge.

(Visited 5,832 times, 3 visits today)
https://www.iambirmingham.co.uk/2020/12/01/armed-police-officers-raid-merecdes-garage-stratford-road/https://www.iambirmingham.co.uk/wp-content/uploads/2020/12/vlcsnap-2020-12-01-19h38m04s401_pe.pnghttps://www.iambirmingham.co.uk/wp-content/uploads/2020/12/vlcsnap-2020-12-01-19h38m04s401_pe-300x201.png2020-12-01T20:27:42+00:00Abdul KareemCrimeNewsArmed Police Unit,B'ham,Birmingham,Brum,Call of Duty,community,Crime,England,Garage,Helicopter,I Am Bham,I Am Birmingham,Mercedes,Mercedes Specialist Centre,Midlands,MSL,news,Police,Raid,Sparkbrook,Sparkhill,West Midlands,West Midlands Police,WMPA raid by armed police at a garage in Stratford Road in Birmingham has taken place tonight, according to reports. The site of the Mercedes Specialist Centre (MSL) in the Sparkbrook area of the city was raided by armed officers late this evening (1 December) as the incident was captured on camera...Abdul KareemAbdul Kareem[email protected]AuthorI Am Birmingham
« Road safety crackdown will target Christmas home drinkers during COVID-19 pandemic
Birmingham e-scooter trial zone set to expand across the city this month »