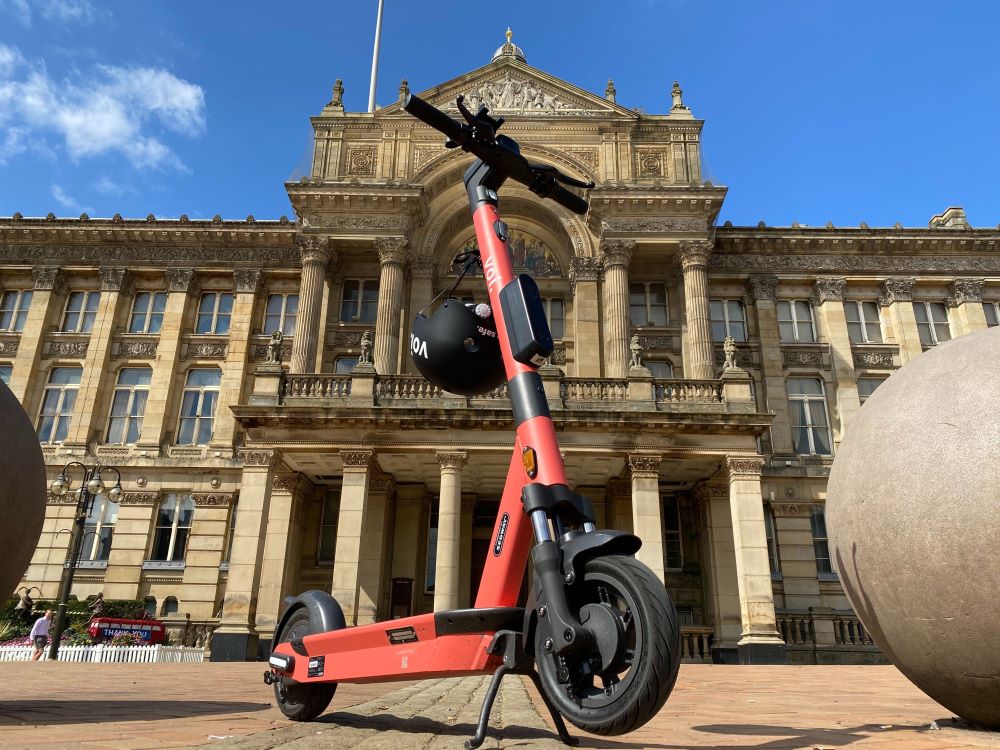 Voi scooters are set to be available in more areas across Birmingham following a successful trial period (Photo: BCC)

Bright orange scooters installed in Birmingham city centre in recent months as part of a new public transport initiative are set to be more readily available across other parts of the city.

Following on from a successful launch period, the operating area of the city’s Voi e-scooter trial will be expanded to the north and southwest of the city later this week, from Friday 4 December.

The expansion will include the A38 and A34 cycling corridors respectively, allowing people to reach key destinations by e-scooter including the University of Birmingham, Queen Elizabeth Hospital, Harborne High Street, and Selly Oak and University train stations to the south west; and Perry Barr, Aston Park, Handsworth Park, Lozells high street, and Birmingham City Hospital to the north.

TfWM, part of the West Midlands Combined Authority (WMCA), appointed Voi as the sole operator of the 12-month West Midlands e-scooter trial for the region back in September. Private e-scooters are not permitted as part of the trial.

The trial zone initially covered the immediate vicinity of Birmingham’s city centre; however, there was always an ambition to expand the trial zone as the trial progressed.

Since launch, Voi’s shared e-scooters have clocked over 75,000 km and more than 38,000 trips with more than half of all users being repeat customers. The expansion is expected to reach approximately 150,000 residents, allowing for a greater range of trips and offering a viable alternative to public transport while social distancing measures are still in place.

Public operation of the vehicles involves individuals over the age of 18 unlocking an e-scooter using a downloadable app in order to travel on them. A valid UK driving licence, full or provisional, is also required to use the scooters.

Voi, Transport for West Midlands and Birmingham City Council been working closely with the emergency services, key stakeholders and businesses on e-scooter safety since the launch. Voi have also been providing free helmets to new users and running several in-app campaigns on riding safely, rules of e-scooters and where and how to park.

The Swedish company has also taken measures to protect riders against COVID-19, equipping all handlebars with anti-bacterial copper tape and ensuring the vehicles are regularly disinfected. During the lockdown period, the Voi-4-Heroes programme gave NHS workers, emergency service personnel and the armed forces free rides, an initiative that was welcomed by the local community.

Richard Corbett, Regional General Manager of UK, Ireland and Benelux for Voi, said: “We are delighted to see how Brummies are increasingly adopting this safe, accessible and carbon-neutral way to travel. This expansion will make shared scooters available to a wider group of the population in Birmingham, replacing short car journeys and therefore contributing to creating a safer and greener city for all.”

Birmingham City Council’s Cabinet Member for Transport and the Environment, Councillor Waseem Zaffar said: “It’s been great to see people riding around our city centre on e-scooters and, working with TfWM and Voi, I’m delighted with how the trial has progressed.

“This expansion will make them much more accessible in residential neighbourhoods and communities, providing another alternative to car for those short journeys.

“It’s another step towards improving air quality in our city and creating a nicer environment for us and our families to work, rest and play.”

Andy Street, the Mayor of the West Midlands, added: “E-scooters have proved very popular in Birmingham city centre, and so it is great news that the trial zone is being extended. This will enable more people to use them to travel to a much wider range of places – such as Birmingham’s university campuses.

“Of course this is a West Midlands-wide trial of e-scooters, and we are working closely with other local authorities to bring more trials to more of our town centres over the coming weeks.”