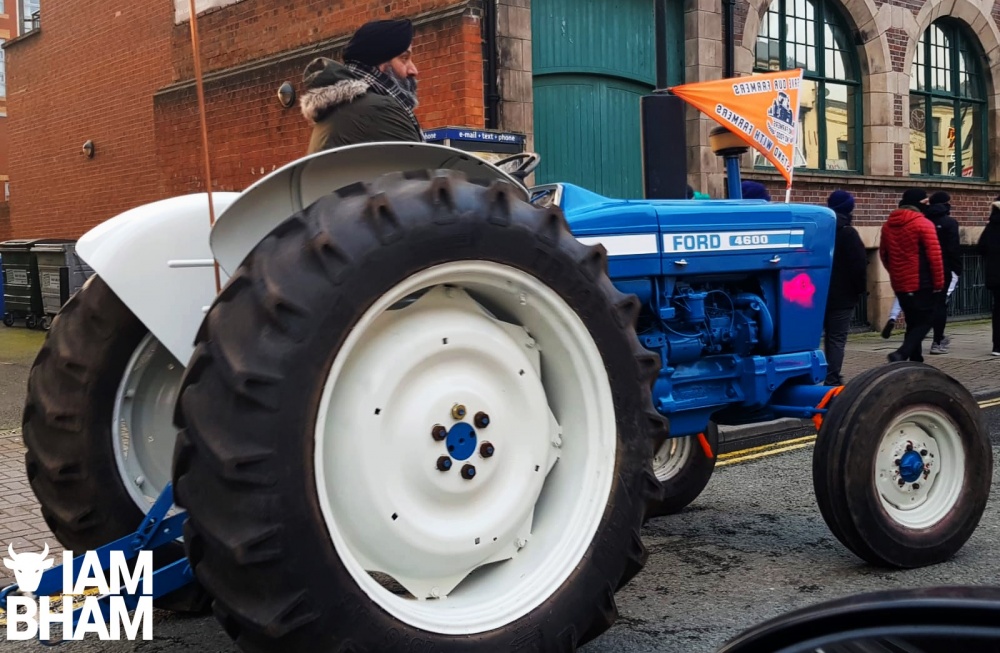 A tractor ploughs its way towards the Indian consulate in the Jewellery Quarter in support of Punjabi farmers (Photo: Emma Ward)

Thousands of British Sikh protestors arrived in cars and tractors outside the Indian consulate today in the Jewellery Quarter to show solidarity with Punjabi farmers who are battling against controversial new laws in India which threaten livelihoods and human rights.

People drove to the rally in cars, trucks, and tractors to show their support for farmers who are facing an uncertain future as the Indian government implements new farming regulations.

Parts of Sandwell and Birmingham came to a standstill today (12 December) as a convoy of vehicles of all shapes and sizes lined roads heading in the direction of the Indian consulate in the Jewellery Quarter.

The Hockley flyover, which is usually very busy, was brought to complete gridlock as protestors arrived to show solidarity with a cause that could affect lives around the world.

The Kisaan Car Rally was a response to the new farming laws implemented by prime minister Narendra Modi in India. These radical new reforms are seen by many as unfair and unjust.

The BJP ((Bharatiya Janata Party) government of India introduced three new agricultural bills in June without any consultation or input from farmers or unions.

The Kisaan unions were outraged at the new laws which remove price guarantees that safeguard the livelihoods of farmers who are already living on tight economic margins.

Many Punjabi farmers feel that the new reforms, which was passed by a government who refused to listen to their precarious predicament, will lead to the ‘ruin’ of farming families who have worked in the agricultural sector for generations.

The farmers also fear the new reforms will lead to debt and the very real possibility of their land being ‘snatched’ away by the authorities. In fact, there has been a spike in suicides amongst Punjabi farmers which can be traced to debts brought about by unfair practices.

The new reforms by the Indian government also leave farmers open to exploitation by huge multinational corporations who are more concerned about profit margins and less about fair trade and human rights. Farmers from the Punjab and Haryana regions bore the brunt of the new laws.

For millions of people in India farming is seen as the very ‘heartbeat of the Punjab’ region. A huge percentage of the Punjabi population is either working in farming, or are linked to farming through their families. In Punjabi tradition the soil of the Punjab is viewed as the ‘lifeblood of the people’ because it was made fertile through the blood, sweat, and tears of the forefathers.

The heritage, arts, culture, and economy of the Punjab is filtered and influenced by farming. The roots of that legacy are now under serious threat, and Punjabi farmers not only risk losing their jobs and homes, but also their heritage.

The violent repression by the Indian government caused outrage and the shocking footage of the clashes was shared around the world.

Sikh MP Tanmanjeet Singh Dhesi (Lab, Slough) addressed Boris Johnson during prime minister’s questions on Tuesday (8 December) and raised the question of the Punjabi farmers and the abuse of human rights by the Indian government.

“Many constituents, especially those emanating from Punjab and other parts of India, and I were horrified to see footage of water cannons, tear gas and brute force being used against peacefully protesting farmers,” said Mr Dhesi.

Some of the protestors at the Birmingham Kisaan Car Rally, in the Jewellery Quarter, showed their displeasure for Indian prime minister Modi’s highly contentious farming bills and his abuse of human rights by venting their frustration on an effigy of the controversial and divisive politician.

Modi’s effigy was attacked with slippers and shoes by the bystanders, who were in a jovial mood, outside the Indian consulate.

Despite the anger felt by the protestors about the ordeal suffered by the Punjabi farmers, as a direct result of prime minster Modi’s agricultural reforms, they remained peaceful and there were no police reports of violence during today’s rally in Birmingham.

Protestors against the new farming reforms claim that deregulation of the sale of crops in India will result in mass exploitation and abuse which will ultimately result in inferior quality produce at higher prices.

The impact will be felt by people around the world because some of the essential spices and raw food supplies which are so popular in the West are sourced directly from India.

Popular and essential crops such as rice, maize, peanuts, wheat, and fruits such as mangoes are grown and sold by Indian farmers. India is one of the top three suppliers of these crops and also one of the largest sources of beef and milk in the world. The Indian poultry industry is also seen as a highly important source of supply for fast food giants in the West.

It is not only foodstuffs that are at risk but also material such as cotton. India is the world’s biggest producer of cotton and Punjabi farmers are key components of the trade yet they see little in the way of profits which are unfairly distributed by the Indian government.

The plight of the Punjabi farmers has also galvanized the hearts of Indian diasporas around the globe. Punjabi communities in Canada, USA, and the UK have expressed their support for the Indian farmers.

A rally outside the Indian High Commission in London on December 6 drew over 10,000 peaceful protestors while twelve other UK cities hosted rallies on the same day for Indian farmers.

The rally started around 10:30am at Guru Har Rai Gurdwara Sahib in West Bromwich before heading off to the Indian consulate in the Jewellery Quarter where it was expected to end around 1pm.

West Midlands Police warned motorists of delays around the affected areas and advised protestors, who were planning on joining the rally at a later time, to refrain from attending and adding to the traffic congestion.

The protest was monitored by the police and there were no reports of any major security issues.

Protestors are hoping this solidarity rally in Birmingham will put pressure on the Indian government to make some positive changes which will protect farmers and their families, and introduce fair trade practices that will remove the current uncertainty and fear.