INTERVIEW: Ruth Jacobs on celebrating Hanukkah in Birmingham during COVID-19 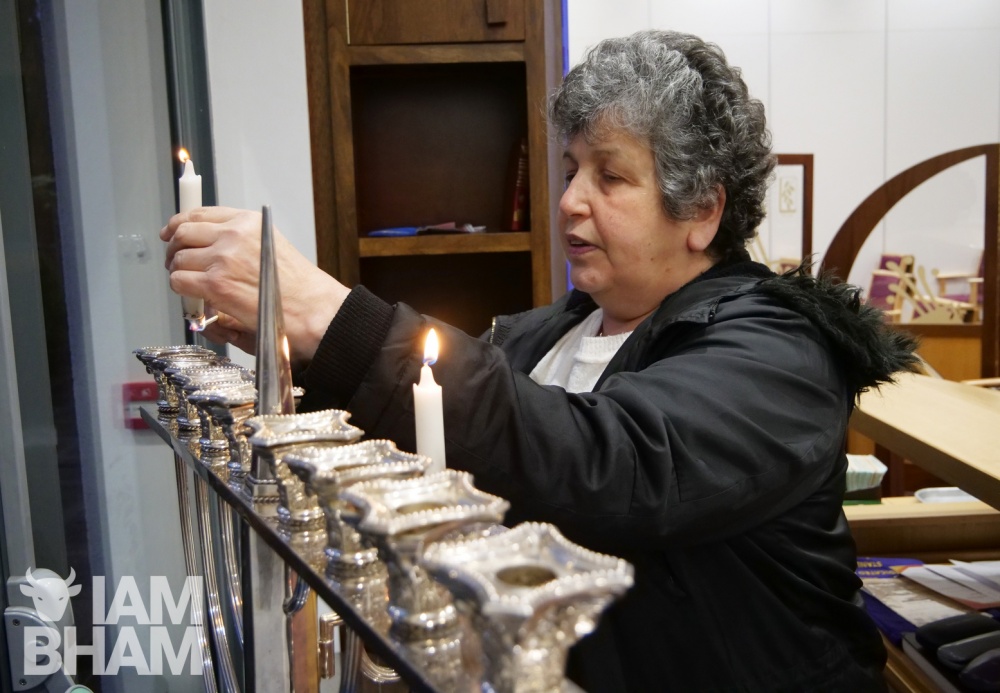 The Jewish festival of Hanukkah – also spelt ‘Chanukah’ –  began last night for Judaism’s faithful followers across the world and indeed, in Birmingham and the West Midlands too.

While festivities are less visible and quieter than usual due to national coronavirus restrictions, the region’s Jewish community continues to persevere and is marking the eight-day ‘Festival of Light’ as best as they can, combining limited activities in synagogues with more accessible services online.

We met up with Birmingham Central Synagogue member and Jewish West Midlands community leader Ruth Jacobs to find out more about the significance of Hanukkah and how COVID-19 has impacted festive observance of the celebration in the city.

Ruth, what is Hanukkah?

The festival commemorates the fact that Jews were under persecution to by the Greeks to forget about Judaism and become very Greek-orientated, and a series of restrictive measures was imposed over a number of years until the Jews rebelled. A small group of Jewish men and women rebelled against this and, against all odds, they managed to defeat the Greeks.

The Greeks were trying to absorb the Jews into their own culture and one of the things they did when they came to Jerusalem, where the the Temple was, was they desecrated the Temple. When the Jews were eventually able to get back into the Temple, there was a candelabra not with eight lights but six, which lit the Temple day and night. There was only one cruse of oil, one jug of oil that was left to keep the candelabra going and, as a result, people were sent out to go and find some more oil.

But the miracle of Hanukkah is that the oil lasted for eight days and eight nights as opposed to only one, which was the measure that was there. So as a result of that, we celebrate Hanukkah every year with lighting these candles. Some people use candles, some people use oil, and it’s a very happy festival.

It also celebrates the significance of freedom for Jewish practice and and the freedom of being able to have the Temple, and getting everything that was important to Jews back again. Because the Greeks had tried to hellenise them to such a degree that they’d forbidden circumcision, they’d banned kosher food, they’d forbidden studying and synagogue services and so this was something that was regained and it’s very much important.

We celebrate the the fact that the was of great significance by eating food which is prepared with oil like doughnuts (sufganiyah), fried potato cakes (latkes) and things like that. It’s also a tradition to give the children Hanukah money, it’s called ‘Hanukkah gelt’; and it s also become a tradition to have presents to give each other gifts.

As you can see here, the menorah is in the synagogue and it will be lit tonight when the service happens at 7 o’clock, but we also have these in our own home as well, so every Jewish home will be celebrate which is celebrating Hanukkah tonight will be lighting or have lit the candles already. We tend to light them as it just gets dark so that that’s happening here.

The synagogue, in non-COVID times we would have probably had some celebration here but as we’re only allowed to be in here for as short a time as possible, we aren’t having and we can’t all gather together so we re having a Zoom event. This synagogue is having a Zoom candle lighting followed by a Hanukkah quiz, and other synagogues will be having their own celebrations either with music, but it’ll all be on Zoom.

Then the community as a whole, we are having on Thursday (December 17) afternoon a civic celebration. We usually have this in the Council House and we invite civic dignitaries to light the candles with us but this year, because we can’t do it, we’re going to do it on Zoom.

Where is the Birmingham Central Synagogue?

This synagogue has been on this site for nearly sixty years but five years ago it moved into this building which is an open communal space that can be used for all sorts of different things.

We’re standing in the synagogue itself now and before, you were in the in the deli that’s been established here as there’s no kosher food supply shops here in Birmingham, apart from a little bit in some of the supermarkets.

We have our own deli here which serves the whole of the community across the West Midlands and beyond, people come from beyond for that.

We’re very grateful to have this facility that this synagogue provides as are all the customers who come from across Birmingham’s Jewish community.

How important are synagogues to the city’s Jewish community?

Each synagogue has its own membership so people affiliate with one particular synagogue for whatever reason, and so while there is cooperation between the synagogues, there is a definite feeling of belonging to one.

So this synagogue has a fair number of members, about 150 members, and there are synagogue services here twice a day, and on the sabbath and holidays. So people come here at the moment, you can see it’s set out for the COVID regulations and we can sit and accommodate 34 people in this space, as per the regulations.

Otherwise when it’s normally set up, it could be for 120, but because everything’s movable, if you have a bigger function, the doors open and you can you can seat more people.

How has COVID-19 affected Jewish celebrations?

It’s been very difficult, I mean we haven’t had a single festival since March that we’ve been able to celebrate with family and friends. The Passover, Shavuot, the high holy days of Rosh Hashanah and Yom Kippurs and Sukkot, we’ve had to celebrate them
on our own; and when we’ve been able to come to the synagogue for the service, that’s been nice to see people, albeit it socially
distanced but we haven’t been able to do the traditional sort of entertaining of family and friends in our own home, so it’s been very hard.

This year, well as we’re in this Tier 3 lockdown or whatever you call it, the Tier 3 situation, we’re not with our children or grandchildren, we aren’t personally. It’s sad but on the other hand, we’ve experienced so many festivals now like this that we’ve got get a bit used to it and just hope that the day will come when we’ll be able to celebrate again.

What is your Hanukkah message?

I think it’s very significant that Hanukkah this year has fallen on the United Nations designated Day for Human Rights and so I would say that what, whereas we’ve learned during COVID to be kinder to each other, the situation in the world is that many people’s freedoms – which this festival signifies is important – are limited.