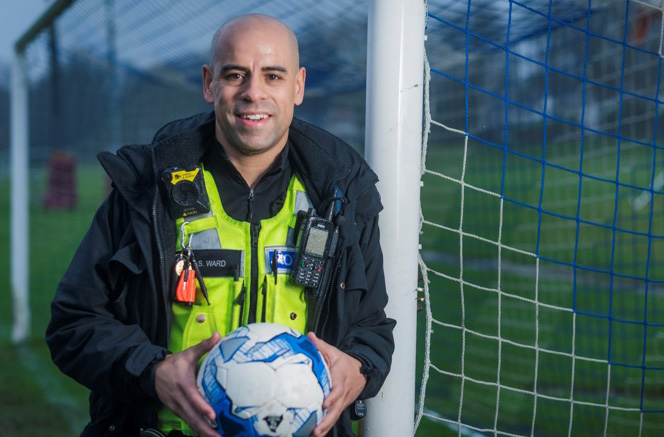 An officer who has personally experienced racist abuse has been appointed to lead West Midlands Police’s efforts to tackle hate crime in football.

PC Stuart Ward has become the UK’s first dedicated hate crime officer based in a football unit and will be at the forefront of work to stamp out rising abuse against footballers and fans.

Revealing that online abuse related to the sport had become increasingly prevalent online, the force said this new designated role would give them “greater ability to investigate offences.”

34-year-old Ward, who was the victim of racism as a young footballer himself, said: “I’m mixed race and growing up I was racially abused. I remember being 11-years-old and playing football for a junior side.

“It came from another player and the thing that stuck with me was how no-one did anything about it, other than my mum who stopped the game and took me off the pitch.

“There were parents, match officials, the other players – who were old enough to know right from wrong – who didn’t challenge the comments or support me.

“So having sadly been subjected to discrimination I know the feelings and the impact it can have on you.

“I feel I’m in a position where I can offer help and support, while looking to take action against those involved.”

The role will include investigating complaints of hate crime linked to football, monitoring online interactions and working with the region’s clubs. This includes both professional and amateur level to highlight what is an offence and the importance of reporting it.

In a statement, West Midlands Police said Ward’s understanding of “the emotional impact of abuse” means “he can provide support to victims while knowing what they’re going through”.

The announced that he will also be going into schools to educate children around discrimination – continuing the on side youth and yellow card intervention and prevention programmes – and link in with other bodies such as English football’s equality and inclusion organisation Kick It Out.

Stuart will also work alongside other members of the force’s football unit to monitor any offences when stadiums re-open following the COVID-19 pandemic.

Under current legislation, a range of offences including abuse connected to race, sexual orientation, disability, religion or gender can constitute hate crime.

According to WMP, there were 287 reported hate crime incidents connected to matches in England and Wales last season, with Kick It Out adding there had also been a 42 per cent rise in reports of discrimination last season.

“We need to change this culture, we’re a multi-cultural society and it’s important we educate people around hate crime to stop it happening,” explained Ward.

“Clearly, we’ll look to take enforcement action too and won’t hesitate to take people to court where appropriate.

“I’ve spent 12 years as a response officer – along with some time as a football spotter – and I’m proud to have been given the role as dedicated football hate crime officer.

“I enjoy the game and want everyone else, whatever their background, to feel comfortable in doing so too.”

Sgt Lizzie Lewandowski, of our football unit, added: “It’s incredibly sad to see football – a game for everyone – being used by some to fuel hate crime.

“Abusing a footballer or another fan for the colour of their skin, sexual orientation, for having a disability or their religion can never be confused for ’banter’.

“We’ve seen a rise in unacceptable vitriol online – particularly since stadiums have been empty – and it’s a real focus for us, alongside our ongoing intervention and prevention work with clubs.

“We hope the appointment of Stuart as a dedicated hate crime officer will help put us at the forefront of changing, challenging and stopping such appalling behaviour.

Anyone who has been a victim of a football-related hate crime, or has information about an offence, can make a formal report by calling West Midlands Police on 101 or via their website.