Protestors march through Birmingham city centre in solidarity with Palestinians 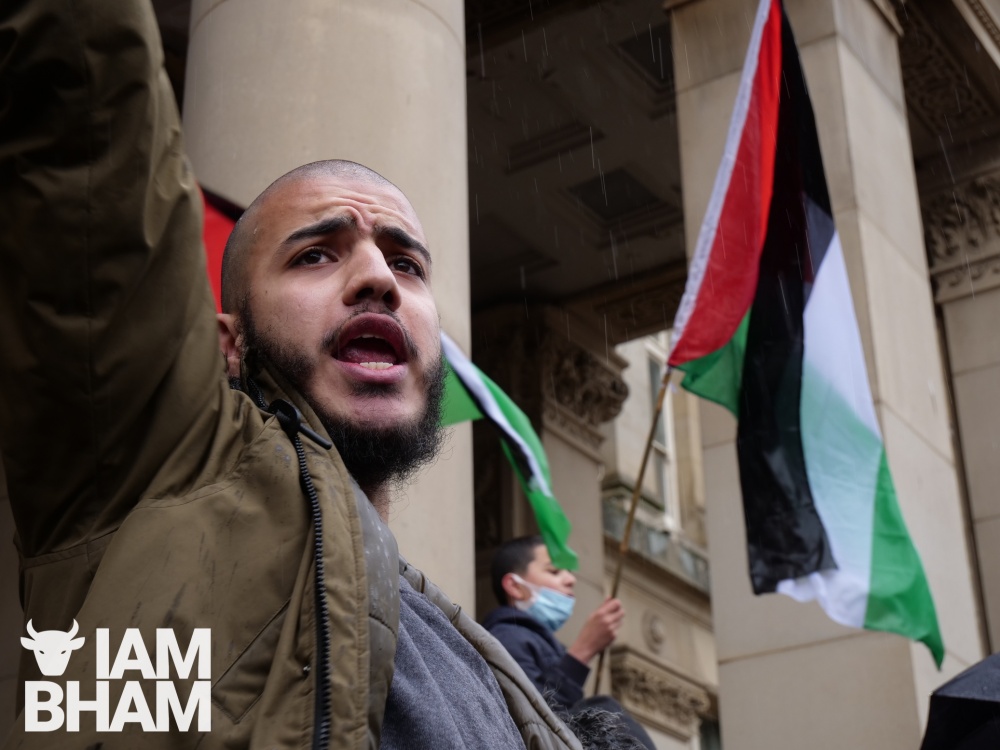 Over a thousand people gathered in Birmingham this afternoon to protest in solidarity with Palestinians amid the ongoing Israeli military bombardment of the Gaza Strip.

Passions were running high as between 1,500 and 2,000 people turned out in Victoria Square to show solidarity with Palestine before marching through the city centre, waving banners and chanting slogans.

Gathering outside the Birmingham City Council House from 2pm, the rally was led by speakers representing anti-war organisations, trade unions and anti-racist groups.

Braving the rain, attendees held up placards and home-made signs calling for an end to air strikes in the Middle Eastern region and for the UK government to intervene. The action comes after thousands of Palestinians were forced to flee their homes after days of sustained attacks.

After an hour of speeches and chants, activists brought together their banners and flags for an impromptu march, as a river of protesters flowed through New Street and High Street before looping back towards Colmore Row and returning to Victoria Square.

Chanting “Free Palestine”, families, students and community leaders joined the rally – the fourth in Birmingham in a fortnight – calling for peace and justice in the Middle Eastern region.

“What could I possible say to truly express this appalling injustice against the Palestinian people? In just this last week we have seen the murder of over a hundred Palestinians including children as young as a few months old, in just a few days.

“The racist policy of evicting Palestinian families from their homes to make room for Jewish settlers, attacks on Palestinians in East Jerusalem at the Al-Aqsa Mosque, even when in prayer during the holy month of Ramadan.

“As a mother and a grandmother, I can’t begin to imagine the terror that struck the hearts of children when missiles were raining down… and burst into their homes. I can’t begin to contemplate the helpless fear of parents unable to protect them.”

“We will not ignore the suffering and racist oppression and state-sanctioned murder of the Palestinian people. Their struggle is all our struggle. We must call on the UK government to stop selling arms to Israel.

“We will demand the UK government impose sanctions on Israel… and we must keep coming out onto these streets in Birmingham and everywhere for protests like this in greater and greater numbers.”

Naeem Malik, representing the Palestine Solidarity Campaign, demanded an end to Israeli air strikes and called for international action against the country if they continued to illegally occupy Palestinian territory.

“There should be sanctions applied and all trade that comes from illegal settlements in Palestine should be made illegal.”

Malik also said he had invited all of Birmingham’s MPs to the protest but none appeared to have attended.

He added: “The Palestinians will know that they are not alone and we are standing with them and that will give them courage.”

In response, Palestinian militant group Hamas fired hundreds of rockets towards Israel. Israel retaliated by attacking the Gaza Strip with tanks and air strikes, killing at least 126 people in Gaza, including 31 children and 20 women, while seven people have been killed in Israel including a child.

Saturday’s demonstration in Birmingham was organised by the Palestine Solidarity Campaign with support from Stop the War Coalition. A similar protest in London today reportedly attracted over 100,000 people while rallies and marches have also taken place across the UK.

In Wolverhampton, around 100 people gathered with banners and Palestinian flags in the city’s Queen Square to show their support for the cause.

United in their call to action, a spokesperson for today’s Birmingham event said: “They [the Israeli government] don’t want to hear our voices raised in support of the Palestinian struggle here either. They want us to be silenced. We will not be silenced.”