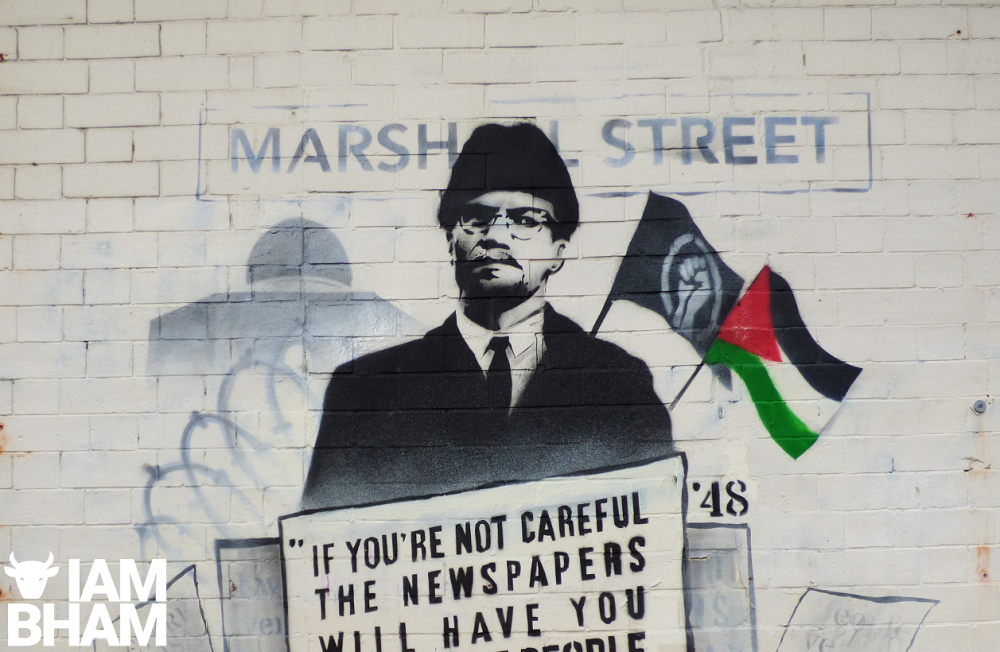 A striking new mural depicting the historic visit of civil rights activist Malcolm X to Smethwick in 1965, has been unveiled in Birmingham as a show of solidarity with the plight of the Palestinian people.

The topical artwork – created by Birmingham based artist Mohammed Ali – reflects on the current escalation of the Israeli-Palestinian conflict which has resulted in worldwide protests, including in Birmingham.

Painted in Kings Heath High Street, Ali posted photos of the street art to social media earlier today and has already received around 500 retweets and over 1,300 likes on Twitter, with hundreds more ‘likes’ and shares on Facebook.

From murals on global poverty and stencil tributes to the political activism of Nelson Mandela and boxer Muhammad Ali, the 42-year-old is no stranger to touching on often popular but polarising topics, including previous visual commentary on Gaza, Palestine and the Black Lives Matter which have been removed by authorities.

In 2018, Ali spray-painted art in Digbeth depicting a disabled man using his sling against a tank while sitting in his wheelchair. According to the artist, the silhouette of the man was framed in the crosshairs of a gun sight to highlight the tragic oppression suffered by the Palestinian people.

As the situation between Israel and Gaza continues to escalate, with 200 Palestinians dead, including 59 children, and countless hundreds wounded, the Birmingham based artist is once again using his talents to show solidarity with the besieged people.

In his latest work, the artist has combined the historic visit of Malcolm X to the West Midlands with a quote by the civil rights activist illustrated like a newspaper headline:

The freshly painted street art shows Malcolm X standing next to the Marshall Street sign in Smethwick, recreating his famous visit in 1965.

Malcolm X, a champion of civil rights, had come on a visit of solidarity to Smethwick after accepting an invite from Avtar Singh Jouhl who was the secretary of the Indian Workers’ Association. The visit was in the wake of shocking cases of racism and civil division in the area as political tensions were running high in the West Midlands at the time.

The renowned US activist is depicted with Jerusalem’s Al-Aqsa mosque behind him, surrounded by barbwire.

The mosque was the location recently stormed by Israeli security forces during Ramadan while Palestinian worshippers were praying, during which rubber bullets, tear gas, and sound bombs were fired on those inside.

Also featured is the number “48”, no doubt a reference to the 1948 Palestinian exodus, which occurred when more than 700,000 Palestinian Arabs – about half of pre Palestine war population – fled or were expelled from their homes. The exodus was a central component of the fracturing, dispossession and displacement of Palestinian society, a traumatic and seismic event known as the Nakba.

Sharing his new work on social media platforms, Ali wrote: “I painted this fresh this morning – on my local High Street in Kings Heath Birmingham.

“Marshall Street is where Malcolm X came to in Smethwick – days before he was assassinated. He was invited by the Indian Workers Association in support of their cause fighting racism.

Ali also commented on some of the support he had received as he painted his new political art outside the Art Rooms workshop.

“I had a few cars honking – it was nice to feel the love and support for the cause.”

The award-winning artist is well known for producing street art which resonates with diverse communities in Birmingham and sheds a light on human interest stories and current affairs.

While much of Ali’s work is done with the consent of building owners at locations he selects for his work, he does sometimes face challenges from authorities.

Last year, a piece entitled ‘I Can’t Breathe’, which highlighted the brutal racist murder of American George Floyd by a white police officer, was removed by a council worker hours after it was painted in Kings Heath. But after Ali contacted Birmingham City Council, an apology was issued and the work was repainted by the artist, with a protective glass cover placed over the tribute.

In response, Palestinian militant group Hamas fired hundreds of rockets towards Israel. Israel retaliated by attacking the Gaza Strip with tanks and air strikes, killing at least 200 people in Gaza, including 31 children and 20 women, while ten people have been killed in Israel including a child.

In a recent report from Human Rights Watch says, Israel is committing the crimes of “apartheid” and persecution against Arabs in the occupied territories and Israel itself. Apartheid amounts to state-sanctioned racial discrimination and is considered a crime against humanity.

The organisation said says Israel has a policy “to maintain the domination by Jewish Israelis over Palestinians”, including those who are its citizens. The charge of apartheid was also echoed by Israeli human rights group B’Tselem.

On Saturday, a demonstration in support of Palestine was held in Birmingham, attended by over 1,000 people. The rally was organised by the Palestine Solidarity Campaign with support from Stop the War Coalition. A similar protest in London attracted over 100,000 people while rallies and marches have also taken place across the UK.

A spokesperson for today’s Birmingham event said: “They [the Israeli government] don’t want to hear our voices raised in support of the Palestinian struggle here either. They want us to be silenced. We will not be silenced.”